Synopsis: This account, written by two architectural woodworkers, details the construction of a beautiful fence around an historic Federal-period house in Portland, Maine, adjacent to a museum. The project required 7,000 board feet of Honduras mahogany, all of it meticulously patterned and joined.

The fence in front of the 1800 McLellan Sweat mansion in Portland, Maine (now an annex of the Portland Museum of Art), was a classic of Federal-Period craftsmanship. It incorporated elaborate and finely detailed woodwork, especially in the small moldings and carving that mimicked the portico and roof balustrades of the house. Over the years, the fence had been neglected and vandalized, but when the Portland Museum of Art was funded to build a large modern addition, the architects decided to replace the deteriorated fence with a replica, and to extend it to the corner of the proposed building to draw old and new together. Our shop, the Woodward Thomsen Co., won the contract. We specialize in architectural woodworking, and we’ve done a lot of historic restorations.

Working with the project architect, we chose a large and small post, a rail section, and a large and small urn to use as models. To ensure quality and precision, we decided to do as much of the work as possible in our own shop.

The architect specified Honduras mahogany for most of the fence — about 7,000 bd. ft. of it. He also specified that all of the millwork had to be dipped in a 5% pentachlorophenol solution (available under various brand names at most building-supply houses) for at least five minutes. Since this stuff leaves a waxy film on the wood, we had to keep gluing after dipping to a minimum. In order to dip large and long glued-up pieces, we had a 1-ft. by 2-ft. by 16-ft. tank fabricated from sheet metal. We bought the dipping solution in a 55-gal. drum and poured it into the tank. Penta does an excellent job of discouraging rot, mildew and insect borers, but it can be dangerous to handle. We did our dipping in a room with an exhaust fan, wore rubber gloves and clothes, and spent no more than one or two hours a day dipping.

Construction started with the posts. There were seventeen 12×12 posts and four ones. Each would be built as a hollow box in the shop and then slipped over a pressure-treated 4×4 southern yellow pine structural post sunk in the ground. We decided to build each post box around two interior frames of 3-in. thick pine, as shown in the drawing at left. These mitered frames would provide enough solid material to anchor the railings to, and would let us slip the post boxes over the structural 4x4s (which are really 3 1/2 in. by 3 1/2 in.) with some room for adjustment.

From mahogany boards at least 12 in. wide, we cut 84 8-ft. lengths. We didn’t face-joint these boards because we knew the box construction would straighten up the stock. The rough stock was a generous 1 in. thick, so we were able to get a net thickness of 7/8 in. after passing it through the planer three times, flipping it after each pass. After planning, all the stock was jointed on one edge. We ripped the front and rear pieces 12 1/16 in. wide, and the side pieces 11 in. wide; then we routed a strong 7/8-in. by 3/8-in. rabbet in the front and rear pieces to accept the side pieces. 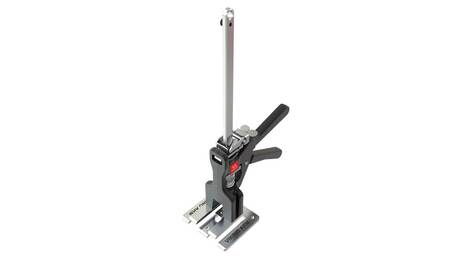 The Viking Arm by Massca Products can lift up to 330 lb. and is usefully for a tasks from snapping in flooring to installing doors.