Synopsis: A K’ang is a 2,000-year-old masonry heater design that is installed beneath a floor. It’s designed to burn a little bit of wood at high temperatures and store the heat. This article explains how one is built.

Karl Marcus, a stonemason in Missoula, Mont., was experienced in building Russian fireplaces, and he wanted to include one of these masonry stoves in his passive-solar addition, a south-facing greenhouse/office. But Marcus didn’t want to sacrifice any of the floor space (170 sq. ft.), which was at a premium in his older home. The solution was to build a masonry stove beneath the addition’s floor.

Marcus’s idea wasn’t a new one but rather an adaptation of an ancient, multi-cultural tradition. In The Book of Masonry Stoves (Brick House Publishing Co.), David Lyle writes that the ancient Roman hypocaust and the Chinese k’ang, both subfloor heating systems, were used 2,000 years ago. An Afghan version, called the tawakhaneh, may have been around for as long as 4,000 years.

Marcus built his k’ang to wring every last Btu from his firewood. The stove does this by burning wood at high temperatures and by storing the tremendous heat that it generates. Marcus’s k’ang won’t need to burn a constant fire, either. He believes that an hour-long burn twice a day will be enough to heat the addition and contribute substantially to heating his entire house. There are 225,000 Btus in 30 lb. of firewood. If the k’ang is 90% efficient, it will generate and hold 202,500 Btus morning and night.

I had seen Marcus’s work, and was intrigued by some other masonry stoves he’d built. I was especially impressed with the massive, under-the-floor stove in the conference center of the building where I worked. The heat it produced was very comfortable. So last spring, when Marcus mentioned that he had started to build his under-the-floor stove, I asked if I could watch the construction and write about the process.

As soon as the ground thawed in the spring, Marcus began digging. At the center of the existing exterior wall, he excavated to a depth of 6 ft. below grade. He then laid in a concrete-block stairway, which began at the southeast corner of the house and dropped five steps to a 3-ft. square landing. All along the stairwell’s interior wall, Marcus reinforced the existing foundation with concrete. The stairway turned left at the landing and dropped two more steps to meet the existing 3-ft. wide basement corridor. Marcus strengthened his foundation at this entranceway using bond-beam construction with each course of blocks all the way to the floor. He used blocks that had knockout webs so that removing the knockouts in each block created a horizontal channel through the entire course. Marcus then filled this channel with concrete. Next, he tore out the rickety old wooden stairway leading to the living room upstairs.

The concrete stairwell divided the new addition in half, and also framed the west wall of the k’ang stove. Three courses above the stair’s landing, Marcus placed the k’ang’s 3.1-cu. ft. firebox. He and his wife would be able to stoke the stove while sitting on the stairs. 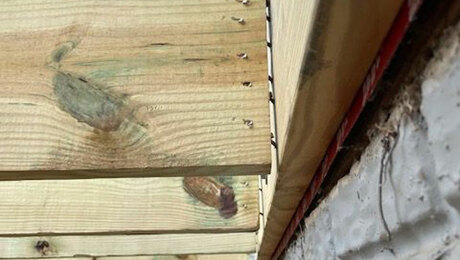 Should This Deck Framing Make Me Nervous?

Gaps between the joists and the ledger have a homeowner concerned.