Time-saving techniques from the tracts.

Synopsis: Production builders look for the fastest, most efficient means of getting the job done. Here, Larry Haun shares a method for installing door jambs and hanging doors quickly. One trick is to use nails instead of shims on trimmer studs, but there’s plenty more.

I went to work as a carpenter in 1949. A craftsman in white overalls taught me the trade I practice to this day, from foundation to finish work. In those early days, my crew and I would build two or three houses a year.

But post World War II America was booming. Good jobs with good wages were available to anyone who wanted to work. Veterans could take advantage of home loans under the G. I. Bill. Literally hundreds of thousands of people needed, wanted and could afford to own a new home. Instead of building one home at a time, carpenters needed to build 5,000 at a time, and as a result, we had to come up with more efficient construction methods.

And that’s just what we did. It wasn’t long before we were constructing a house in days instead of months. But even though these new methods were considerably faster than the old tried-and-true procedures, they proved to be just as effective.

Everything seemed to change. Hammers gave way to nail guns. Power tools became commonplace. And most important, housing production became an assembly-line process. Those who framed the walls no longer cut and stacked the roof. Those who set the jambs no longer hung the doors.

The new assembly-line methods generated an incredible increase in production. In 1950, we were expected to hang a door an hour and eight doors a day. But in 1953, a friend of mine, a door-hanging specialist, was hanging 80 to 120 doors a day with assistance from a helper. Not only was he fast, he was accurate; the quality of his work far exceeded that of carpenters who hung only a few doors a year.

Traditional methods of setting door jambs are quite effective, yet they require considerable measuring, sawing, nailing and shimming. A faster, but equally effective way to build door jambs is based on a technique called clipping. Clipping eliminates the need for shims—nails alone hold everything securely in place. Clipping even eliminates the need for door cripples, except for jambs in which pre-hung doors are being used.

Because you already know the stud length, there is no need to go from opening to opening, measuring each one. The length of each door header is equal to the width of the door plus 5 in. To set a door jamb using the clipping method, begin by pre-cutting all the necessary trimmers. Cut the trimmers about 1/16 in. oversize to ensure a snug fit. The next step is to put a trimmer under each end of every header. Halfway down its length, secure each trimmer to its king stud with a 16d nail.

For more photos and details on door jamb setting and door hanging, click the View PDF button below. 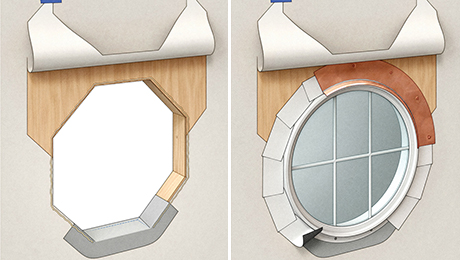 Flashing a Round Window

The process is the same as for a rectangular window, but special attention should be paid to the head flashing.