Should you buy a kit or build your own?

Synopsis: Pocket doors, which slide into a wall cavity rather than swinging on hinges, have a reputation for vexing installation and difficult repairs. The author surveys builders on ways to avoid these problems and describes how to build a frame instead of buying one. He includes a list of suppliers. A sidebar discusses pocket doors in old houses.

When I asked one architect about pocket doors — doors that slide into a wall, rather than swing on hinges — he said he avoided them like the plague. Another told me he used them only as a last resort. One builder simply said, “They’re stupid. Don’t use them.” Modern-day pocket doors have a reputation for creating flimsy walls on either side of the pocket, for using lightweight hardware that’s easily misaligned and rollers that jump off the track, and for needing repairs that are impossible without tearing open the wall.

But blaming pocket doors for these problems is like blaming a circular saw for not cutting straight. Having installed a few pocket doors myself, and having recently spoken to builders all over the country about pocket doors, I’ve learned that, properly installed, some commercially available frame kits work just fine. I also discovered a great system for building your own pocket-door frames.

To swing 180°, a standard 2-ft. 8-in. door needs over 10 sq. ft. of clear floor space. A typical house — three bedrooms, two baths — might have nine or ten swinging doors whose collective door swings lay claim to 100 sq. ft. Half of that figure represents the space directly in front of the door, which has to remain clear anyway. But the other half is usable space — 50 sq. ft. of it — that could be reclaimed through the use of pocket doors.

Pocket doors are commonly used for two specific reasons: either because the space and traffic pattern demand it, such as in a half-bath off a hallway where it would be awkward to have a swinging door; or because you want the option of occasionally closing off a room without having to sacrifice space in return. An example of the latter would be pocket doors used between kitchens and dining rooms. Such doors are going to be in the pocket 90% of the time, but when you want to hide the dirty dishes after Thanksgiving dinner, you can pull them shut.

One advantage of pocket doors is that the two sides can be painted different colors, or even milled differently, to match the rooms they face. A swinging door, on the other hand, shows both sides to the room it swings into — one side when the door is open, the other side when it’s closed.

Structurally, pocket doors have the disadvantage of requiring a header that’s twice as long as that of a swinging door. The problem is magnified with converging pocket doors — a pair of pocket doors that slide toward each other. For example, if you have a 6-ft. opening between two rooms and you’re debating double swinging doors versus converging pocket doors, the latter will require a header that’s nearly 13 ft. long. Another disadvantage of pocket doors is that if they’re used in a 2×4 wall, you don’t have room for an electrical outlet or switch in the area of the pocket. None of these problems is insurmountable, though, and if you don’t have room to swing a door, sliding it into a wall may be your best option. 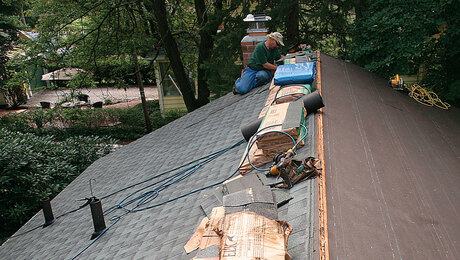 Can I Reroof My Own House with Asphalt Shingles?

Roofing can be dirty tough work but it's something most people can do themselves.