A brick chimney in place of metal

I want to replace the galvanized flue on my furnace with a brick chimney. The flue now sits over the garage floor. It is about 27 ft. high and is exposed for about 15 ft. above the garage roof. All but the last 4 ft. is next to the wall of the house. Should I build an entire brick chimney, can I brick only the section above the garage roof, or should I use ‘‘thin brick’’ glued onto a wooden chimney structure?

Richard T. Kreh Sr., an author and masonry consultant in Frederick, Maryland, replies: A one-flue brick chimney is the best solution to your problem. I would not use “thin brick” on a wood backing. I also would not brick only the exposed section. Both of those options are still a lot of work, and neither will give you the quality and longevity of a brick chimney.

Your first step is installing a concrete footing to handle the concentrated weight of the chimney. Use a concrete-cutting blade on a circular saw to cut out the concrete slab where the footing is going. It’s best to check local building codes to make sure the dimensions of the footing are in compliance. However, I recommend pouring a footing twice as wide as the chimney and at least 12 in. deep. Rebar or steel rod can reinforce the footing. For the chimney itself, I’d select a good hard brick from your building supplier, and for the mortar, use type-S masonry cement mixed with washed building sand. Never use old or used brick for a chimney.

Each layer of a single-flue chimney is a square of bricks with 2-1/2 bricks on a side, open in the middle and overlapping the layer below. After the first three courses of bricks are laid, build a clean-out hole and install a cast-iron clean-out door. Steer clear of pressed-steel doors, which tend to rust. This door is for removing soot after it has built up in the chimney, and it should be kept tightly shut at all other times so that it won’t interfere with the draft in the chimney.

The first section of the flue lining should be set onto a brick header at least 12 in. below the top point where the terra-cotta thimble for the furnace will be installed. Select a terra-cotta flue lining that fits your chimney requirements. The correct rectangular size for a furnace is usually 9 in. by 9 in. Nothing is gained by installing a flue lining larger than needed. A larger flue only creates too much draft and sucks a lot of warm air out of the house and up the chimney.

Flue sections are a standard 2-ft. height, and you can buy a special flue with the hole already cut for the thimble, which saves a lot of work. The thimble, also known as a flue ring, is usually installed in the chimney about 16 in. above the top of the furnace. As the chimney is built, a 1-in. airspace should be left around the flue to allow for expansion and contraction. Any mortar that drops down the chimney should be removed through the clean-out door each day.

If the garage wall is masonry, attach wall ties using case-hardened nails into the existing wall to stabilize the chimney. If the wall is wood frame, leave a 1-in. airspace between the chimney and the framing.

If the chimney passes through a gable overhang, hold the framing 2 in. away from the bricks, and flash the chimney into the roof. Also, a one-flue chimney should be tied to the rakes of the gable with a heavy metal strap that passes around the chimney and is bolted into the roof framing. The strap keeps the chimney from falling over in high winds. 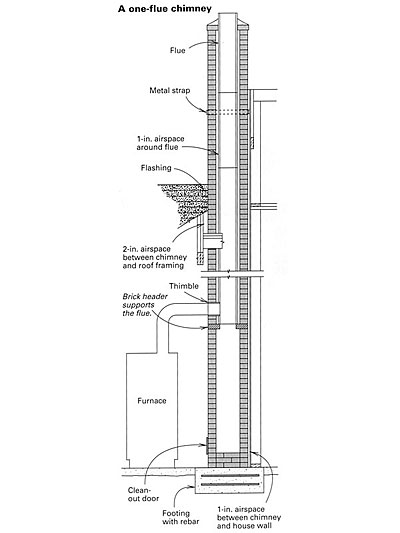 View All
View All Concrete and Masonry Articles