Island Home with a Twist

A challenging site of sloping rock becomes the inspiration for this house on San Juan Island.

Synopsis: An architect explains the unique architectural and engineering details used to build a dramatic, light-filled contemporary home on a difficult building site on San Juan Island, including steel pipes pinned to rock that prevent the roof from blowing away in a gale and a table top for a breakfast nook that slides out of the way.

The Martins’ site was stunning. It faced west from the top of the rock bluff overlooking the sky-blue Straits of Juan de Fuca with the crisp Olympic Mountains beyond. At the foot of the bluff, orca whales chased salmon, and eagles hunted overhead.

I could have built the house at the bluff’s edge, which would have yielded unrestricted views. But that position also would have been unprotected from the gales that buffet the island. More important, any house built atop the bluff would have been a harsh slap in the face for anyone looking up from the water.

After much discussion, John and Janice Martin agreed that the more sensitive, less conspicuous choice would be to build behind the bluff, nestled into the forest edge. Here, the land comprised mossy rock knolls and jumbled madrona groves. But the only spot available for building was steeply sloped, and to make matters worse, it sloped away from both the views and the sun.

The design grows out of the rocks

The rock was immutable; that was a given. So I developed the design concept for the house from the rock itself. The rock outcroppings were jutting, angular and inclined; I designed the shell of the house to mimic these forms. The plan of intersecting rectangles relates to the views, the light and the rock outcrops. The compound angle roof planes thrust upward in the same manner as the jagged rock formations.

The resulting foundation drops 18 ft. from one end to the other in the north/south axis. To keep the living room as close to grade as possible, the uppermost corner is slab on grade. The rest of the floors were conventionally framed.

The rock itself provided the footings for the foundation. Pete Kilpatrick and his Ravenhill Construction crew pinned the foundation to the rock with 2-ft. lengths of #8 rebar drilled into the rock every 2 ft. The form boards were scribed to the natural contours of the rock.

The steeply sloping, natural rock outcropping became the basement floor. We scraped off (and stored for later landscaping purposes) the moss that had clung here. The rock then was pressure-washed and later sealed. At the lowest end of the basement, we poured a 10-ft. by 10-ft. level slab for mechanical equipment and storage.

Holding down a roof of angles

The compound-angle shed roofs meant that no two points on the top plate were the same height and no two studs were the same length. Compared with most roofs, the work and the measuring were formidable. No two of the I-joist rafters were the same length nor could they be cut at the same angle. The construction foreman, Gordon Elliot, spent as much time scratching his head as installing joists. But the resulting dramatic roof planes are largely why the house blends so naturally into its site. 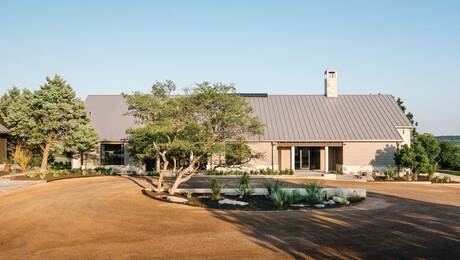 A modern update of a house designed by architect Frank Welch puts an emphasis on the client's love for cooking and entertaining.