Learn how to replace a circular-saw cord and trigger switch

My first circular saw was a Skil HD77 worm drive. One of the first cuts I made with it was through its own cord. As the motor wound down, the weight of the saw caused me to let it drop to my side, where the cord was hanging in the wrong place. In an instant, the cord was in two pieces, and I was looking at lost time and money spent for repairs. According to Tom Peck, who specializes in power-tool repair and maintenance at Tibby’s Electric Motor Service in Bethel, Conn., cut cords are fairly common, especially with worm-drive saws. The repair procedure is the same for just about any type of portable power tool.

Peck says that if the trigger switch hasn’t been replaced recently, he recommends doing that at the same time you’re replacing the cord. Switches generally are not interchangeable among manufacturers, and cords can be specific to the model and year of manufacture. That’s why it’s important to double-check that the saw matches the replacement parts before starting the repair.

Peck also makes sure he has the right tools on hand. Even though the Torx-head screws on the HD77 can be turned with different-size straight screwdrivers, Peck relies instead on a multibit screwdriver that contains a good selection of interchangeable bits.

Step By Step: Take off the handle housing, then remove the cord and switch 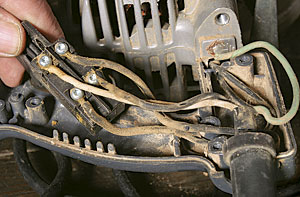 I like simple, well-designed tools. I even appreciate the engineering that goes into a multibit screwdriver. When I have to buy one, I look for a design that has a solid feel, good balance, and a nofrills mechanism for tip changes. I shy away from multibit screwdrivers that look more like robotic transformers than tools. For years, I carried one that had a choice of four drivers (two sizes for both slotted and Phillips heads). I relied on an old Altoids tin to store extra bits. However, plenty of new multibit screwdriver designs are worth a second look. The Kobalt looks and feels like a regular screwdriver, and it has a magnetic tip with interchangeable bits that are stored in a hollow handle. At $5.98 (www.lowes.com), it won’t break the bank, either.

Step By Step: Attach the new cord to the motor, then to the new switch 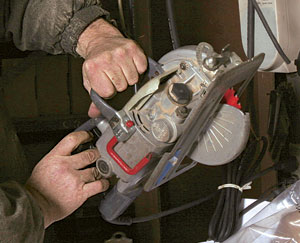 Photos by John Ross, except where noted