The Taming of the Tarp

Great moments in building history: When it was all over, it lay in wait to wreak havoc on another innocent homeowner

Springtime in Texas can be wet, windy, and violent. During the first month of our building project, rain threatened every day. We were building a secondstory room and bath above the garage and were roofless long enough to make us, as first-time renovators, very nervous. The Weather Channel was must-see TV.

To give us peace of mind, every evening our patient framing crew covered the hole in the roof, fighting a tireless monster, a 40-ft. by 60-ft. blue tarp, to do it. At quitting time each afternoon, restraints (bundles of shingles and 2x4s) were removed, and the tarp, springing to life, snapping, and growling, was herded to his workstation. The first thing every morning, he was unnailed, tranquilized, and caged back out of the way on the roof. Even though the framing crew packed guns and knives, the blue devil fought like a wildcat.

One gusty afternoon, I stood in the backyard and watched as the crew began its daily skirmish with the tarp. The second story was still a pile of sticks in our neighbors’ yard, so a lot of excess tarp was draped on the building, with several feet lying on the ground around the garage.

The blue tarp was really alive that day. Air flowed uphill from the lake, funneling into the garage and inflating the tarp. It rose and fell like a dragon’s chest, expanding 10 ft. in the air with each drawn breath. The framers struggled. They were hidden from sight up on the roof behind the swelling tarp, but muffled shouts and an occasional pounding pinpointed their locations.

My husband and I prided ourselves on being helpful, so I thought I’d give the guys a hand by holding down a corner of the tarp so that at least one part wouldn’t become airborne. The framers couldn’t see me helping down below, but I felt smug in the knowledge that I was contributing. I held on to the blowing tarp, and the framers yelled to each other. Boredom set in quickly. Then I decided that I didn’t have to hold the tarp. I could just stand on it, easily holding down the corner.

The rogue tarp must have felt it was time to teach me a lesson. It inhaled mightily, yanked its slippery self from under me, and left me upside down 3 ft. off the ground, all in the blink of an eye. The back of my head hit a sheet of plywood in the yard. The framers fought on, unaware of the ambush. The one mercy the billowing tarp bestowed was hiding my retreat into the house.

After a few minutes of waiting for a migraine that never arrived, I ventured back out, where the situation was unchanged. The wind whipped and the crew shouted. The tarp screamed and snapped in rage. From my now-distant vantage point and with slightly blurred vision, I could see the beast for what it really was: a “morphling,” one moment a blue octopus with giant head thrown back and tentacles outstretched, and the next a 60-ft. hungry stingray hovering over the house. Maybe that blow to my head was harder than I thought.

As the tarp roared in its wind-whipped fury, I noticed for the first time that whatever the framers did, they never stood on the tarp. They stood near it or under it. Aaaah. A subtle nuance that had escaped me. Their actions spoke eloquently of experience. The only lasting souvenir of my effort was a 4-in. bruise on my forearm. At the time, I didn’t even realize my arm hit anything. There was also a little soreness in my neck and shoulders, but I had a lucky escape.

Several weeks and a new roof later, we folded up the tarp. The contractor ignored the framers’ suggestion of a bonfire. With its hide weather-beaten and tattooed with duct-tape patches, the tarp was so benign. Three of us sat on it to squeeze the last drop of life out of it. Then we trussed it with an old water-ski rope. Loaded in the back of the contractor’s truck, it crouched like a monster’s egg, ready to hatch and wreak havoc on another innocent homeowner. 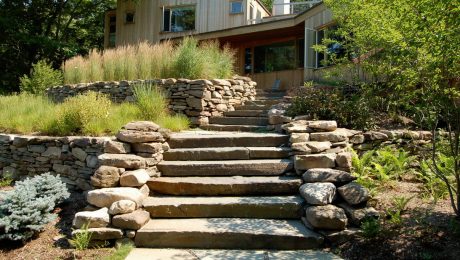 Designing for regional context is an important topic these days. Get ideas for your outdoor space by learning what the pros consider when working with clients.