Jigs for Jambs (and Other Door-Hanging Devices)

There seem to be as many ways to hang a door as there are carpenters to hang them, so after many years of running a trim crew, I came up with a few of my own ways to make the work easier and the results better.

When it comes to hanging doors, I believe that the jamb legs should bear fully on the subfloor. Nails alone (especially the light-gauge nails used these days) won’t support the weight of the jamb and door over time. Trimming the jamb legs to closer tolerances requires accurate measuring and cutting techniques. Instead of marking a level line and then measuring each side to determine the length of the jamb legs, I came up with a jig that holds my level and almost immediately tells me the difference in length between the two legs. Of course, this jig works well if I’m installing doors on a finished floor, too.

When the time comes to cut the jambs, I adjust my technique depending on the project. If I’m removing the doors from the jambs before installation, I tack a spreader across the legs to maintain the opening, and I cut with a chopsaw paired with an outfeed stand to support the jamb. More often, I keep the doors and jambs intact, mark the jamb lengths, and cut them with a circular saw and a crosscut jig.

Here’s a look at my jamb-measuring and cutting jigs and some other ideas for fast, accurate, sturdy door-hanging.

I make a jig from 5/4×6 stock that I rip to about 4 5/8 in. I nail a crossbar 48 in. from the bottom, which is a comfortable height. Then I take apart a broken folding rule, paint over the numbers to avoid confusing myself, and tack a 6-in. length to each side of the stick so that the rule’s center (marked with a zero) is equal to the top of a level sitting on the crossbar. Having rules on both sides lets me use the jig for both left- and right-hand doors.

I begin measuring with a reference jamb length.let’s say 80 5/8 in. (80 in. for the door, 1/2 in. for the clearance to the floor, and 1/8 in. for the gap at the head). I register the jig against the hinge side, level across, and mark the strike side (photo below left). Then I fit the jig onto the strike side, where I can see any difference in height between the hinge and the strike side of the jamb (photo below right). I write the measurement in 16ths as shown on the rule—minus 2, for instance—and subtract it from the reference length. The strike-side length becomes 80 1/2 in. After the legs are cut, I know the jamb head will be square when the door is installed.

Gauge the gap, gauge the cut

On most jobs, I send my apprentice Hearty around with a jamb jig and graduated shims to check thresholds for level. (A large part of an apprentice’s life should involve crawling around on the floor.) If the floor slopes, the jamb needs to be cut slightly off-square to match. Hearty shoves a graduated shim (photo below left) into any gaps beneath the jig and measures the gap created by the angle. He then marks the measurement on the drywall next to the rough opening. The carpenter responsible for cutting the jambs adds or subtracts that amount from the target length.

Guesstimate no more. To determine the width of a small gap quickly, I grab some shims, then graduate their tapers in 1/16-in. increments. I use a set of dial calipers; all I have to do is lock the jaws at the desired thickness, shove in the shim until it is snug, and mark it. You can buy accurate calipers for less than $20. The best thing is that as long as the marks are measured with the same calipers, the marks are identical from one shim to the next, regardless of the length or the taper of the shim. An apprentice can use one to measure, a carpenter can use a different one to cut, and the jamb will bear equally on the floor.

By inserting his own graduated shim to the mark indicated for that door between the jamb edge and the plywood crosscut jig’s stop, the carpenter reproduces the angle of the threshold, and his cut matches the floor.

Trick of the Trade: Slick techniques for fastening doors 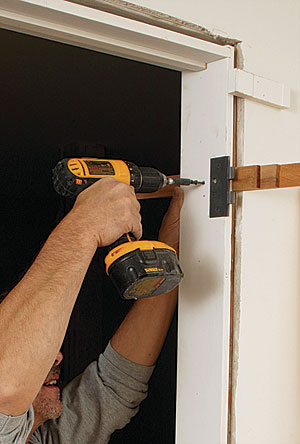 For stronger door assemblies, I prefer 3-in. screws instead of nails. (Nails are great to locate the door, but screws hold better.) I remove the side stop and drive a screw through the shims. When reapplied, the stops hide the screw heads. Alternatively, I drive a long screw into the hinge, as long as I can match that screw to the existing screw heads. 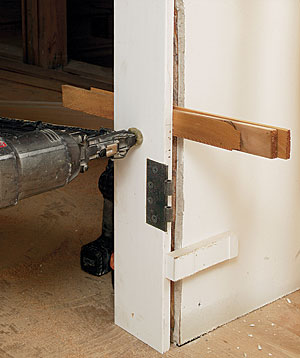 When shimming the jamb plumb, I find it easier to adjust the shims if I nail above and below the shims. Once the jamb is where I want it, I drive a screw through the shim. Small blocks tacked to the drywall register the jamb’s hinge side to the drywall’s face.

Photos by: Charles Bickford, except where noted 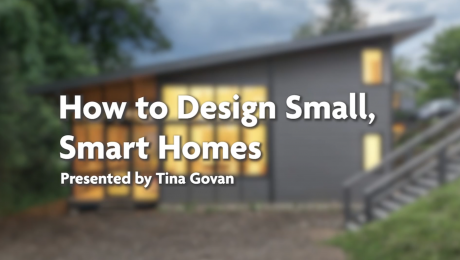 How to Design Small, Smart Homes