Could There Be a Boom of Backyard In-law Cottages? - Fine Homebuilding
Main Menu
Subscribe

Could There Be a Boom of Backyard In-law Cottages?

In the nearly three years I spent researching and writing a book about accessory dwelling units-In-laws, Outlaws, and Granny Flats: Your guide to turning one house into two homes-I thought I had seen every variation of designing and building ADUs out there. But as I was putting the book to bed, I came upon a developer in Berkeley, Kevin Casey, with a new twist. Namely, Casey’s start-up offers homeowners a turn-key ADU package that includes private financing, design, permit approval and construction. What’s more, he seems to be making a go of it, with a first backyard cottage garnering a lot of praise, and six more units in the pipeline. Now he’s looking for builders in other regions to partner with.

Whether Casey’s ADU model will thrive in other states depends on its surmounting some formidable barriers-particularly, zoning codes. But it should do well in Left Coast cities and suburbs from San Diego to Seattle, which are by and large receptive to second units. And it’s hard to argue with his numbers. To keep this blog brief, I will encapsulate four Q&A’s below and let the interview do the rest of the talking.

Q: Why the interest in second units these days?

A: Bunch of factors. Households are much more diverse, with many more multi-generational set-ups. We’re no longer a nation of Dad, Mom and 2.3 kids. The Baby Boomers need more flexible housing as they care for aging parents or look ahead to a time when they’ll need care. And despite a population increase of 3.4 million people between 2005 and 2008, we’ve lost 1.2 million households. Clearly, a lot of families are doubling up.

Q: You’re a recent graduate of UC’s Haas School of Business. How did you come to create a start-up that focuses on a building industry niche that’s usually ignored?

A: Well, I took a lot of kidding about it-“What, you need an MBA to build backyard sheds?”-that sort of thing. But the concept grew out of some fairly rigorous analytical research in UC’s engineering, planning and business grad schools. We looked at the ten fastest-growing cities in California, for example, and saw that in the Bay Area, 85% of families can’t afford a median-priced home. So there was a tremendous pent-up demand, under-utilized homes on good-sized lots…and then California passed sweeping legislation in 2003 [Assembly Bill 1866] which gave homeowners the right to build second units. So at that point we said, ‘Wow, here’s a chance to build housing that’s affordable, sustainable, and repeatable in cities across the state.’ Now we’re seeing momentum in other states, too.

Q: Lending homeowners the money to create a second unit on their property is a striking departure from business as usual. You forego banks altogether?

So if an investor gets, say, 8% return on his investment, that’s very respectable and it’s a safe investment because it’s secured by a valuable home in a nice neighborhood. It’s also a good deal for a homeowner who, quite often, is an older person with a lot of equity but who might have a hard time getting a loan from a bank to build an ADU, especially if they’re retired and have a relatively low, fixed income. We can configure the financing in many ways, but typically a profit-share goes to the homeowner right from the get-go.

But this isn’t just about the money. Many older homeowners rent the unit to family or friends and they like to have the company around. To be sure, our investors are drawn by the prospect of a healthy ROI, but many of them buy into the “impact investment” philosophy and so feel good about the positive social aspects of our in-law units: more affordable housing, urban infill and LEEDS certified buildings.

If you’re interested in second units, please check out my recent book, Outlaws and Granny Flats: Your Guide to Turning One House into Two Homes. The Library Journal named it one of the 10 Best Design Books for 2011. You can also preview In-laws, Outlaws‘ lush professional photos at www.cozydigz.com

If you will be renovating your home (or perhaps creating an in-law suite), there’s no better companion than Renovation 4th Edition, (November, 2012). Its 614 pages, 1,000 photos and 250 detailed illustrations cover home renovation from start to finish and  contain lifetimes of practical, field-tested techniques that professional builders shared with me over a 40-year period.

If you liked this piece, you’ll love the Green Architects’ Lounge podcast at Green Building Advisor.

The stick-built cottage, under construction. The company also offers homeowners the option of a pre-fabbed ADU delivered to the site, to minimize the impact on the neighborhood.

The 450 sq.ft in-law cottage features a loft bedroom, a galley kitchen with high-end compact appliances, a living-dining area and a full bath. 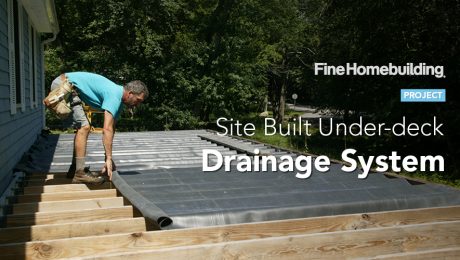 Watch Mike Guertin demonstrate how to keep the space under a deck dry with materials that cost less than $1/sq. ft. in this FHB webinar.