I have some questions that maybe you can help me understand. They mainly have to do with my own work ethic and a few observations from building houses for more than 60 years. Maybe they will be food for thought for some of you.

A tale of two builders

Let me start with a story. Back in the early 1980s, we were building a spec house in an exclusive canyon in the Los Angeles area. It happened that on the lot next door, a young builder named Tom was framing another spec house. We started working on the house frame on about the same day. Both he and I were building with one helper. By the time Tom had his house frame completed, the house we were working on was shingled, the walls were covered with stucco, and all the mechanical work (plumbing, electrical, heating) was awaiting inspection so that we could drywall inside. The final result of all this was that Tom ran out of money from the construction loan before completing his project. He had to turn the incomplete building back to the bank while we completed ours, sold it, and made a profit.

So why this disparity between these two similar houses? The main difference between us was that Tom and his helper were building furniture and we were production-framing a house. Every 2x block in his house was cut to perfection, every joint was clean and tight, and everything was framed to within 1/16-in. tolerance. Both houses were properly braced and built square, straight, and plumb; they were structurally sound. Both frames were then covered with drywall on the inside and stucco on the outside. Both houses should last for a long, long time. Is not the main difference that one cost much less to build?

So here is one of my questions: How do we build to ensure that customers get a quality home at the most reasonable cost and that we leave behind work we can be proud of?

I don’t want to take on some of the larger ethical issues we carpenters and builders face: creating construction waste, using certified wood, working with sustainable materials, or working with endangered wood species. And I don’t want to write about obvious ethical shortcomings. Cheating is cheating! Using inferior materials or doing sloppy work is not OK in any of our books. During the 1950s when I was framing on the tracts, every 1200-sq.-ft. house had a brick fireplace. To make his work easier and to make more money, one bricklayer I knew would cheat by cutting off the 20-ft.-long vertical steel rebar that bricks and flues were laid around. In place of the long rods tied into the foundation, he used a 4-ft. piece of rebar in each corner of the fireplace and pulled the bars up as he laid brick. If a building inspector happened on the job, he or she could see that the fireplace had the code-required steel bars in it.

A further question: Do I, as a carpenter, have any obligation to learn about and use new tools or methods of building if this will reduce the cost to a homeowner?

I go back to the revolution in methods, tools, and materials that took place in the early 1950s in Los Angeles as we changed from building one house at a time to building 500 in a row. We needed thousands of houses after the Great Depression and WWII, which demanded that we change our way of building. What we encountered in those days was substantial resistance from those who had been building differently for many generations. I have had people tell me out on the job site, “This is the way my father taught me to build, and it worked well for him. So why should I change?” I am not saying the old ways were wrong—just slow and outdated.

The methods we developed in the 1950s meant that we could build houses much faster without reducing the quality and without working harder. We called it “production-framing.” What was fascinating to me is that other carpenters across the country took forever to pick up on these methods. Whether we are building a tract house or a custom mansion, production-framing allows us to do it faster, costing everyone less money. This is the main reason I wrote the book The Very Efficient Carpenter, which was published in 1990. This book and accompanying videos are on production-framing.

Production-framing is actually quite simple. It is like working on an auto assembly line. On-the-line workers don’t install one tire on an auto, then the rear-view mirror, and then go back and install another tire. With production carpentry, everything is finished as complete as it can be before we move on to the next construction project. Pretty simple.

Take plating for walls, for example. When I started framing, we would snap a chalkline for a wall position on the floor, lay it out, build it, and then do the same for the next wall. This way works, but it is time-consuming, and someone has to pay the extra cost. We learned to snap chalklines for all wall lines, lay down all plates, do all detailing of studs and headers, and then start building walls. Am I right on this?

There are many other examples of production-framing: learning to cut square without using a square, marking foundation-bolt drill holes on a sill by using a simple tool, using a stud-layout stick (which saves time and materials), cutting multiples rather than one piece of wood at a time, not working to 1/16-in. or even 1/4-in. tolerances.

What one person thinks is sloppy, another sees as “just right”

None of these examples (and there are many more) cause us to work harder or faster. None of them damage in any way the quality of the building. All of them save time and therefore money. So the question is: What is our responsibility as carpenters, to ourselves and the people we build for, to upgrade our knowledge, methods, and tools to build quality homes at prices people can afford?

My experience is that most of us, including carpenters, resist change. I know I do. We have a tendency to follow conventional wisdom and to build like it has always been done. It is not always easy to be free from fixed mind. What is important, in my view, is that our unwillingness to change doesn’t mean that others have to pay extra for how we build. Does this make sense?

I end by saying that I am grateful for the workshops put on by people like Mike Guertin, Rick Arnold, Gary Katz, Fine Homebuilding magazine, and others. They help to bring us up to speed. 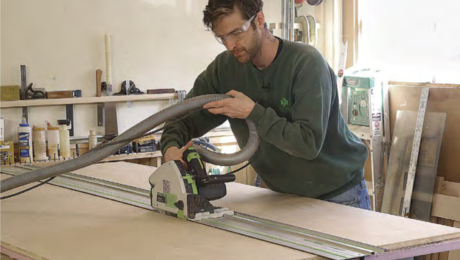 Making the Best of a Tough Situation

A Special Message to the Fine Homebuilding Community