In a career spanning more than three decades, he’s captured houses at their best—and sometimes worst.

I grew up in Nebraska, and I am more or less self-taught. I ended up learning by shooting the targets that I had, which were industrial sites, rural architecture like grain elevators, bridges—things that didn’t move and that were suitable to the long exposures and the methodical working style dictated by a 4×5 view camera.

In the late ‘70s, I moved to Maine and wanted to earn my living in photography. My portfolio was mostly of rural farm buildings, but I decided to call on architects to shoot their work. I had no idea that there was such a thing as an architectural photographer. I started getting work immediately. It ended up being a mutually beneficial relationship. I was learning what they needed and learning how to shoot architecture professionally, and they were getting better and better photographs of their work.

How do you capture the essence of a house in an image?

It’s an exploration of what the light is doing on the house. My biggest job is to get in sync with the sun and to be in the right place at the right time. If I miss that, I have to work much harder to go back and artificially re-create what I should have gotten when the sun was lighting it for me.

Do you have a favorite house that you’ve photographed?

I don’t know that I have one favorite, but some have been memorable. The Greene & Greene house in Carmel-by-the-Sea, Calif.—the James residence—just left me speechless. I don’t know how those guys built that house on those rocky cliffs. It’s a masterpiece.

On my side of the country, amid the traditional shingle-style forms of architecture, I stumbled across a little Scandinavian sod-roofed curiosity on the island of North Haven, Maine. It was a small house with built-in Scandinavian beds and colorful carvings on the columns. That house was so atypical for Maine—and for anywhere in the United States, actually—because it had all these Scandinavian touches.

What have you not shot but want to?

I’ve had a growing interest in modern architecture. Since I built my career largely in the Northeast, the predominant styles are traditional. There are fewer modern, glass, and steel structures here. I’m also interested in shooting desert architecture.

What makes a house interesting?

A sense of proportion and imagination is essential. There also needs to be something about the siting. The landscape and the architecture combined really make such a powerful statement. If you can bring the essence of those two things together, then you’ve strengthened your photograph, and you’ve strengthened your statement. If it’s got a great environment to look at—if it’s near the sea, for instance—that’s a great plus.

What prompted you to take on the work that became your book Ruin?

I’ve always been interested in abandoned architecture. It goes back to when I was learning photography back in Omaha. I needed to have something where I wasn’t going to be under time constraints, so I spent time with these abandoned buildings. Then I just kept on doing it. Eventually, it spanned over 30 years of shooting, and I realized that I had an interesting body of work. Philosophically, I like what that book represents. To me, it is a study of our mortality, and it’s a look at us as human beings.

What advice do you have for novices shooting their own work?

The most important thing you can do is study the house. Ask yourself: What is the subject of this photograph? What am I really seeing? Learn how to edit carefully with your eye. I think a common mistake with beginners—especially with interior photography—is that you need a wide lens so that you can get everything in. Shoot with the longest focal-length lens you can to avoid trying to get everything in. Your job is to be selective about what you shoot. Focus on getting as much stuff out of the surrounding area for the picture. Shooting with the longest focal length you can will force you to edit at the camera.

The other thing is to develop a sense of light. Be attuned to what the natural light is doing because that is a tremendous asset in any photograph.

The most important thing is learning how to see. I’ve always said that good architectural photography will look simple. It’s a skill that needs to be learned over many years and a lot of exposures. 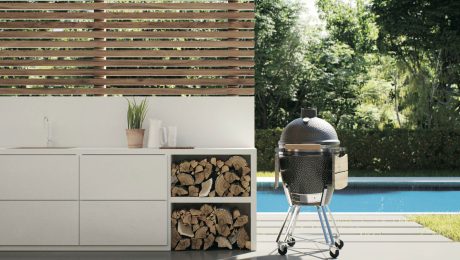 The Outdoor Collection from Caesarstone is naturally nonporous with a resin that protects against color fading.