Ball, gate, and globe valves all open and close supply lines. But they work differently and sometimes the code is specific about which you must use.

Residential plumbing has become more efficient, more convenient, and perhaps more complicated. Take the myriad variations in PEX plumbing systems, for example. A home-run set up will save water and energy, delivering hot water quickly to all taps, but it requires a lot more pipe than a traditional trunk and branch system. Water heaters have become more efficient too, and more high-tech, but now also require more maintenance. Getting your head wrapped around plumbing system design is important, as is choosing the right plumbing fixtures and appliances. Knowing the specifics of even seemingly mundane plumbing parts, like a shut off valve may not be as simple as it seems.

Shutoff valves allow plumbing work to be done in a specific room or even at an individual appliance, such as a dishwasher, without having to shut off the water for the entire house. Ball valves are the most common type nowadays, but houses of any age can contain gate valves and globe valves, too. Whether you’re installing new valves, replacing old valves, or just wanting to know more about your house’s plumbing, it’s important to know the differences between ball, gate, and globe valves. 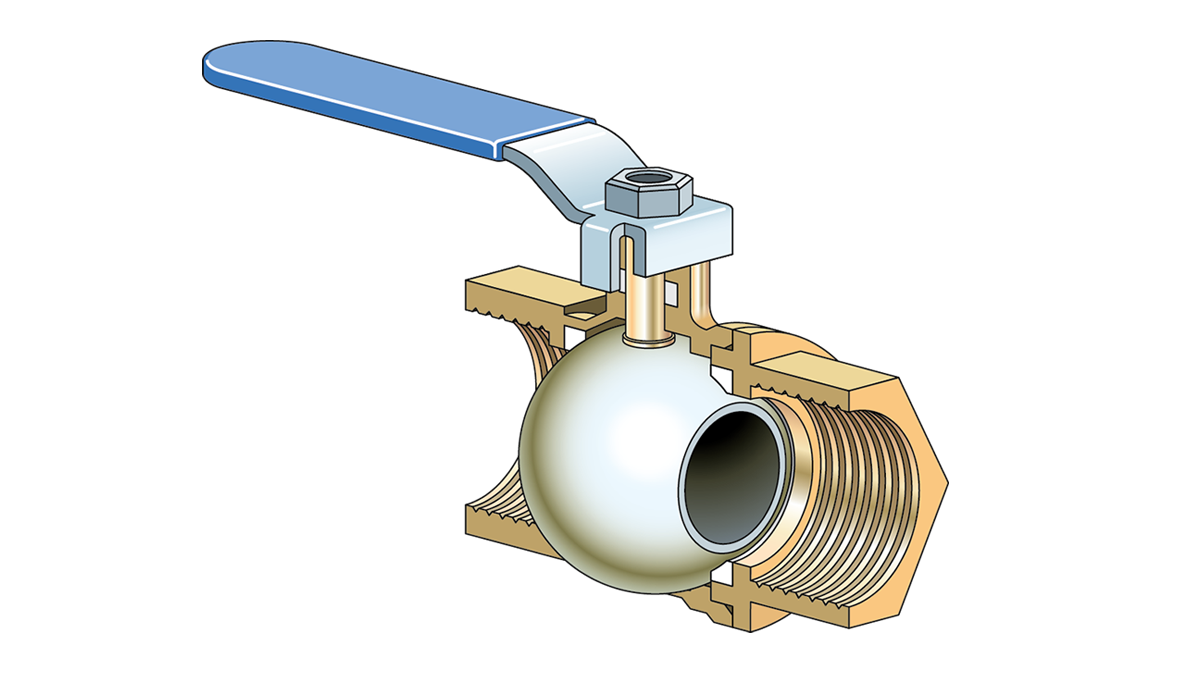 Ball valves are valued for their longevity and their ability to work perfectly after years of disuse. Inside a ball valve, a sphere usually made of brass, chrome-plated brass, or stainless steel has been drilled through from one end to the other. Attached to the top of the sphere is a lever whose range of movement is just a quarter turn. Move the lever parallel to the pipe, and the opening in the sphere aligns with the water flow. Move it perpendicular to the pipe, and a solid section of the sphere blocks the flow. You can control the flow by moving the lever between 0° and 90°. A partially open ball valve, however, can leave the silicone or PTFE seats on either end of the ball susceptible to deformity from uneven pressure.

One advantage to quarter-turn valves such as ball valves is that they can be shut off quickly. The disadvantage is that this makes water hammer more likely. For that reason, it’s best to turn the lever on a ball valve slowly. The levers themselves give ball valves two advantages over wheel-operated valves: First, it’s much easier for persons of all abilities to move a lever than to turn a wheel. Second, it’s possible at a glance to tell if a ball valve is open. Ball valves have one potential disadvantage over wheel-operated valves: Because shutting off the water flow means turning the lever perpendicular to the pipe, a ball valve may not work in certain tight locations. 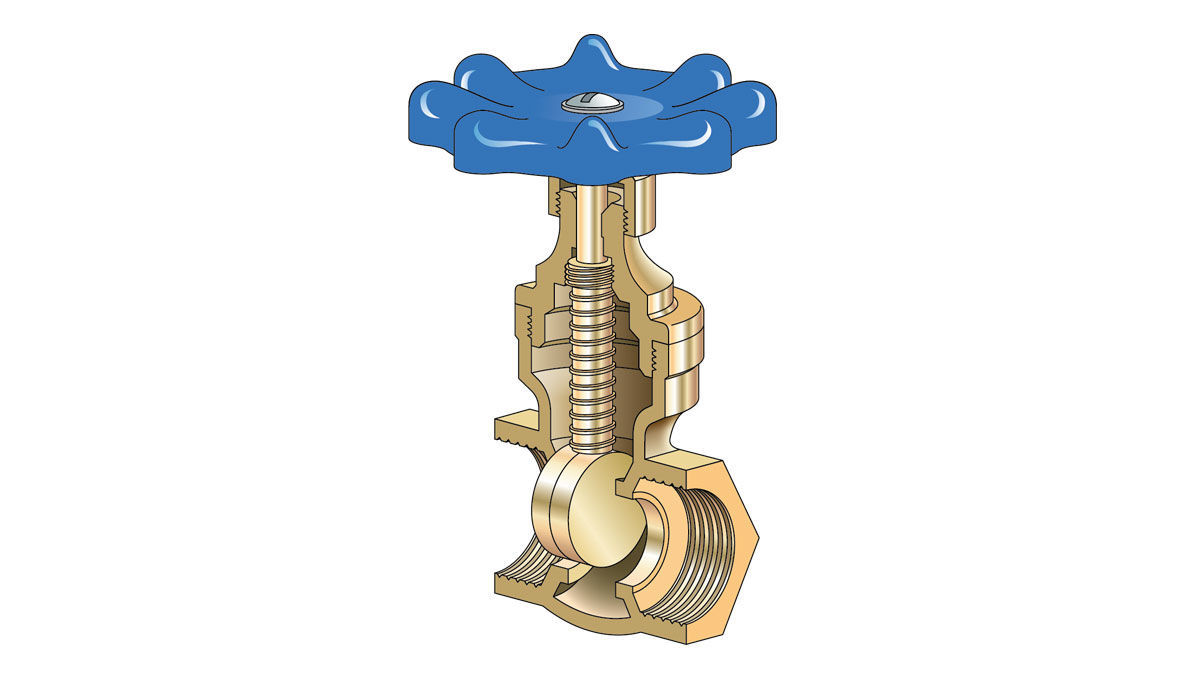 A gate valve is operated with a wheel that moves a gate up and down. When the gate is in the lowest position, it blocks the flow of water; when it’s in the highest position, water can flow freely. Gate valves have either rising stems, which enable you to tell visually if they are open or closed (although not as clearly as the lever on a ball valve), or non-rising stems, which don’t. Gate valves are susceptible to corrosion, which can prevent them from opening or closing fully. A heavily corroded stem can even break, rendering the valve useless. Because they open and close slowly, gate valves won’t create water hammer. They should be used only in the fully open and fully closed positions. If a valve is left partially open, the gate will vibrate and may become damaged. 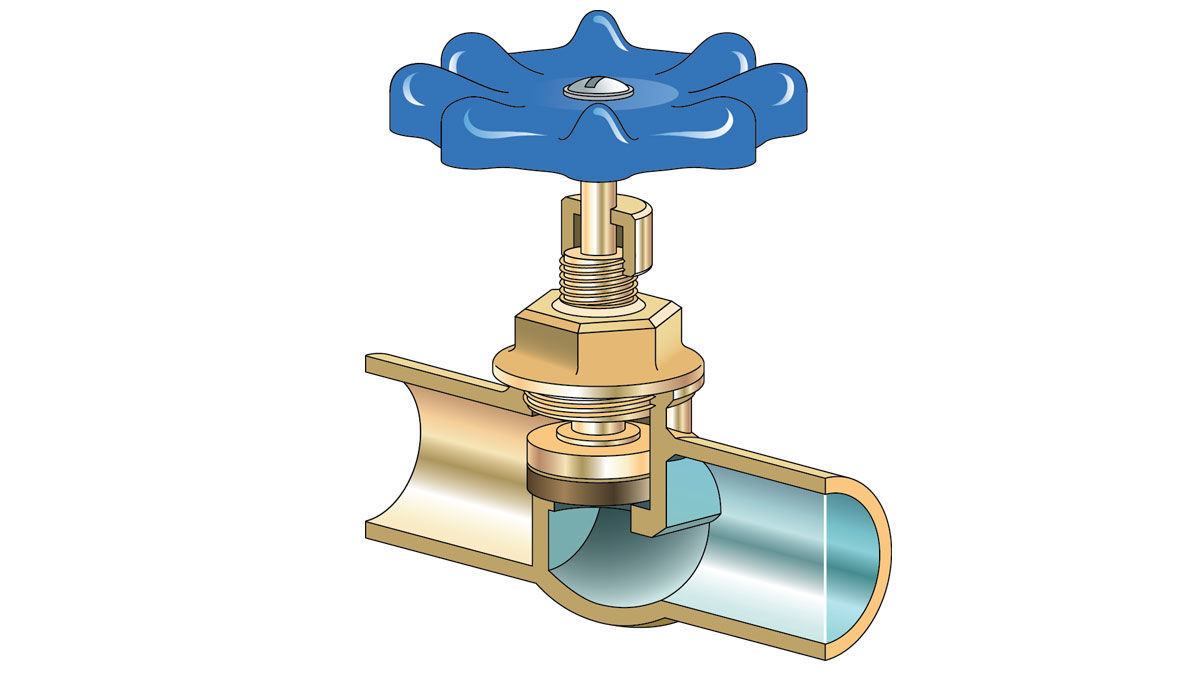 Unlike ball valves and gate valves, globe valves are designed for limiting the flow of water. They are operated with a wheel and a stem like gate valves, but the stem is attached to a stopper that seals shut a baffle—essentially two half-walls that force the water to flow in an Z-pattern. Like gate valves, globe valves close slowly and won’t produce water hammer. Because the baffle makes it impossible for water to flow through the valve freely, even in the fully open position, a globe valve reduces water pressure. That reduction, however, makes the stopper and seat less vulnerable to damage than the gate in a gate valve. For water to flow through a globe valve efficiently, the valve must be installed so that the water encounters the top half-wall first. The International Residential Code prohibits globe valves from being used for the main shutoff and the water heater; these locations must have full-open valves, either ball valves or gate valves.

Bad vibes from pressure-reducing valves – Q: I recently had a pressure reducer installed in my house after the abnormally high (120 psi) water pressure was threatening to blow all my faucets apart. The faucets have …

Shutoff That Won’t Shut Off – Take the opportunity to upgrade to a frostproof hose bib and eliminate the need for that shutoff.