How to Repair a Butchered Floor Joist

Do all plumbers hack away offending pieces of framing as they run drain lines, set toilets, and otherwise go about their rough-ins? Of course not. Yet this reputation, or maybe we should call it an urban legend, has a way of lingering. And Tackitybits could tell you why: He’s seeing first-hand what happens when the only thing standing between a plumber and a successful toilet installation is a floor joist.

“Eleven years later I find the toilet, flooring and subfloor all failing because of the sag in the floor, created by sawing through an I-beam joist that runs the length of the house,” Tackitybits says in a post at Fine Homebuilding’s Breaktime forum. “The joist was cut to make room for the PVC waste pipe for the toilet.

“Only a small section in the Master Bath is affected but it looks like I will have to pull the vanity, cut out old sub flooring and figure out how to support that section of the floor where the toilet will rest, once all the repairs are done,” Tackitybits continues. “It’s possible I might be able to sister up about a 14-foot length of joist to the I-beam that’s been sawed through. Is that the best way to go? What about the sag?”

It may look like an open-and-shut case of plumber malfeasance, but some of the replies to the original post disagree. Maybe the plumber tried to get the framer to fix the problem but was ignored. Why didn’t the framer anticipate the plumber’s dilemma and move the joist? Where was the general contractor while all of this was going on?

And, as important, what the heck is Tackitybits supposed to do about it now?

That’s the topic for this month’s Breaktime Spotlight.

Homeowner has an ‘easy’ lawsuit
In a situation like this, it’s easy to heap scorn on the plumber.

“It pisses me off to no end when plumbers do that,” writes BossHog.

MLB_Construction is not far behind: “Do you know the plumber that did this? Is he still in business? If you know his name and he’s still around, I would contact him first. He has codes he has to abide by and he knows what he can and cannot drill through. You can plumb through I-joists but not like that.

“You have an easy win with a lawsuit,” MLB continues.

And finally this tongue-in-cheek addendum from DanH: “Ah, but part of the ‘code’ is that a plumber has to saw through some structural member on every job. If he doesn’t they’ll drum him out of the union. Same as the rule that an electrician must drill through at least one drain pipe.”

“…There is NO excuse for the plumbers’ action,” adds Renosteinke. “It violates the first rule tradesmen are taught: Don’t mess with the structure. When the plumber discovered the problem, THEN was the time to stop work and say ‘I can’t do my job until the framing is changed or the toilet relocated.’

“I can’t understand how pumbers get away with this all the time – somehow inspectors have no problems nailing electricians for similar issues. Let a few plumbers get charge-backs, and you can be sure the problem will disappear. Let a few jobs grind to a halt, while the ‘fix’ is approved and the framer gets a charge-back, and the problem will disappear. Let a few architects and engineers eat the change orders, and suddenly the framing plans will improve.”

Plenty of blame to share
Although the plumber apparently did the cutting, the problem may have originated elsewhere, Rdesigns suggests. Everyone from the building inspector to the general contractor could share some of the blame.

“The problem started with the framer–he KNOWS that toilets rough in at 12 in. from the back wall, and his floor plan showed where it was to be located side-to-side,” Rdesigns writes. “The plumber probably located the toilet right where the plan showed. Did he tell the framer that he had to chop the joist? Maybe. But, even if he didn’t, the framing inspection is supposed to be done after the other trades (plumbing, electrical, HVAC) have finished. The framing inspector should have caught this, but he might not have bothered to crawl under there to check.

“The general contractor would share blame as well since he hires the subs.”

Quit picking on the framer, MLB argues. “You can’t blame it only on the framer,” MLB writes. “They go by the framing plans, which do onot show toilet locations unless the architect puts it in the framing plan. “If this was done via a bathroom remodel then the responsibility lies on the contractor who did the job or the plumber if the homeowner acted as the contractor. Plumbers know better. They should have stopped the job and told someone what was going on.”

BossHog would still give the screw-up award to the plumber. “All he had to do was stop and let the GC or framer know there was a problem, rather than cutting an I-joist in half. Anybody with half a brain knows that’s wrong.”

But DanH is still pleading for understanding. “We don’t know a lot of things,” he writes. “The plumber may have been screaming for three days that there was a problem, while the contractor just scratched his arse and did nothing about it. In which case I’d not blame the plumber for butchering the joist.”

How to fix the problem now
Whether it was the plumber, framer, inspector or someone else who’s ultimately to blame, Tackitybits still faces the question of how to repair the damage. The I-joist is incapable of bearing its full load, as evidenced by a sagging floor.

“Possible fix. Install 8-ft. pieces 3/4-in. plywood web stiffeners on both sides of the I-joist on either side of the hacked one. Remove a section of the hacked I-Joist, add new I-joist perpendicular on both sides of the plumbing pipe using hangers. The new I-joists should have plywood web stiffeners also.  Most I-joist pocket framing guides show an example of how this is done.”

If the bathroom is over a crawlspace (which it is), IdahoDon writes, the solution seems like a “no-brainer.” Head off the damaged section and add a few load-bearing posts on adjustable post bases and precast concrete bases. “That will pass code anywhere,” Idaho says, adding that if Tackitybits isn’t sure how to carry out the repair I-joist manufacturers can offer plenty of advice.

In a members-only article from issue# 232, plumber Mike Lombardi demonstrates how to fix a failing bathroom floor.

In the Q&A department of this same issue, the Fine Homebuilding editors asked code official Glenn Mathewson how to safely lower floor framing to make room for a barrier-free shower. 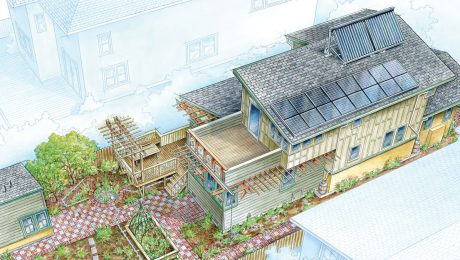 Building Better Houses is Good for People and for the Planet

In honor of Earth Day, we've compiled some of Fine Homebuilding's best articles and videos on sustainable design and construction to inspire you to create comfortable homes that save energy and materials and sit more lightly on the land.