Many of us are familiar with the bloated “great rooms” of the McMansion era. Often including an entry, they set arriving guests and meandering homeowners adrift in cavernous open living spaces beneath vast cathedral ceilings. The effect was far from great. Such spaces lacked scale and nuance. Simply put, they made people uncomfortable.

That’s not to say that you can’t have a comfortable open kitchen, dining, and living space with a cathedral ceiling. You can, thanks to thoughtfully designed cathedral ceilings that introduce different levels of enclosure, overhead density, and orderly rhythm.

The three examples here are all set within the same basic geometry. They share the same plan, which is a modestly sized open kitchen, dining, and living space beneath a gabled roof with a cathedral ceiling. A kitchen work area anchors one end of the space, and a fireplace anchors the other. The entry is to the side under a lower ceiling, which provides a transitional area to hang up coats and share greetings before you experience the release of the cathedral ceiling in the open living space. The plate height in each open living space is 9 ft. (which allows for transom windows), and the ceiling peak is about 16 ft. above the floor. This creates a spaciousness that belies the efficient footprint. 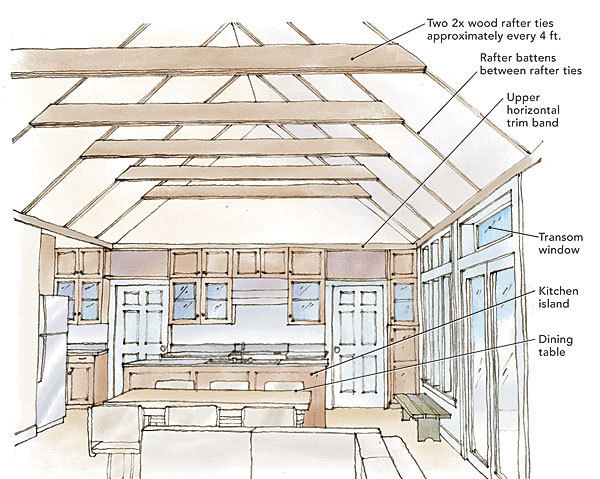 A clear-finished cathedral ceiling with exposed finish-grade wood framing and a board ceiling appeals to many. Few, however, can afford it. A compromise solution, illustrated here, achieves much of the same effect for a fraction of the cost. A skim-coat plaster or wallboard cathedral ceiling receives paired wooden rafter ties that are sistered to rafters approximately every 4 ft. Wood ceiling battens are applied at rafter locations and imply the rafters without having to reveal them. Ties are set in the bottom third of the gable.

These somewhat hefty rafter ties provide a moderate sense of enclosure, much as the branches of a tree canopy might. They offer overhead density that can feel sheltering, and they suggest a more nestled ceiling plane. The overall look can be Craftsmanlike, if, for example, the rafter ties, battens, and upper horizontal trim band are all clear-finished wood such as fir. The kitchen cabinets also could be clearfinished fir to enhance the look further. The window trim could either follow suit or be painted to contrast the bright work, as on a boat. The differentiation that the rafter ties and related trim provide lends the cathedral ceiling scale and nuance, rendering the space more comfortable. 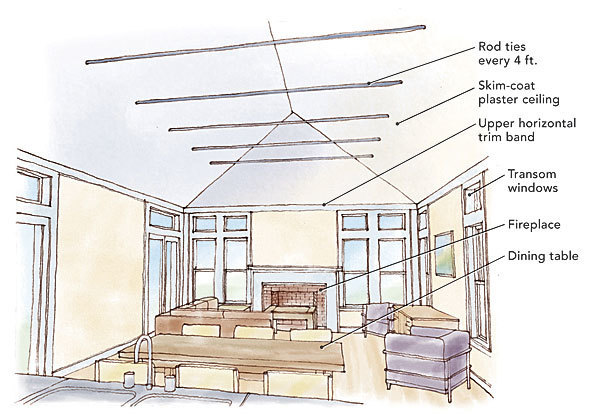 For a lighter, less enclosing effect, threaded-rod rafter ties can be a good choice. As in the wood-tie example, rod ties here are spaced approximately every 4 ft. in the bottom third of the gable ceiling. Another means of preventing the walls from splaying, rod ties are well suited to a more minimal look. They imply a less dense ceiling plane. If painted, their impact can be even quieter, while still creating a soft, delineating rhythm.

The upper horizontal trim band helps to set off the more muted ceiling and allows for a paint transition line. For instance, the end gable wall could be the same color as the ceiling, which could be a different color from the other walls, and the trim could be a transitional color. Without the wrapping horizontal-band trim, the end-wall color would extend to the ceiling, which might cause the space to feel less grounded. If, however, minimal trim is desired, a change in the ceiling finish to either painted boards or clear-finished wood could help to enliven the palette while also better grounding the ceiling plane.

If the budget doesn’t allow for a board ceiling, I recommend keeping the upper horizontal trim band and opting for a skimcoat plaster ceiling. A good plasterer could probably finesse the intersection of the rods and plaster ceiling. If, however, you’re looking for a more foolproof solution to the intersection of the rods and ceiling, consider surface-mounted metal brackets or washers, or small wooden blocks. 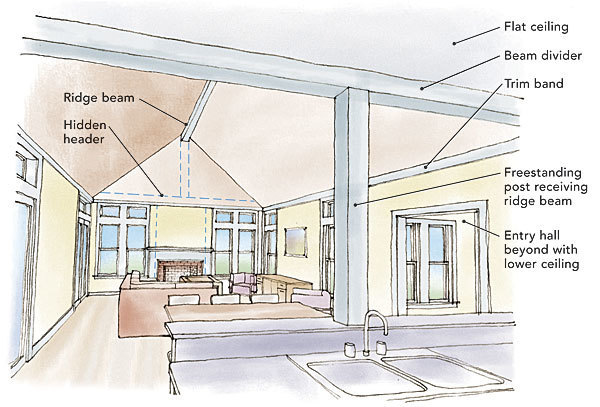 Homeowners often prefer a cathedral ceiling without rafter ties. A sizable ridge beam made of engineered lumber can eliminate the need for rafter ties. Compared to other options, this type of cathedral ceiling may offer the least sense of enclosure, the least density, and the least rhythm. For some, that’s exactly why they prefer it. This type of space is great for a large gathering, although it may not be as well suited to a solitary homeowner interested in curling up with a book.

The width and depth of the ridge beam mean that it protrudes into the triangular geometry of the gabled ceiling. If the ridge beam is boxed out with wood trim, a painted or clear-finished wood ceiling could give the ceiling a heavier appearance. Then it might feel less overwhelming. If the ridge beam is boxed out with wallboard and is flanked by a plaster or wallboard ceiling, I recommend using paint color to help counter its apparent height. Here, the upper horizontal trim band can help to define color regions to make paint transitions more seamless.