Finishing Touch Extra: Porch from the Past

Have a look at a few more detailed photos of this remarkable porch restoration.

Read more about the Porch from the Past in the September 2013 Finishing Touch.

When Pat and Dan Miller bought their dream house, it was covered with stucco and inappropriate porches, but they knew it was an incredible Italianate underneath. Fifteen minutes after closing on their home, they took a hammer to the stucco in the hope of finding evidence of the original porch.

When they removed the prairie-style porch, the outline of a large, low support post was clear, but there was no paint shadow of a full post.

Trying to find a photograph of the original porch, the Millers contacted their local historical society and the great-grandson of the original owner, and they even placed an ad in the paper, all to no avail.

Then they started a serious study of Italianate porches. When on vacation, they took pictures of houses and porches, not scenery.

While reviewing pictures they took of a house in Milwaukee, they realized that no post mark on the house meant their home's original porch must have had double posts, with only one post next to the house, but not touching it.

The Millers admired a fancy built-up post they found on a house in Janesville, Wis., and decided to model their new porch posts after it.

They had an opportunity to purchase old-growth California redwood from a water tower taken down in Chicago. The pieces of wood were 12 in. wide, 2 in. thick, and 15 ft. long. Shortly after they did, then-mayor Richard M. Daley started a movement to save the 130 water towers that remain because they are such an important part of the skyline.

Dan cut, resawed, glued up, turned, and milled the old water-tower wood into the elements of the porch.

Regarding their porch rehabilitation, the Millers like to quote Franklin Roosevelt, who said, "Happiness lies in the joy of achievement and the thrill of creative effort."

They agree that the thrill of their creative effort to restore their porch brings them joy every day. 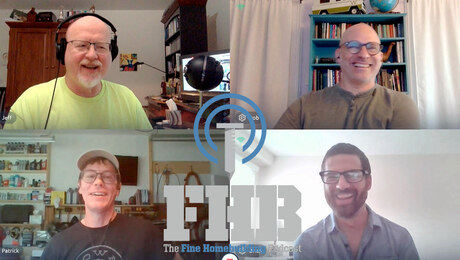 Podcast 372: Raising a Ceiling, Drilling in Concrete, and What Kind of Windows?

Brian, Rob, and Patrick hear from listeners about FHB Anniversary interviews and hated home features before taking listener questions about raising a ceiling, fastening to concrete, and air-sealing versus insulating.