A New Approach to Classic Cabinets

Designer and woodworker Mike Maines decided it was time to build a fireplace surround in his 1830s Greek revival home. He wanted to include a pair of bookcase cabinets that would have a somewhat modern feel but that wouldn’t look out of place. In this Project House article, he shows how he built these cabinets on site. He began by making the face frames with rails and stiles of 3/4-in. poplar fastened with pocket screws. He used 3/4-in. veneer-core plywood for the carcases, which he tacked together with finish nails to provide enough wiggle room for lining up with the face frames. With both parts properly aligned, he fastened them together with pocket screws, then secured everything with additional screws. The backs for the cabinets came from red-birch boards cut from logs recovered from a lake. To allow for seasonal movement while keeping the boards in plane, Maines cut grooves in their edges and inserted plywood splines. He used a Festool Domino tool to cut slots in the panels, rails, and stiles of each door, then assembled the parts with glue and tenons. For hanging the doors, he followed two tricks he learned from a local cabinetmaker: First, mortise only the door, because the hinge leaf on the cabinet side creates the reveal; second, cut the mortises from the front of the door all the way to the back.

About This Video Series

We met up with Mike Maines at his 1830s Greek-revival home just in time for him to show us how to install a new fireplace surround. Mike is building all of the pieces he needs on site, mostly using tools the average remodeling carpenter would have on hand. The built-in features two symmetrical cabinets on either side of the fireplace, with bookshelves extending upward to the ceiling, and a mantel shelf connecting the two sides.… More about this Video Series 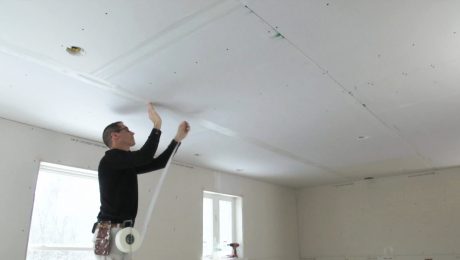 Myron Ferguson walks us through the proper sequence for taping seams on ceilings and includes helpful tips to achieve professional results.