Kitchen remodel: From passé to the present 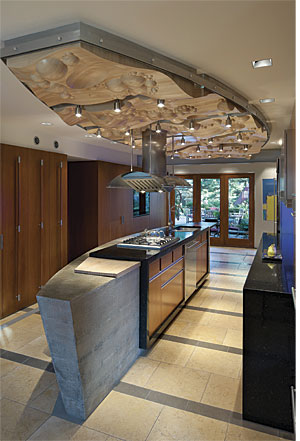 Architect Steven Ginn knew this kitchen was going to be a challenge the moment he laid eyes on it. Long, narrow, and dated, the original kitchen bisected the house, with its only windows at each end. The space acted as the hub of the home, with six doors entering into it. Ginn’s clients desired a simple, uncluttered space, which he realized could be obtained only by neutralizing the perimeter and making the space more centripetal. To this end, he designed a concrete island and a coordinating series of ceiling panels to animate the space. The concrete island, with its integrated black-granite workstation, is curved to facilitate access around it. Ginn devised the system of ceiling panels and lighting in response to the owner’s directive that there should be plenty of light. Boiling water, a basic element of cooking, was the inspiration for the panels. He also replaced the windows at one end of the kitchen with patio doors to bring in even more light and allow easy access to the backyard. Sequentially matched cherry-veneer cabinetry with steel hardware was used.

How did they carve that ceiling?

I had always been fascinated with the roiling bubbles of boiling water, which were the inspiration for the ceiling panels. As an adjunct professor at the University of Nebraska’s College of Architecture, I was introduced to CNC milling machines. A CNC machine uses a computer-controlled router head to cut wood and other soft materials in a variety of shapes. Laminated maple laid up like a thick butcher block became the medium for the panels. Using the software programs Rhinoceros and Grasshopper, my colleague, Kent Rasmussen, wrote the computer script for milling the panels, and David Walz of European Designs translated our computer code into the data that their CNC could read.

Each of the six panels took a day to cut and 20 hours of hand-sanding to remove the ridges left by the router head. Each panel weighs 300 lb., so the ceiling was reinforced to carry the additional weight. With help from Craig Tuttle Construction, each panel was lifted into place and attached with heavy-duty Z-clips.

The panels had nearly been cut from the project due to cost, until European Designs gave a set price for their fabrication. This gave the owners the peace of mind they needed to give the go-ahead to the panels and find savings elsewhere. I appreciated how the project came together as a result of the contractor’s willingness to solve problems creatively. Everyone seemed to enjoy the process, and the owners are elated with the results. 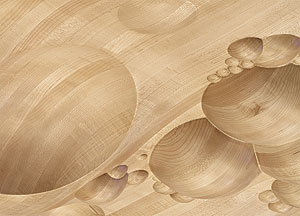 Four steel support posts were erected in the basement to help support the approximately 7000-lb. island. The custom-designed bubinga folding table at the end of the island was designed to add flexibility to the space. The island and the counter opposite it are topped with black granite. An internally illuminated custom-designed LED backsplash cycles through all the colors of the rainbow. The upper cabinets above the LED wall are constructed of wood and clad with Chemetal panels. The Egyptian yellow limestone floor with radiant heating completes this sleek renovation. 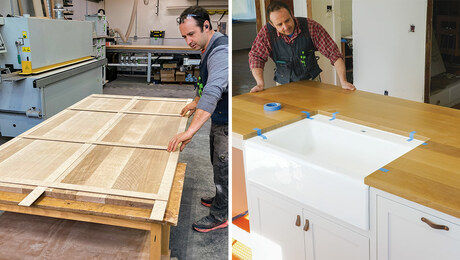