We think that attitudes about living closer together have shifted only recently. But 20 years ago, when submitting plans to convert my detached garage into a home office, I was introduced to the concept of second units.

Knowing that density had become a concern in my town, I had taken my design to the planning department expecting that I would need to defend the garage conversion as not a separate living unit. I thought I was on safe ground because there was no kitchen in my design. To my surprise, however, the official who reviewed the plans noted that my project would make a great second residence and then asked if I would consider adding a kitchen to make it one. I was stunned.

Also known as secondary units or accessory dwelling units, second units are a way for municipalities to meet the demand for affordable rental housing and for empty nesters who want to downsize and rent out their main house rather than move. The less intensive alternative, a guest suite connected to the main home, shares a few characteristics with a second unit, but it has some key differences. A second unit can be developed in stages, starting with a guest suite and then transitioning as a household evolves. The drawings illustrate a project of this type and highlight alterations necessary to transition a space—in this case, an unused basement—to a guest suite and then a separate living unit.

In helping clients decide which option best suits their needs, I focus on two primary concepts: cooking and separation. Those elements determine just how independent a living space will be and what local laws will apply to them.

Planning departments typically define a separate living unit as having a full kitchen, which means that it has cooking equipment. When you have a refrigerator and a sink, even a dishwasher, you have a wet bar, not a kitchen. Add a bedroom and a full bath to that, and you have a guest suite— but not, technically, a second unit, even if it is separate from the main house.

The definition of separate also varies, but it usually means that the second unit and the primary residence cannot communicate directly through an interior door or other opening. While suites may be located at the opposite end of the house from the main bedrooms or on a lower floor, they are still connected to the house internally. This level of privacy might be all it takes to make extended-family members or multiple housemates feel comfortable, but a second unit requires constructed boundaries. The second unit needs its own exterior door, although in some circumstances it can also share a garage or unconditioned breezeway with the main residence.

Local zoning rules may limit the size of second units, but they often get special exemptions from density limits and floor-area ratios as well as an expedited design review. Typically, a second-unit addition is considered subordinate to the primary residence and must be architecturally compatible with the residence. This does not always mean the architectural style must be identical.

It is essential for anyone considering a second unit to become familiar with the local planning-and-zoning ordinances. It is also a good idea to consult with an architect to help navigate the design constraints. Good architects know how to transform the complex web of guidelines and restrictions into an opportunity for a delightful living space rather than a merely functional one.

An existing walkout basement with high ceilings is one type of space that presents an excellent opportunity for either a guest suite or a true second unit. This example shows how the conversion might be done in stages as the needs of the household evolve. Turn the pages to see how to make this space into a guest suite and then a secondary dwelling unit. 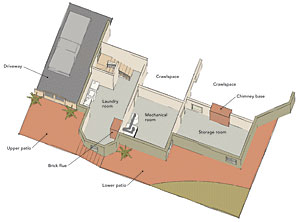 The first stage in this remodel involves moving mechanicals and bringing the spaces up to current codes. Doorways are relocated, and circulation paths are altered for privacy and flow. A shared bathroom for the house and the suite is added. Windows are enlarged, and a closet is added to create a bedroom. Because the space is still connected to the main residence and does not have a separate kitchen, it is considered a suite rather than a second unit. 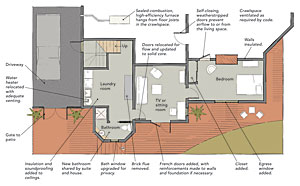 Conversion to a second unit

To convert the suite into a fully independent second unit, the area is walled off to create an entirely separate dwelling area. A kitchen and exterior entry are added, and the bathroom is limited only to occupants of the unit. Extra amenities include an undercounter laundry and storage in an improved crawlspace. Second units can be located in a basement, above the garage, in an addition, at one end of the house, or in a separate building as long as they meet local residential codes and safety requirements. 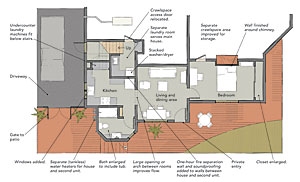 Local ordinances vary, but here are some rules you may encounter when planning a second unit.

Drawings by the author.