Amid claims that it will make showering “transformative,” and a Kickstarter campaign that captivated Silicon Valley’s elite (while raking in more than $2.5 million in funding), the Nebia showerhead has gotten a lot of attention.

References to computational fluid dynamics aside, the Nebia’s selling points-an atomized spray, DIY installation, and height adjustability-aren’t particularly new. Where it may stand out, though, is in the quality of its ultrafine mist and its ability to retain heat in that mist. (Those who have tried it liken the experience to standing in a warm cloud.) Its 0.75 gal. per minute (gpm) flow rate is less than that of the stingiest (1.25 gpm) water-conserving showerheads already available, but the marketing emphasis is on comparing the Nebia to showerheads that meet only the federal maximum flow rate of 2.5 gpm (a savings of 70%).

Nebia’s minimalist design oozes high-tech grace, with a high-density polymer head and a circular wand that affixes to the shower wall on a buttonlike knob. Like any replacement showerhead, the Nebia attaches to the shower arm, requiring the use of existing control knobs and valves-which may or may not detract from the slick appearance. Its makers project that if everyone in California were to install one, they’d save a collective 203 billion gal. of water per year (assuming, of course, that the transcendent Nebia experience didn’t entice them to remain in the shower for hours).

Priced at kickstarter.com at $299, the anticipated retail price is $399. 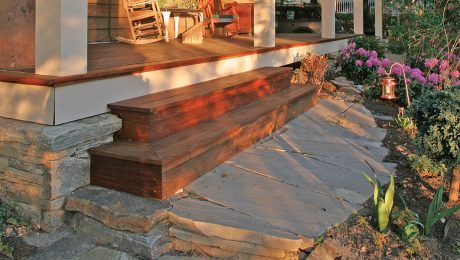 Beams set on concrete blocks or continuous posts set on round piers are both sturdy ways to support porch floors and roofs if you get the details right.