Dekton, the ultracompact surface from Silestone manufacturer Cosentino, has increased its color options to 23.

The eight new hues include Dekton’s first foray into wood looks, with Borea (mimicking a deep mahogany) and Makai (evoking driftwood). Entzo and Kelya (modeled on Spain’s Calatorao marble) continue Dekton’s ambitions to stand in for stone; the delicately speckled Keon looks convincingly like concrete. Three new neutral solids (Ventus, Korus, and Galema) round out the debut. Introduced in 2013, Dekton is composed of glass, porcelain, and quartz fused together in a process called particle sintering, which mimics the formation of natural stone in hours rather than millennia. The durability of the resulting material-zero water absorption; color and dimensional stability; and resistance to heat, stains, abrasions, scratches, fire, and freeze-thaw damage-extends its uses far beyond kitchen countertops. 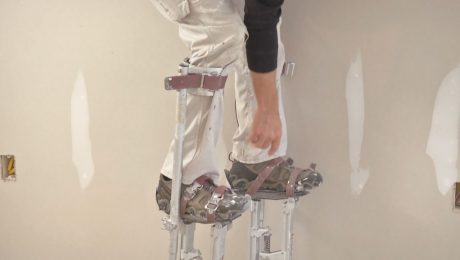 How to Use Drywall Stilts

Avoid dealing with ladders by learning how to climb into a pair of stilts to work on ceilings.