How to Reduce Heat Loss Through Footings

Pouring a concrete slab on top of a thick layer of rigid foam is an effective way to create a super-insulated foundation.

Some types of foundations can lose heat through concrete footings. Fortunately, heat loss through footings is usually minor, so it’s perfectly reasonable for most builders to ignore the issue. The amount of heat that flows through a concrete footing depends on the depth of the footing (shallow footings lose more heat than deep footings), the climate, and the builder’s performance goal. If the goal is to meet a strict standard such as Passive House, addressing this thermal bridge may be important. 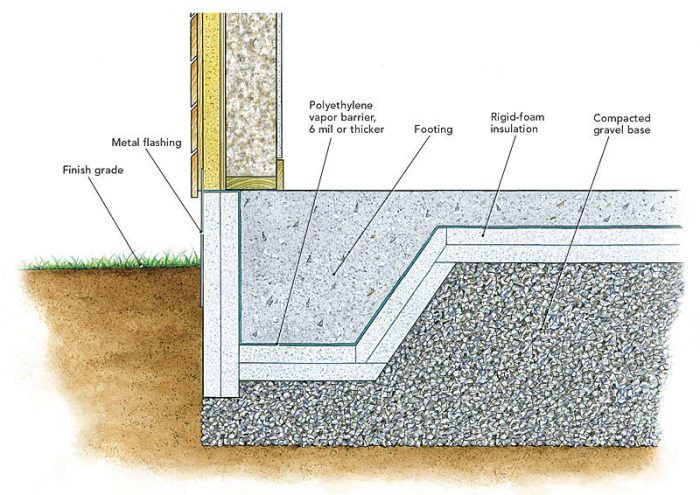 Can foam support a house?

Engineers tell us that good soils should be able to support 3000 lb. per sq. ft. (20.9 psi). Most brands of extruded polystyrene (XPS) insulation, including Owens Corning Foamular and Dow Styrofoam, have a vertical compressive strength of 25 psi. That’s more than many soils that are routinely used to support a footing and a house. It’s also possible to order high-density XPS or expanded polystyrene (EPS) with higher compressive strengths (40, 60, or even 100 psi).

Building scientist John Straube points out that when rigid foam supports a load, it can suffer from “creep,” a type of compression that occurs slowly. “Over 50 years, the foam can shrink by 10%,” he explains. As long as the creep is consistent, however, the building sitting on the foam shouldn’t suffer harm. “The real problem isn’t settling; it’s differential settlement,” says Straube. Of course, uneven settlement can damage a building. A foam manufacturer’s listed compressive-strength rating may not account for creep, so it’s always a good idea to consult a structural engineer before designing footings that sit on foam. Dow states that vertical compressive strength is measured at 5% deformation or at failure, whichever occurs first. To reduce the likelihood of creep leading to differential settlement, Dow recommends a safety factor of 3:1. For example, if 20 psi is desired, using 60-psi foam would prevent a problem.

An insulated raft foundation is a load-bearing slab on grade with a uniform thickness rather than a thickened edge. The thickness of the concrete and the rebar schedule are designed to support the loads that are imposed by the perimeter walls and any interior bearing walls. 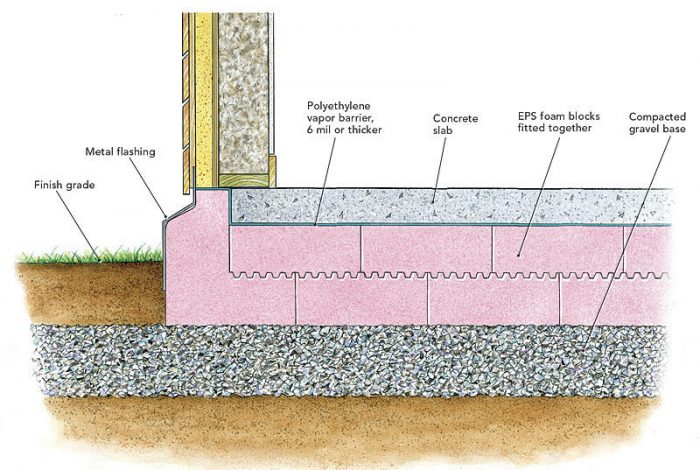 We compiled this list of our favorite tools and gear to help you find great things to get for the handy people in your life.