Every house should be built on a solid foundation and the FHB House is no exception. In fact, like other elements of the project, we wanted the foundation to demonstrate best practices and to work as part of a system for this performance-oriented house.

The sloping site suggested that we would have a walk-out basement, which in my experience usually means poured concrete walls on footings stepped to stay below the frost line, with rigid insulation on either the interior or exterior of the walls to meet or exceed code requirements in cold climate zones. Usually the concrete is kept relatively close to grade, with the remainder of the walls built with framed walls. 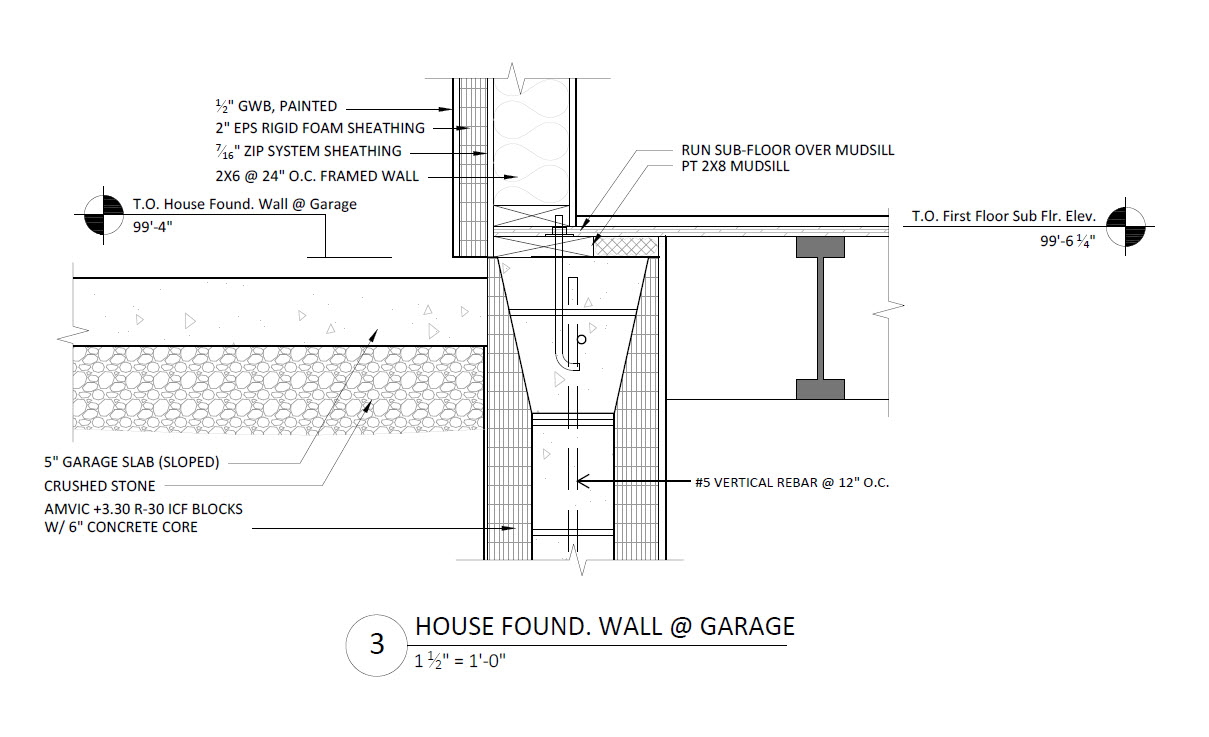 For the FHB House, we are using a tried and true system that is, however, new to me: ICFs—insulated concrete forms. While poured foundations, usually 8” thick but sometimes more (and occasionally less) require extra effort to insulate, and are prone to cracking when the forms are stripped before the water in the concrete mix has time to fully hydrate the chemical reaction, ICFs provide integral foam insulation and allow the concrete to cure over a long period by holding moisture in—a big plus in my concrete-nerd book. Most importantly, they are a system that Mike Guertin can install himself, providing flexibility in the schedule and keeping his outlay to subcontractors to a minimum. He does not have to buy, store and muscle around plywood or aluminum forms; for the most part he just has to stack the ICFs like big Lego blocks, then have a concrete ready-mix truck fill the forms. We are using Amvic’s Amvic+ 3.30 product line. 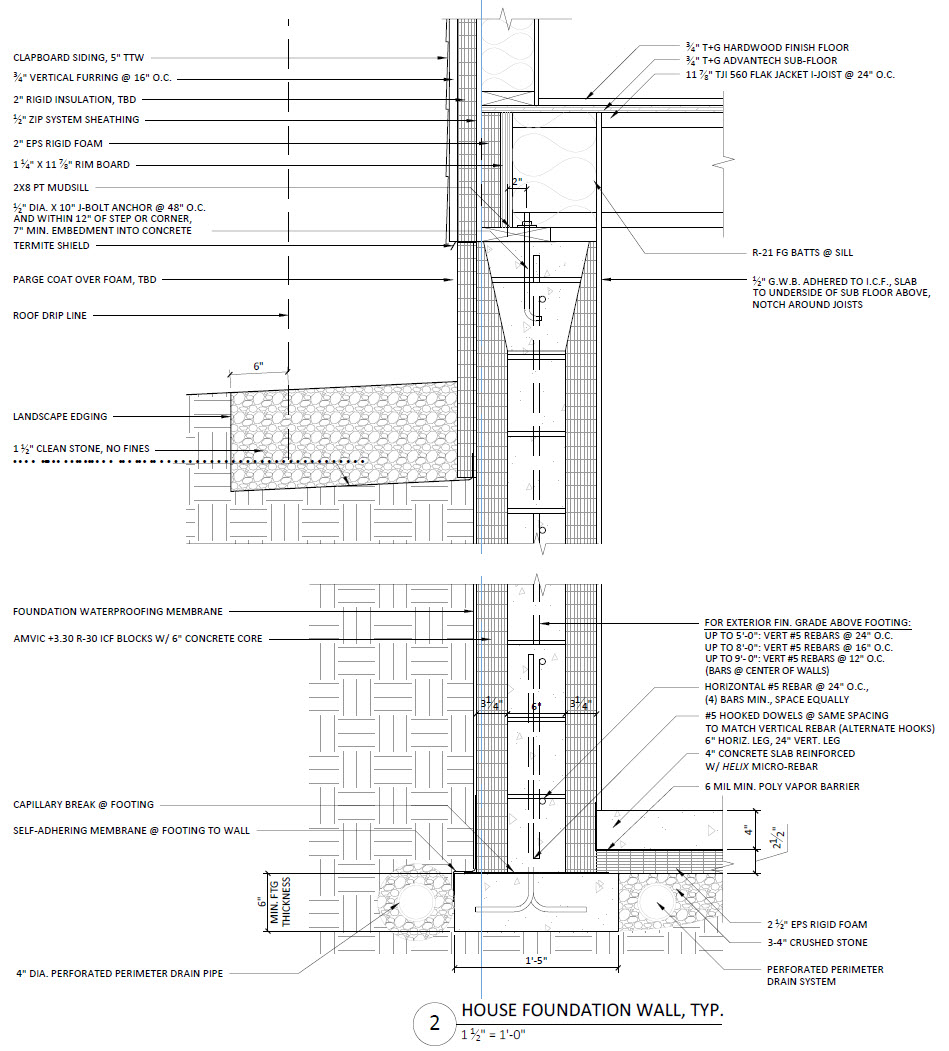 A good foundation has to sit on good substrate. According to the IRC 2012, which is the basis for Rhode Island’s building code:

“Footings shall be supported on undisturbed natural soils or engineered fill.”

On top of the substrate is the footing, which can be a range of different sizes depending on the situation. The primary reason for the footing is to spread out the static and dynamic loads on the building, but the footing also creates a flat, level surface on which to place wall forms, and when tied to the wall with steel rebar, footings can also resist upward loads, as might be imposed on tall, narrow buildings when strong winds or seismic loads try to push them over. Footing size depends on the building loads and the soil bearing capacity, and are often built larger than loads and code require.

Footings are often shown and sometimes built with keyways, which are trenches cast into the footing to “key in” the walls once they are poured. They are intended to prevent lateral movement, but even with  soil pushing on the exterior, a slab floor poured on the inside, and with rebar spanning the cold joint (where concrete is poured against already-cured concrete), there is typically little need for a keyway.

There is a need for a capillary break, one of those details that some builders are still lagging on incorporating because the advantages can be hard to observe. In a tight house,when the porous concrete is allowed to wick water from the soil, moisture-related problems occur that could have been easily avoided by adding a capillary break. There are several products designed to be a capillary break between the footing and the wall above, to reduce or eliminate moisture movement from the ground up into the wall. Footings sometimes include rebar, but often don’t, for the simple reason that the wall above functions as a giant beam (especially if it includes horizontal rebar) so the extra reinforcing that rebar in the footing provides is just not needed. 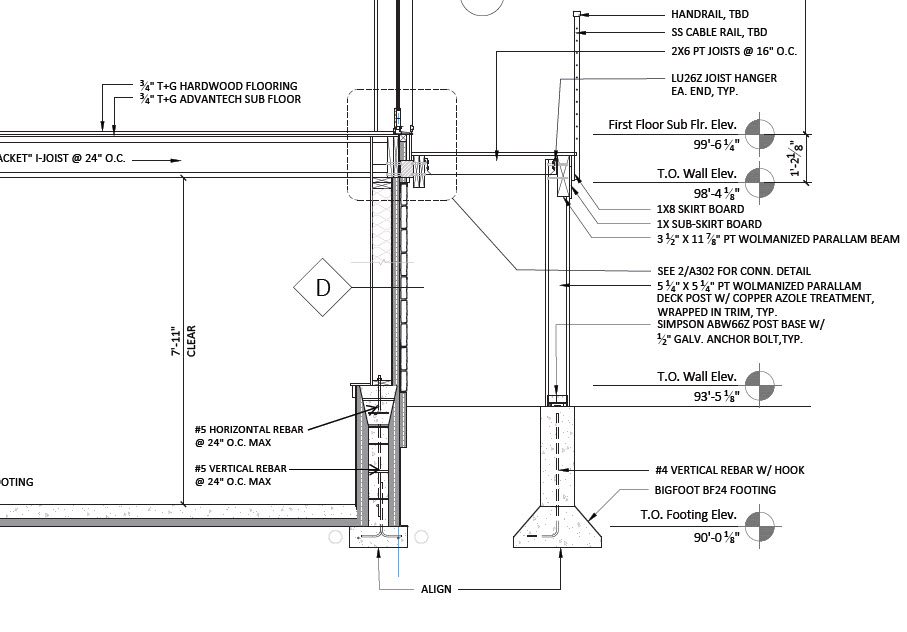 A Hybrid Approach to Footings

The Amvic brand blocks we chose have the highest insulating value in the industry. Each side of the form has 3 ¼” of foam at R-13.67 per side; once the other components of a typical wall are added, the whole wall is rated at R-30, which exceeds code and is about the same as our framed walls above. (Code requires R-15 continuous insulation (or R-19 cavity insulation) for basement walls, and R-20 for framed walls in Rhode Island’s climate zone, 5.) The blocks are made from EPS (expanded polystyrene), which has the most environmentally friendly blowing agent of any rigid foam and an R-value that remains constant over time.

Our intention was to use framed walls instead of ICF’s for the above-grade portions of the basement walls, which would make it easier to frame out the window and door openings, and minimize the use of energy-intensive concrete and foam. However, our structural engineer calculated that we needed to make most of the foundation full-height ICF’s in order to resist soil pressure from the uphill side. We argued about this detail, as many foundations have part-height concrete walls, but in the end the engineer would only approve the drawings with a small portion of the south wall framed. Hydrostatic pressure in the soil exerts a tremendous amount of pressure, and with a two-story structure in a 110 mph wind zone on top of the foundation, the engineer was not comfortable skimping on what amounts to bracing the foundation walls. He also spec’d a fairly rigorous rebar schedule, which provides a tension element that works with concrete’s compressive strength to create a robust foundation wall.

Although we don’t need the insulating aspect of the Amvic forms for the entry porch and garage foundation, it made sense to use the same system so Mike and his crew could do the work at the same time, without having to bring in subcontractors.

In future posts I’ll write about how we’re treating the exterior of the foundation and dealing with stormwater and groundwater management. 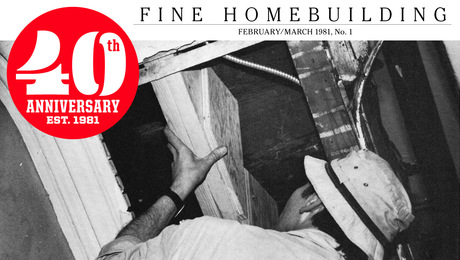