Due to the slope of the lot and site work that took place before Guertin purchased it, he only had to dig down 18 in. for the conventionally formed footings. After the foundation is poured, he will truck in dirt to backfill the north and west sides of the foundation, bringing the grade to full height along the foundation walls. The south- and east-facing walls will remain exposed and create a walkout basement. This will offer the homeowners direct access between the yard and the basement and more flexible use of the basement should they wish to finish it in the future. But it also presents some complications for the builder. With part of the foundation below the frost line and part with the footings just 20 in. below grade, the foundation is a hybrid of a traditional frost-protected foundation and a frost-protected shallow foundation.

Guertin has chosen to use insulated concrete forms (ICFs) for the foundation walls. Among the reasons he likes ICFs is that they don’t require separate formwork. They’re installed easily and quickly by a pair of competent carpenters and help keep the project on schedule by eliminating the need to schedule a foundation subcontractor. Unlike board forms that limit the basement headroom to about 7 ft. 8 in., the modular nature of ICFs lets Guertin stack blocks for a full-height 8-ft. basement ceiling. Perhaps foremost among the advantages of using ICFs is that they inherently address the shortcoming of most foundations: no insulation. By using rigid insulation as the form, the insulation becomes part of the wall, and there are no forms for Guertin to strip off after the pour. Many ICFs provide an R-value of about R-20. The Amvic 3.30 blocks chosen for the FHB House have thicker foam than most and provide R-30 insulation and a 6-in.-wide concrete core. Even with this integrated insulation, the exterior of the footings and below-grade portions of walls on the walkout sides of the basement require an additional 21⁄2 in. of rigid EPS to circumvent heat loss.

While ICFs use less concrete, they require more steel than conventional foundations, with horizontal and vertical rebar at 24 in. and 16 in. on center, respectively. Even with the rebar, the engineer on this project was concerned about the soil pressure from the north and west sides without backfill on the other sides. His concern related to potential hingepoints, weaknesses at connections of different assemblies—in this case, at the junctions of wood and ICF walls. The original plan was to stick-frame the walkout portions of the basement to “future proof” the basement by providing flexibility for window arrangements and door locations. To allay the engineer’s concerns, however, the plan was modified to use ICF construction everywhere in the foundation except for a small area around the windows on the south side.

ICFs require special treatment on both the exterior and the interior because of their foam faces. Inside, code requires that a thermal barrier or ignition barrier be installed over the foam. Here, it will be CertainTeed drywall. On the exterior, Guertin will use a belt-and-suspenders approach to protect the foam. First, he will cover it from the top of the ICF down over the footings with ProtectoWrap’s Protecto Universal Primer-Free Membrane, which serves as an ICF waterproofing membrane. Next, he will install a dimple mat. This sheet provides drainage space, eliminating hydrostatic pressure, and serves to protect the waterproofing membrane from damage during backfilling.

Slab details for a continuous vapor barrier
In a high-performance house, Joe Lstiburek of Building Science Corporation recommends insulating basements north of the Mason-Dixon Line with R-10 subslab insulation and R-20 foundation insulation. The FHB House’s ICFs exceed his basement guideline. To insulate the 4-in.-thick concrete slab, Guertin is using 21⁄2 in. of EPS rigid foam, which provides R-12.5. The Amvic Silverboard under the slab has a polypropylene lamination on both sides that improves durability in this application. A 6-mil poly vapor-and-gas barrier goes over the foam. All seams are taped, and the ends of the poly sheets turn up the ICFs and are taped as well.

It’s important that the insulation and vapor barriers be continuous, so slab penetrations have to be considered carefully. The footings beneath the basement columns aren’t continuous with the slab. By forming the top of the footings 21⁄2 in. below the bottom edge of the slab, there is room to continue the subslab foam over the footings and to tape the vapor barrier to the columns.

A good gravel base ensures that the slab performs as intended. The insulation rests on 4 in. of compacted 3⁄4-in. crushed stone. This base serves several functions: It’s easy to level, it’s a capillary break, and it provides a space for water and soil gases such as radon to move horizontally and to collect in the perforated perimeter-drain pipe. The perimeter drain carries water to daylight well past the house through a sloped drain. A vertical riser from the perimeter-drain loop passes through the slab in the northwest corner of the house and terminates through the roof. The stack effect within the riser induces a slight negative pressure in the perimeter-drain loop. In his region, Guertin has found that a passive vent and a subslab plastic vapor barrier generally control radon levels in the house. If radon levels rise to the EPA’s action level (more than 4 picocuries per liter), adding a continuously running mechanical fan in the riser should correct the problem. 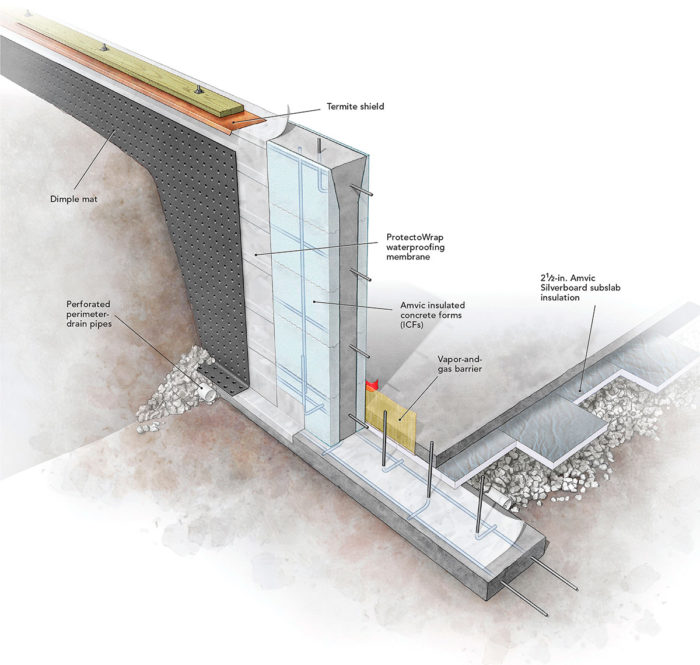