This morning SawStop, the inventor and maker of several versions of finger-saving tablesaws, claimed its first victory in a patent-infringement lawsuit with rival power-tool maker Bosch. Judge Thomas B. Pender, in a case before the U.S. International Trade Commission (USITC), found in an initial determination that the Reaxx finger-saving saw from Bosch infringes on patents held by SawStop. Based on the judge’s findings, SawStop has asked that the USITC have U.S. Customs stop the importation of Bosch Reaxx saws and replacement activation cartridges, which are made in Taiwan. The company has also asked the USITC to stop Bosch from selling and advertising the saws and parts already in the United States.

This is only the first round in a battle that will likely take months or even years to decide. The next step is for the USITC to decide if it should adopt, modify, or reject the judge’s initial determination. In a recent test of the Reaxx for Fine Homebuilding, editor at large Kevin Ireton wondered if early adopters of the Reaxx might be taking a risk if the court case was not decided in Bosch’s favor. In a written response to Ireton’s inquiry, the company claims it had “put in place the necessary sales and service resources to meet demand for the REAXX Jobsite Table Saw and ensure stocks of dual-activation cartridges.” It now seems that Ireton’s concerns have additional merit.

Stephen Gass, president of SawStop and inventor of the finger-saving technology, said, “The technology in SawStop saws wouldn’t have made it to market except for the protection offered by the United States patent system. We have invested millions of dollars in research and development to protect woodworkers from serious injury, and our inventions have been awarded numerous patents. Bosch chose to introduce the Reaxx saw in disregard of our patents, and we were left with no alternative but to defend our patent rights in court. We are very pleased Judge Pender confirmed that Bosch infringes our patents.”

This morning I contacted Bosch for their take on the proceedings. Click here to read the company’s response. 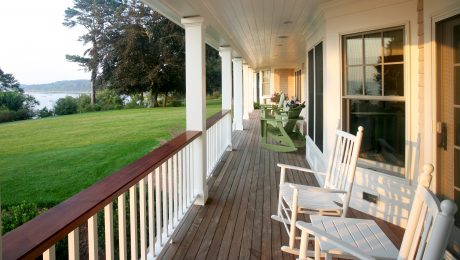 9 Trouble Spots on a Covered Porch

Manage moisture and the elements with these must-do tips for a durable porch.