Our 2017 award for Best Traditional Home goes to R. Andrew Garthwaite of Haynes & Garthwaite Architects. This Federal-style home is architecturally on point in Vermont’s historic landscape and generates more energy than it needs, allowing the homeowners to share the surplus with family living nearby. 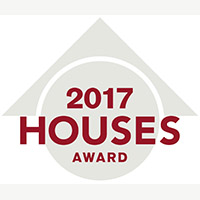 Doug and Joan called my firm in late January 2014 to explain that they had purchased property with a beautiful view and a 1950s ranch that was in terrible condition. A young professional couple who enjoys outdoor activities, they planned to remove the existing house and build a new family home. They had several goals that influenced our design work as well as the construction process. At the top of the list was a traditional exterior—a Federal-style farmhouse that would fit comfortably into its country-road setting. They also sought a compact footprint and energy-efficient performance, and they knew they wanted as few petroleum products as possible used in the construction and functioning of the house. They wanted a house that would be straightforward to maintain, with an open plan for the main living space.

It seems to me that for the last several years, high-performance homes have been developing an identifiable style that leans toward the clean lines and minimal details of modern architecture. With this project, we were able to redefine what’s possible when it comes to the appearance of a superefficient home. Specifically, we showed that a home built with today’s best practices that meets perhaps the most important level of energy performance—net-zero energy consumption—can have authentic, period-appropriate character. The site that Doug and Joan bought could not have been a better place for a sustainable, energy-efficient house. Not only is it environmentally and economically advantageous to build on an already developed site, but the excavator even found someone to repurpose the existing house as a hunting camp. With beautiful views to the south and east and the road to the north, we were able to set the house along an east–west axis so the south-facing roof would receive maximum solar collection but the photovoltaic panels would be hidden from almost every public view. In this way, the street-facing elevation is all traditional Vermont farmhouse. Fortunately, many of the hallmarks of traditional architecture complement sustainable and energy-efficient design. The simple shapes lend themselves to effective air-sealing and insulation details. 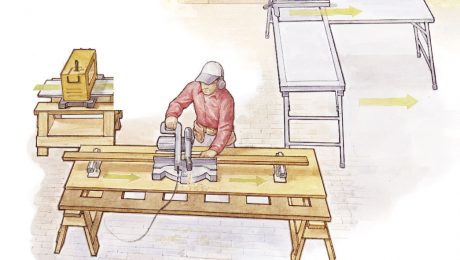 From folding workbenches, to sturdy sawhorses, and more, make the perfect work space for your next project.