In Love with Longleaf

Builder Scott McBride reminisces about discovering the wonderful qualities of longleaf pine while salvaging lumber from barns on an old estate.

Synopsis: Longleaf-pine forests once covered 90 million acres across the southern United States. Very little of that remains, but builder Scott McBride’s experiences with reclaimed longleaf pine have developed in him a passion for this wood. His essay on it is part memoir, part history, and part love letter.

In 1980, I was a young carpenter working for a custom home builder in Westchester County, N.Y. The builder was subdividing a once-elegant estate that had been built 75 years earlier for an oil and cotton magnate with the imposing name of Melchior Beltzhoover. Although most of the estate’s once-luxurious buildings had been demolished, a carriage barn remained, which my boss was repurposing as his sales office. To furnish the lobby, he asked me to make benches using some 2×6 tongue-and-groove boards that had been salvaged when we demolished the horse stalls.

As I began to work the 2x6s, I realized this was a wood I had never seen before. The weight of the boards suggested a hardwood, but my nose told me other wise. The aroma was sweet like white pine, but with a tangier bite to it. The smell also evoked a déjà vu that I would later connect with the smell of turpentine in art studios.

The shavings of my jack plane curled back to reveal a rich honey-colored grain with an almost translucent quality. The end grain showed tightly spaced annular rings with a sharp contrast between summer and winter growth. There was so much resin in the wood that it stuck to the sole of my plane, and I had to clean it frequently with solvent or the plane wouldn’t take a proper bite. 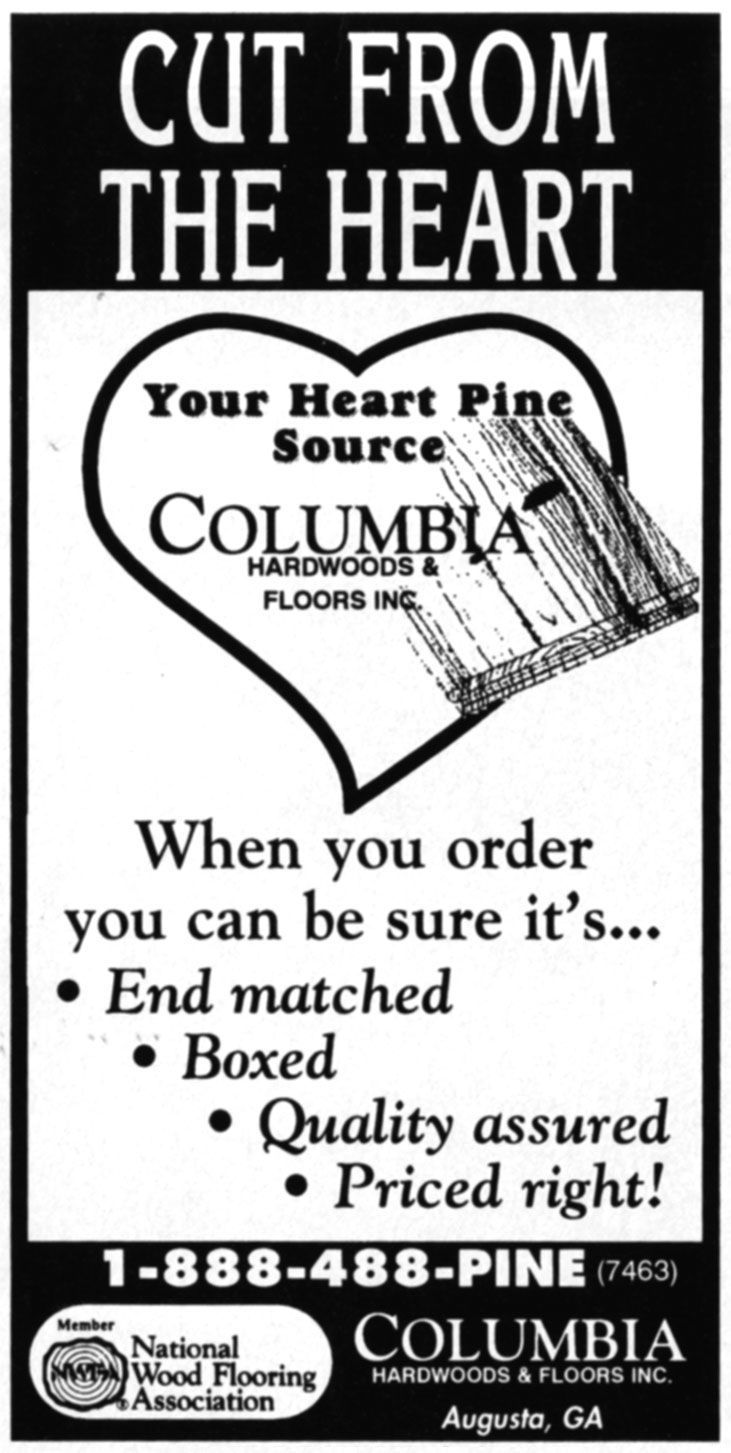 It took me a while to connect the strange wood I had encountered at the carriage barn with the “reclaimed heart pine” I saw appearing in ads in Fine Homebuilding. The name “heart pine” is confusing, since lumber cut from the heart (inner part) of any species of pine could reasonably claim that title. A more precise handle is the common species name: longleaf pine.

Our discovery in the carriage barn was a microcosm of a phenomenon then unfolding across the country—the reclaimed lumber movement. This was itself part of an even broader trend toward preserving our built environment—not just in museums but in living communities as well. A new cadre of urban pioneers began buying old brownstones and other “white elephants” to restore, and publications appeared to pass along technical know-how through articles, as well as sources of supply and their ads.

To provide period-appropriate materials for restoring old homes, or just to give an old-house feel to new homes, a new industry sprang up: the reclaiming of antique wood for either direct reuse as architectural salvage or as remanufactured products obtained by sawing large timbers into thinner boards, especially for flooring. These businesses were typically started by young, still longhaired entrepreneurs who ventured into the backcountry with a chainsaw and a flatbed truck looking for old cabins to tear down. It wasn’t long, however, before they realized that the mother lode of recyclable timber, especially heart pine, wasn’t in the boonies so much as in the “industrial forest” of nineteenth- and early twentieth-century mill buildings. These structures, built between the Civil War and World War I, had been framed with heavy timber not for aesthetics but for utility. Fat beams permitted wide, unobstructed floor plans, and they lasted longer in a fire than steel beams, given steel’s tendency to melt.

Fast-forward to the post– World War II era, when manufacturers were forsaking their old buildings in inner cities in exchange for modern plants situated closer to the new interstates. Under the banner of “urban renewal,” city planners condemned great swaths of the old warehouse and factory districts to make room for other uses. A heart-pine dealer I know tells of great piles of timbers being pushed up with bulldozers and burned amid the rubble. That’s a far cry from today, when reclaimed-wood dealers at auctions must bid aggressively for salvaged beams.

Longleaf pine isn’t the only species that gets reclaimed, of course. River-recovered cypress in the Deep South and Douglas fir in the West are also recycled. Unlike longleaf, however, these species are also widely available as virgin timber, though perhaps not in the same quality or size as their reclaimed ancestors. So why is heart pine sourced almost exclusively from salvaged material rather than from forests or plantations like other conifers? Overcutting is part of the problem, but for longleaf pine the road to regeneration has been more challenging than for other timber species.

When Europeans arrived, longleaf-pine forests covered some 90 million acres in a broad arc along the Atlantic seaboard stretching from southern Virginia to East Texas. These pine savannahs were flat, dry for most of the year, and, owing to a natural cycle of wildfire, free of heavy undergrowth. Compared to logging in mountainous regions such as the Pacific Northwest or the Appalachians, harvesting longleaf pine was like a walk in the park. There were plenty of buyers, too. Philadelphia architect Samuel Sloan wrote this in 1852: “The carpenters of the North have it in great demand for all parts of the building, especially for floors and step-boards, since it suffers comparatively little in wear, and but for its higher price they would use it exclusively. At the South, within its localities, the wood work of all buildings is constructed entirely of this material.”

Foreign as well as domestic demand was voracious; in 1912, the United States exported almost 800 million bd. ft. of longleaf pine, which was more than Douglas fir and white pine combined. But by the 1930s, less than 1% of the original longleaf forest remained.

Biologists have learned how to regenerate a longleaf ecosystem through fire management and selective cutting, but there are economic and social obstacles to making second-growth longleaf lumber available. The biggest is loss of habitat to both agriculture and the monoculture of fast-growing pine species such as loblolly. Another impediment is local resistance to the controlled burns that longleaf pines require. Nevertheless, some very passionate people are working to restore natural longleaf forests, and in a few hundred years our descendants may be working with selectively cut heart pine that rivals the old growth in quality.

From the point of view of a craftsman, heart pine can be trying, like a beautiful, high-maintenance lover. I’ve used it for cabinets, millwork, and flooring, resulting in what you might call a love/hate relationship. Unless the material has been denailed and resawn, it requires lots of dirty work to remove the grime of yesteryear. The amber resin is fragrant but exasperating because it bogs down sawblades and mucks up abrasives. Splinters are wicked, and there’s always the threat of a hidden cut nail circa 1904 putting a fat nick in your planer knives circa 2018.

The softness of heart pine can be a liability as well, which I learned the hard way. I had laid the floor of a large room with a frightfully expensive grade of heart pine called “crown” by the manufacturer. That meant it was mostly dense vertical grain with just a few small knots. Instead of sanding the floor at the end of the job, I had it sanded and then covered with rosin paper while other finish work was completed. During my absence one day, a large refrigerator was delivered and rolled across the room. When the rosin paper was removed at the end of the project, we saw a perfect pair of parallel V-grooves traversing the middle of the floor. To make matters worse, the heart pine had darkened a few shades in the weeks since it had been laid. I was able to sand out the wheel marks, but now the sanded area appeared lighter than the rest of the floor—the dreaded “Coppertone” effect. The client was not reassured when I said, “It will all blend in eventually,” so I had to concoct a custom stain and then airbrush the offending area to blend it in.

So what’s the payoff for putting up with heart pine’s idiosyncrasies? Looks, pure and simple. All is forgiven when the first coat of varnish flows off my brush and the ancient grain springs to life. With the distilled sunlight of a thousand Georgia mornings beaming forth from that whiskey-hued surface, all I can do is stare. 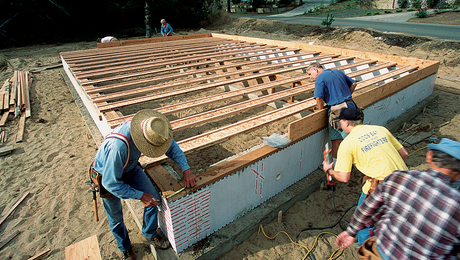