This project by Aline Architecture embodies the spirit of the Arts and Crafts movement, which emphasized artistry and functionality.

The Craftsman style of architecture (1905–1930) was a response to mounting concern over the loss of traditional building skills in favor of factory mass production. Born of the Arts and Crafts movement, it refocused attention on high-quality materials and fine craftsmanship. Key identifying features of the style include: low-pitched, sometimes-hipped roofs; wide, unenclosed eave overhangs; false beams or braces under gables; extended rafter tails; both symmetrical and asymmetrical facades; full- or partial-width porches; exposed structural members; and wood joinery. Additionally, Craftsman homes are typically one- to one-and-a-half-stories tall. 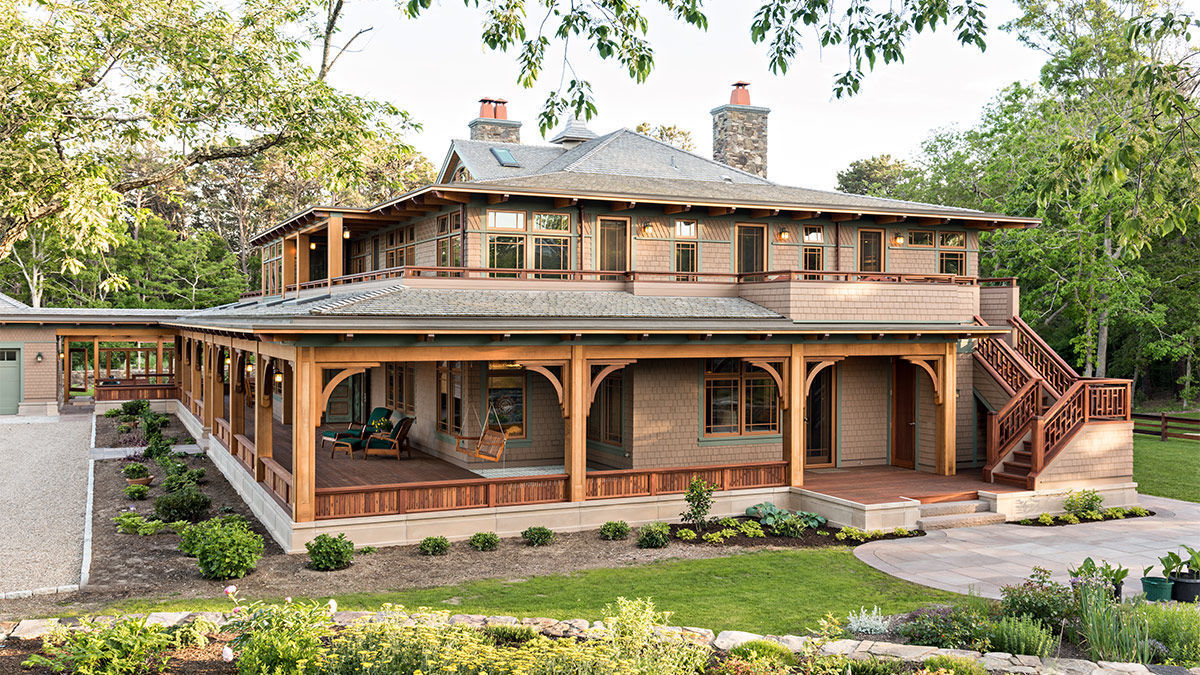 This newly completed house by Joy Cuming, principal of Aline Architecture, epitomizes both the spirit of the movement and the character of the style. Using skilled craftspeople every step of the way, the Aline team designed a showstopper of a house on a 2.68-acre site overlooking Cape Cod’s Pleasant Bay.

Modeled after New England’s post-and-beam barns, the central structure was built using 200-ft. hemlock trees felled on the property the clients were leaving—it was a way to bring a bit of their past with them. “That’s central to the uniqueness of this building and the idea behind the Craftsman style,” notes Cuming, adding that several poplar trees were also felled and used for a good portion of the interior trim. 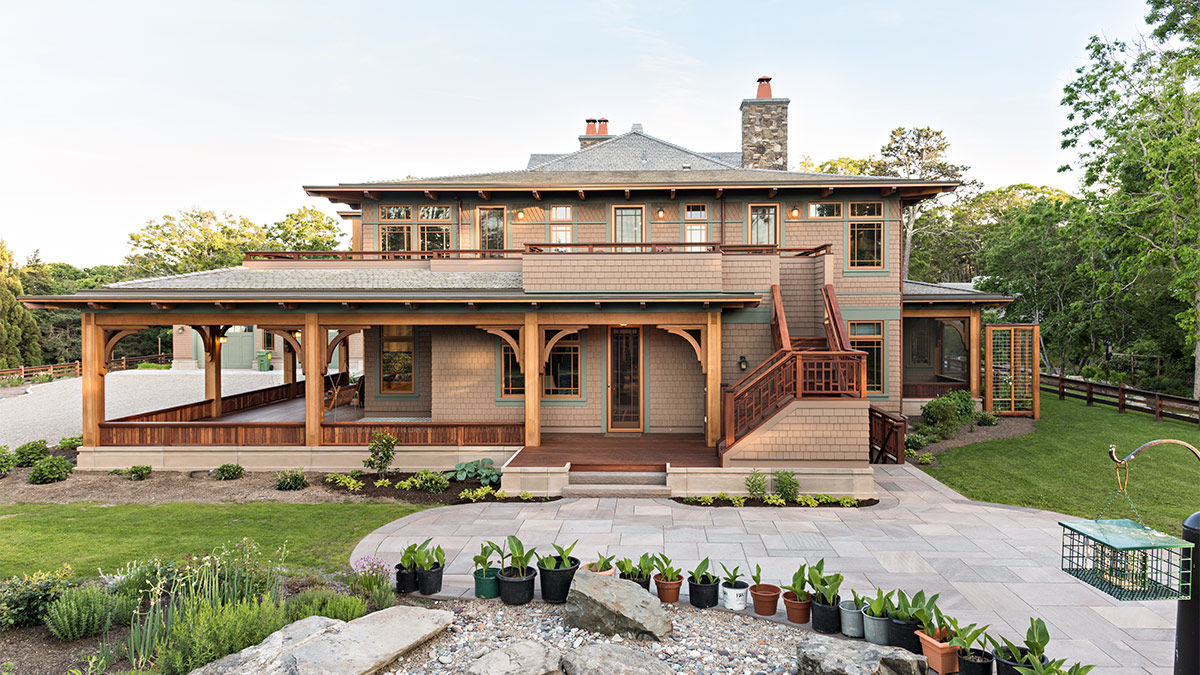 Designing a large timber-frame structure that would meet code requirements for static and dynamic loads was a hurdle—the long spans necessitated engineering ingenuity. “You can see from the liveliness of the form that there were some interesting conjunctions where the main roof hits the dormers,” says Cuming, adding that she wanted a thin, folded plate rather than a structural member on the valley, which was the primary challenge. At the dormer-roof intersection, they used SIP panels; on other sections, 7 in. of cork were spec’d to meet energy requirements. 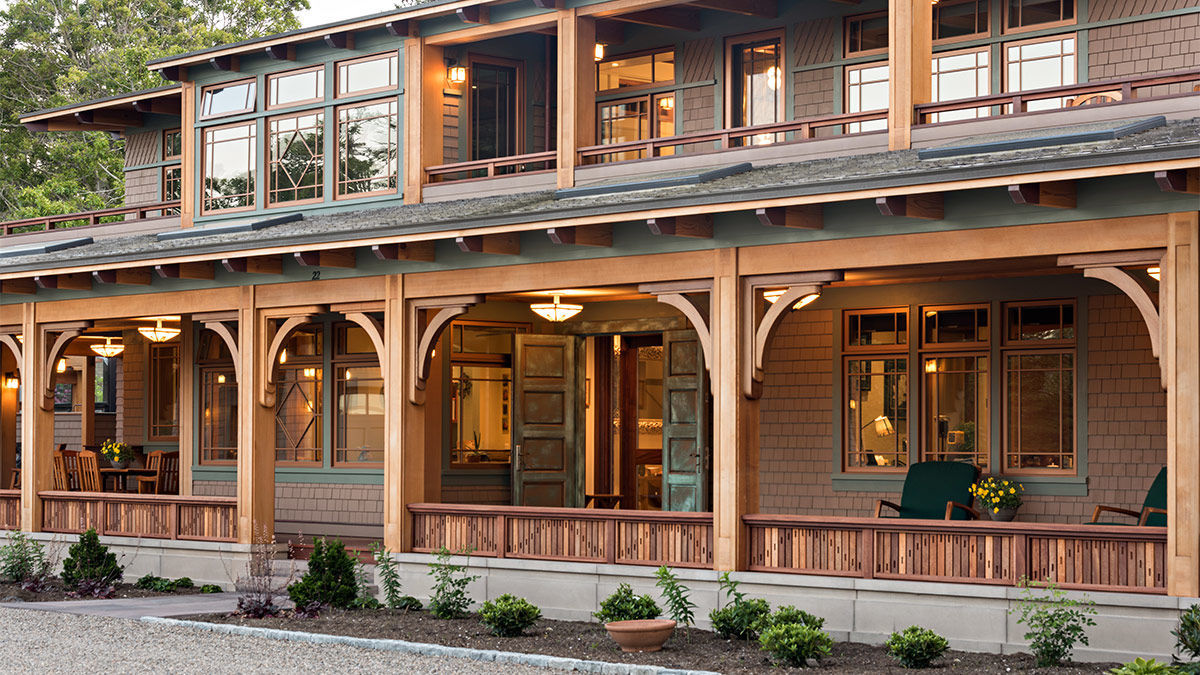 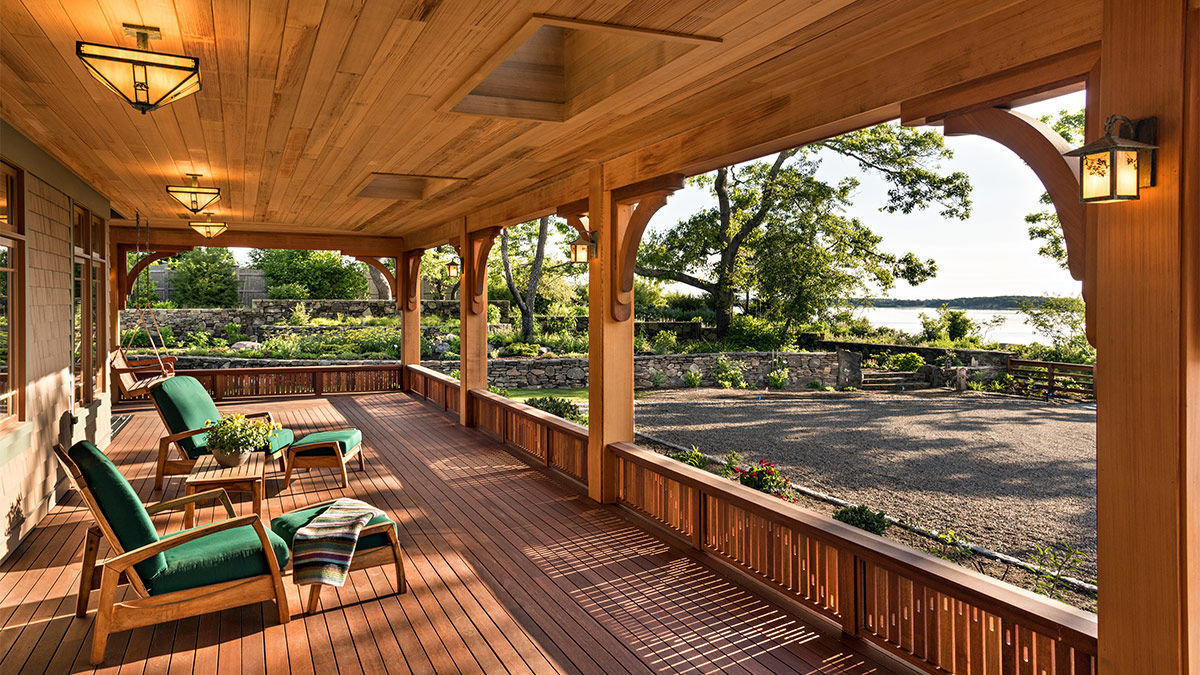 The two-story house is wrapped with a 10-ft.-deep open veranda with wide overhangs, typical of the Craftsman style. To enable light to penetrate the veranda, Cuming included grates in the floors of the above balconies to function as skylights. The second-floor exterior features Line-X balcony roofs with Alaskan yellow cedar shingles. Decorative brackets on the veranda give the whole assembly a rhythmic feel. Because the client likes curves, Cuming added a wave pattern to the vertical cedar rail boards; when the sun shines through them, the floor is swathed in dappled light. 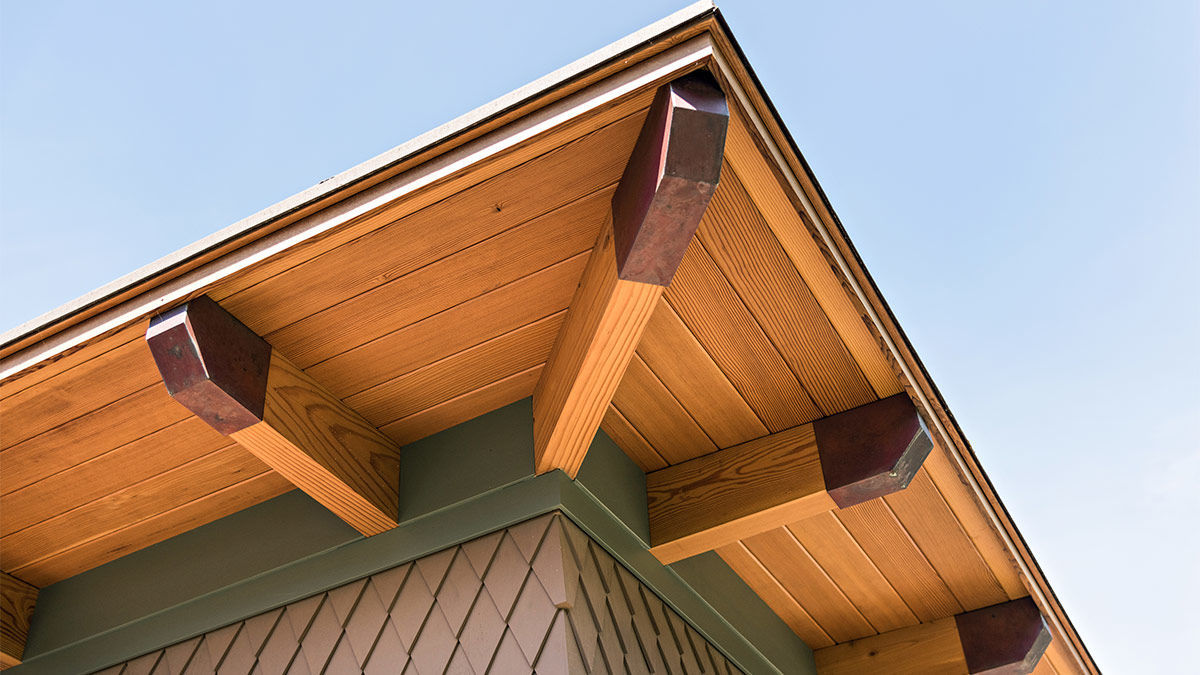 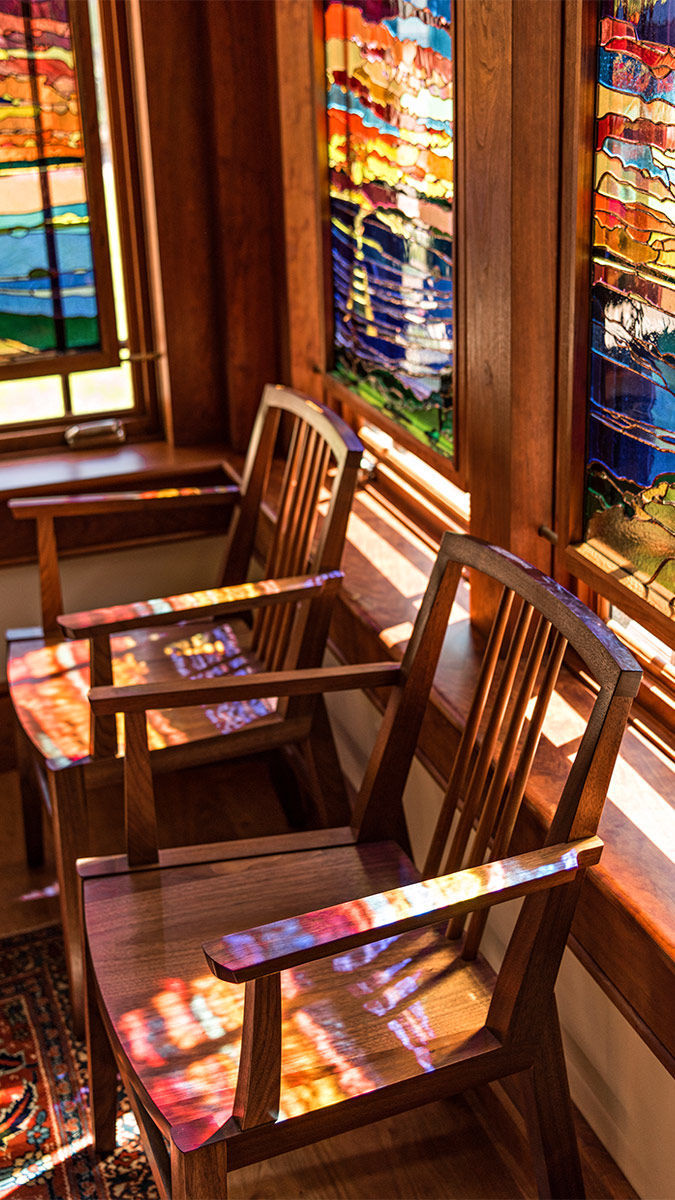 The strong Craftsman-style horizontal lines that Cuming felt suited the site so well are reinforced by bands of decorative shingling and trim. A row of transom windows above the upper-floor casement windows furthers the effect. Copper-clad as well as stained-glass and mullion-patterned windows add another layer of detailed craftsmanship. Cuming also used copper for the handcrafted boots on the exposed rafter tails. A pigmented precast concrete plinth circumnavigates the house, and is meant to be symbolic of the early stone plinths on grand old houses built in the same tradition. 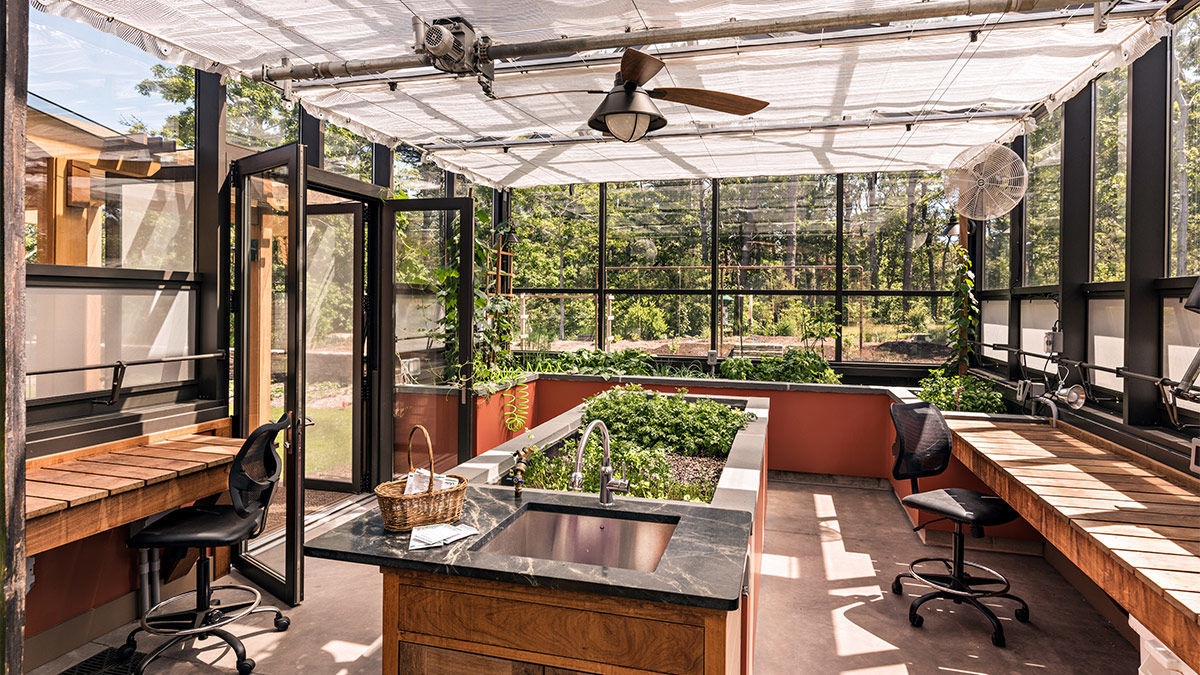 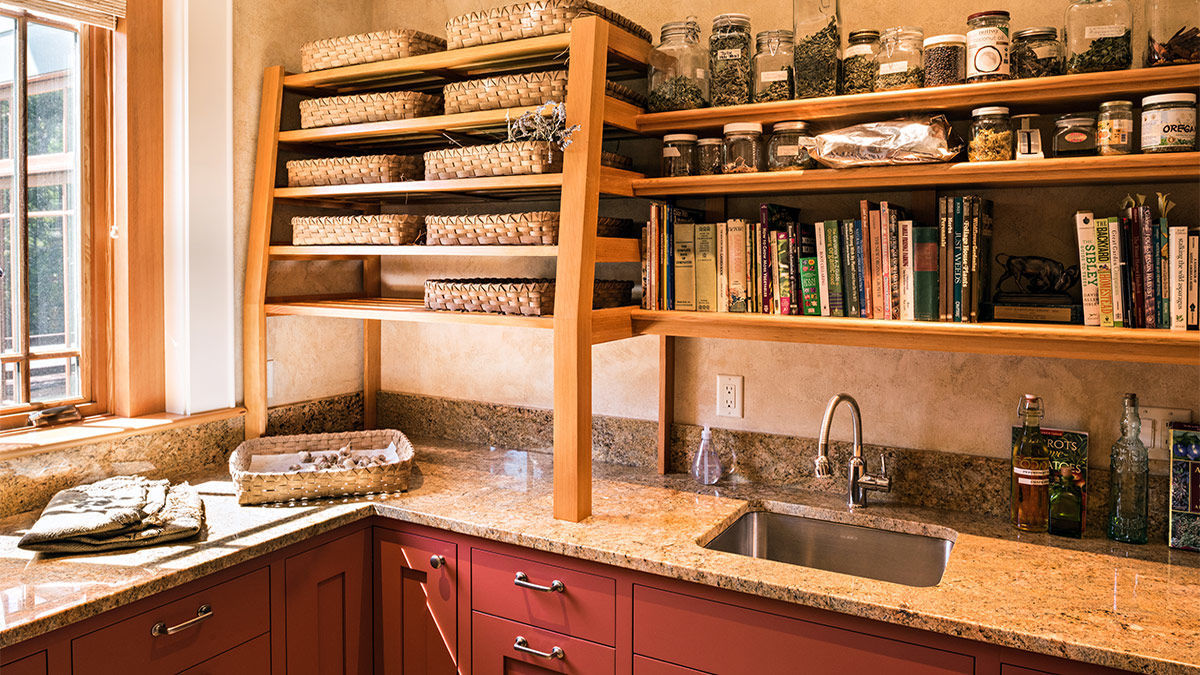 Because the clients grow their own food, a greenhouse was central to the design. “The property is like a working farm,” notes Cuming. “They have laid out the house to maximize food production.” There is also an herb pantry. Both the greenhouse and the pantry are another expression of the philosophy behind the Arts and Crafts movement, which stressed the artisanal over the mass-produced. 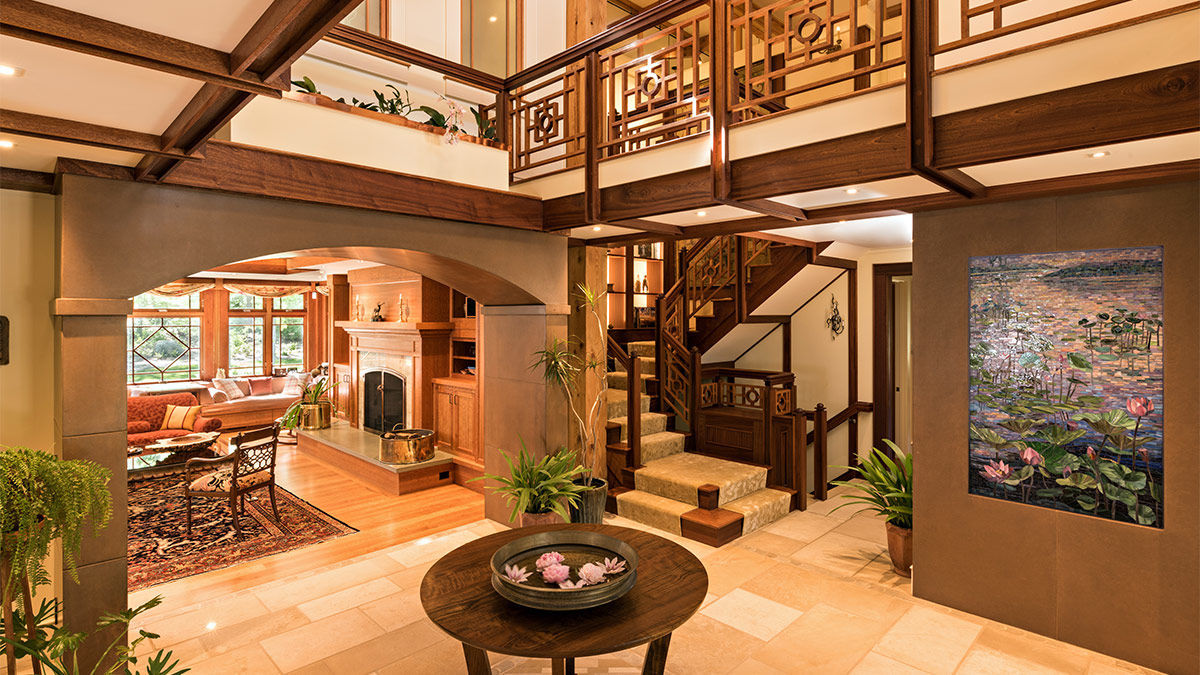 Two main circulation paths run north–south and east–west, dividing the house into four quadrants. The central space around which the house is organized was designed to feel like an outdoor courtyard. The effect was achieved using a custom-built precast concrete arch in combination with upper balconies, arched dormers, interior windows, and etched-glass doors near the entry. The stone floor and clerestory daylighting also work toward that end. 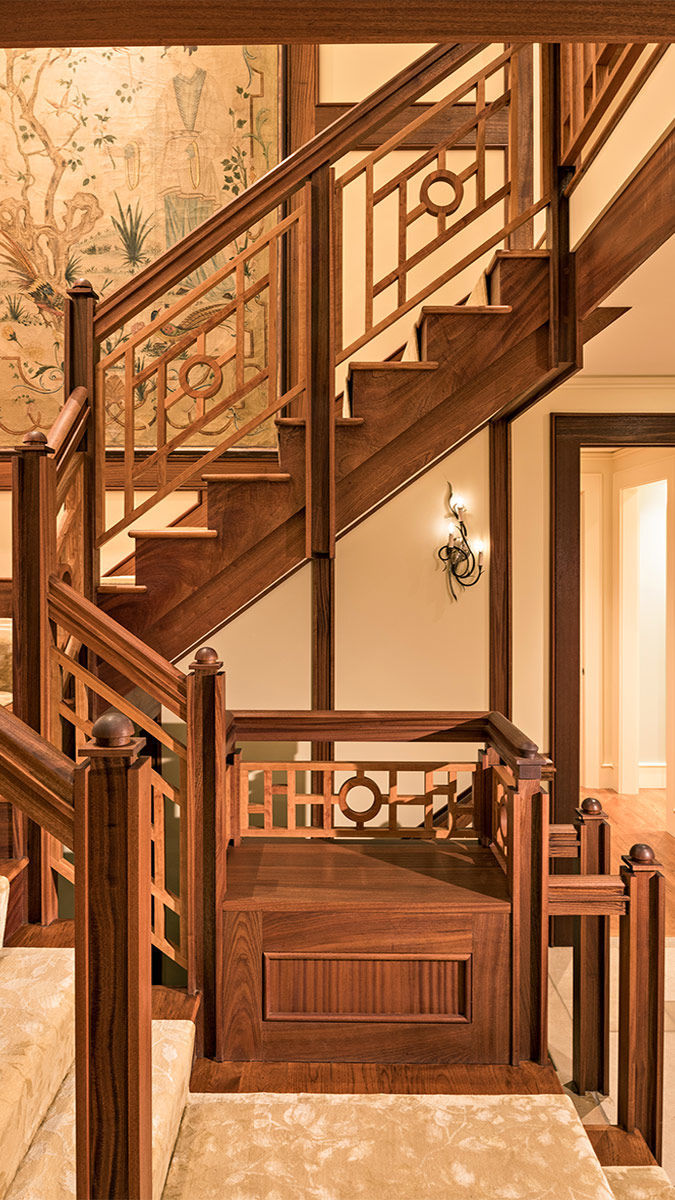 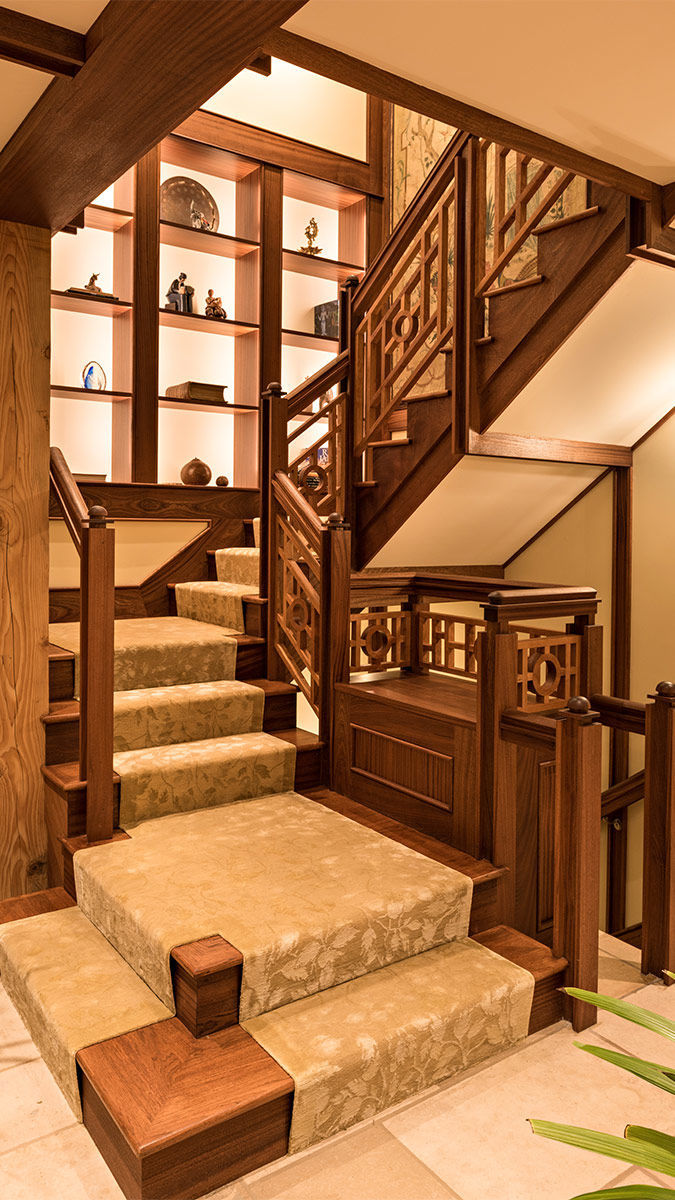 The cherry and mahogany Craftsman-style staircase was to be more than functional. Cuming intended it to be a place to pause and take in all of the architectural details as well as views of the space below and the balcony above. “I wanted to make the eye go up and around and across and never really rest,” she explains. The staircase was also used to showcase art objects including a cherished Chinese painting—all of the trimwork was designed around it. Antique books are housed on the landing in a built-in bookcase. The circles in each bay of the rail were a detail meant, once again, to soften the lines.

To heighten the beauty of the exposed structure, Cuming designed a horizontal soffit around the entire second floor, and above it, at the raked ceiling—between the rafters and the top of the soffit—she inserted mirrors. The idea was for the structure to reflect back on itself, creating a sense of the entire roof seen from within. Because the clients requested that all fasteners be concealed, precision workmanship was needed to get the look of mortise-and-tenon joints. 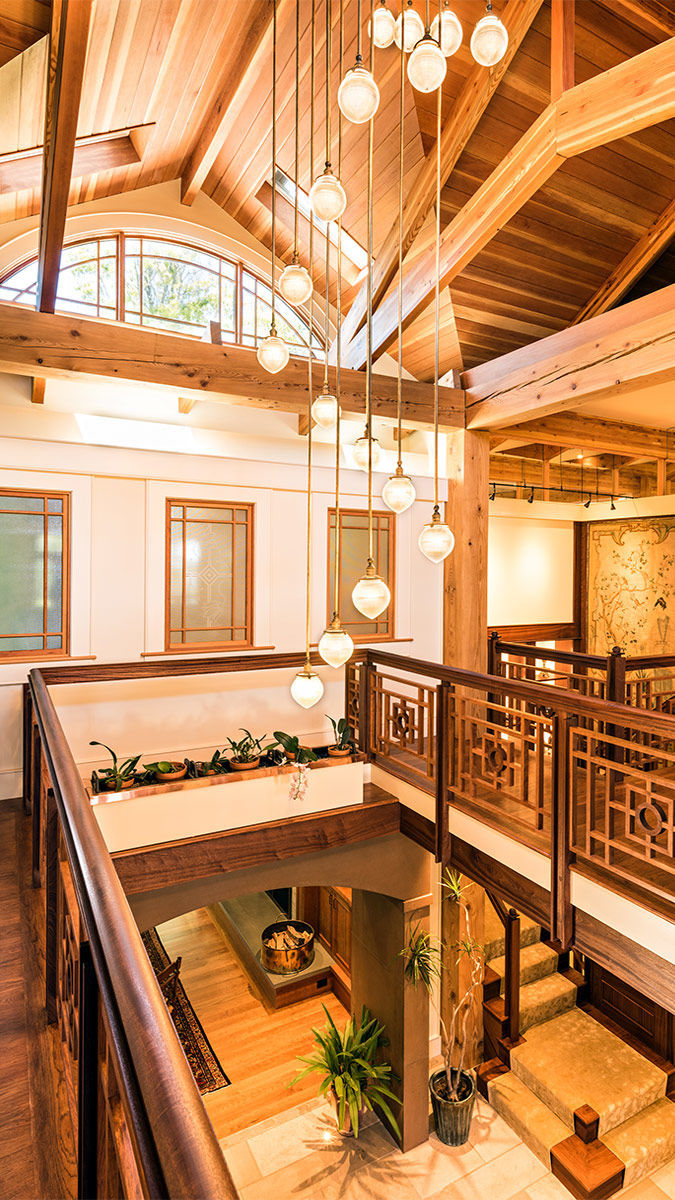 Perhaps most notable among the custom-designed lighting fixtures is the one above the center hall. It was made from prismatic globes purchased from an antiques dealer—such lights were commonly used in dentists’ offices in the 1920s to refract light. 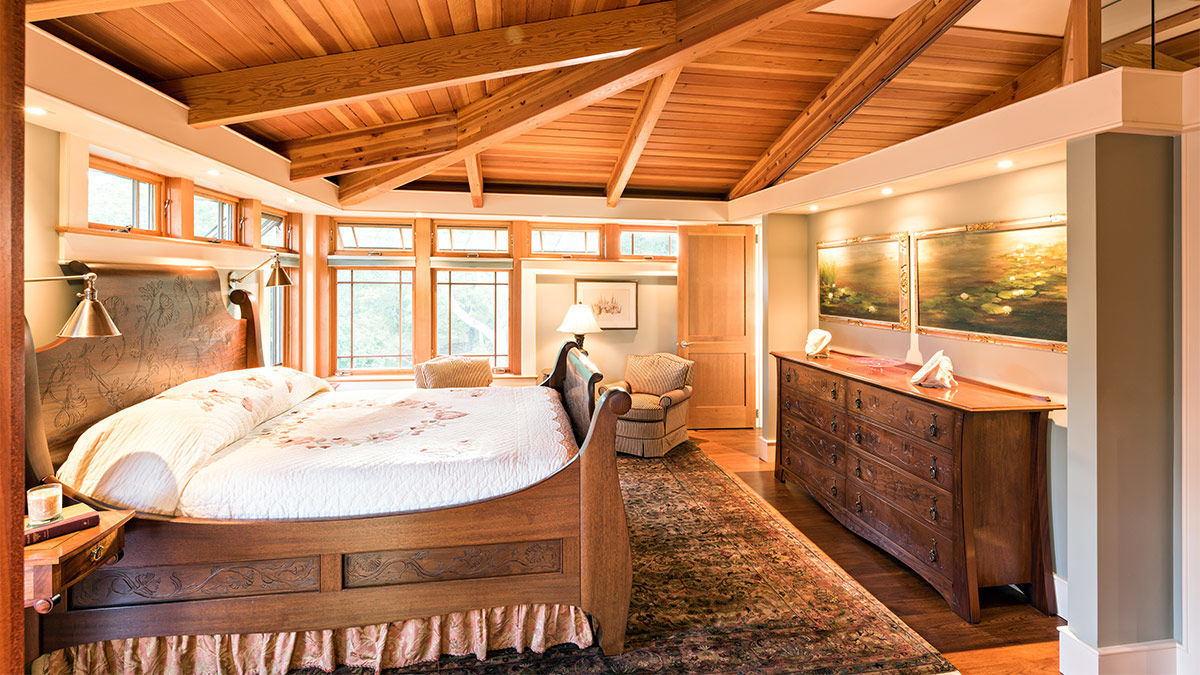 The clients had strong programmatic requirements that included aging-in-place components. “Access and ease of movement through the spaces were critical, as were places to perch and rest throughout the house,” says Cuming, pointing to the many built-ins and a small cloistered area. “At every turn we thought about ways to make people comfortable.”