During a recent scroll through LinkedIn, I came across a bathroom-remodel project by Wilson Kelsey Design. The way John Kelsey and Sally Wilson detailed the design process and illustrated it with sketches and renderings put me in mind to invite John to contribute a guest blog post, which is what follows.

As is typical of most older New England homes, the existing kitchen of this 1920s Colonial, located on Boston’s South Shore, was small and tucked away in a back corner. With an awkward mid-1970s addition on one side of the kitchen and load-bearing or exterior walls around the rest of the room, we had limited options for expansion. Yet, that was exactly what the client wanted. 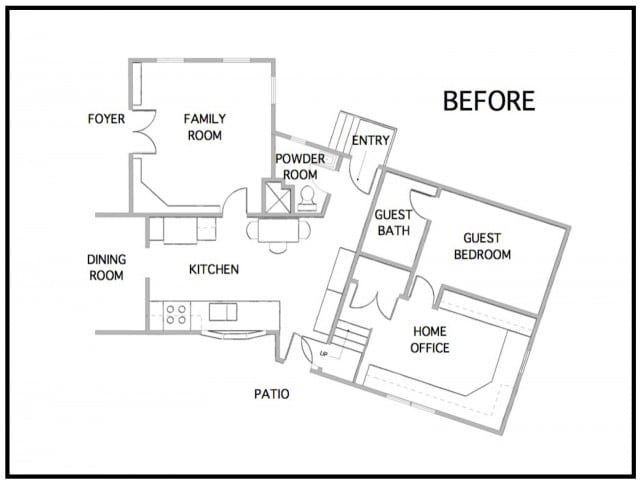 Let’s take a look at the design challenges we faced:

We always start a project by asking, “Where’s the pain? Where does it hurt the most? What are your biggest problems and fears?” Some of our clients’ issues and concerns may be familiar to you: 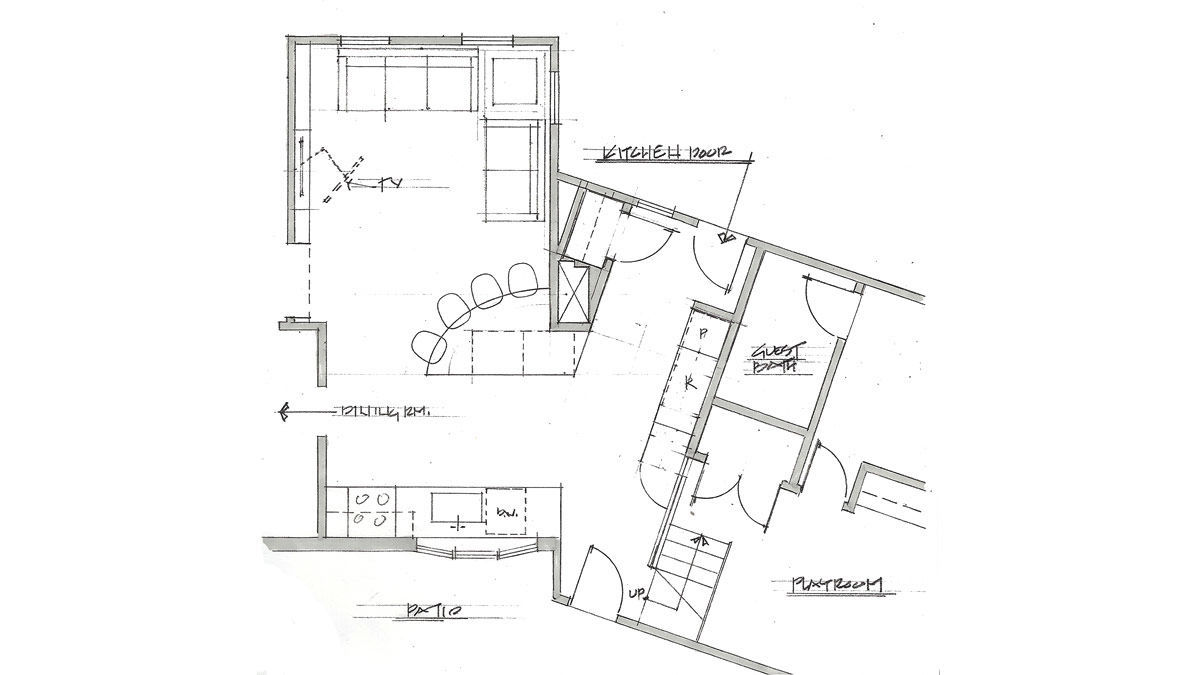 With our preliminary plans we try to solve functionality problems first. This establishes the basic design intent. For this project, we brought a contractor on board early in the design process to help evaluate the costs of various design concepts. After budget reviews, we agreed to do three things:

We went through multiple iterations of plans to reach the final solution. In our initial schemes, we tried to work around the chimney and the door between the kitchen and underused formal dining room. In this early scheme, we added a closet/storage by the kitchen door and created a funky island that engaged the old chimney. But the lousy circulation remained unresolved and the kitchen was too spread out. 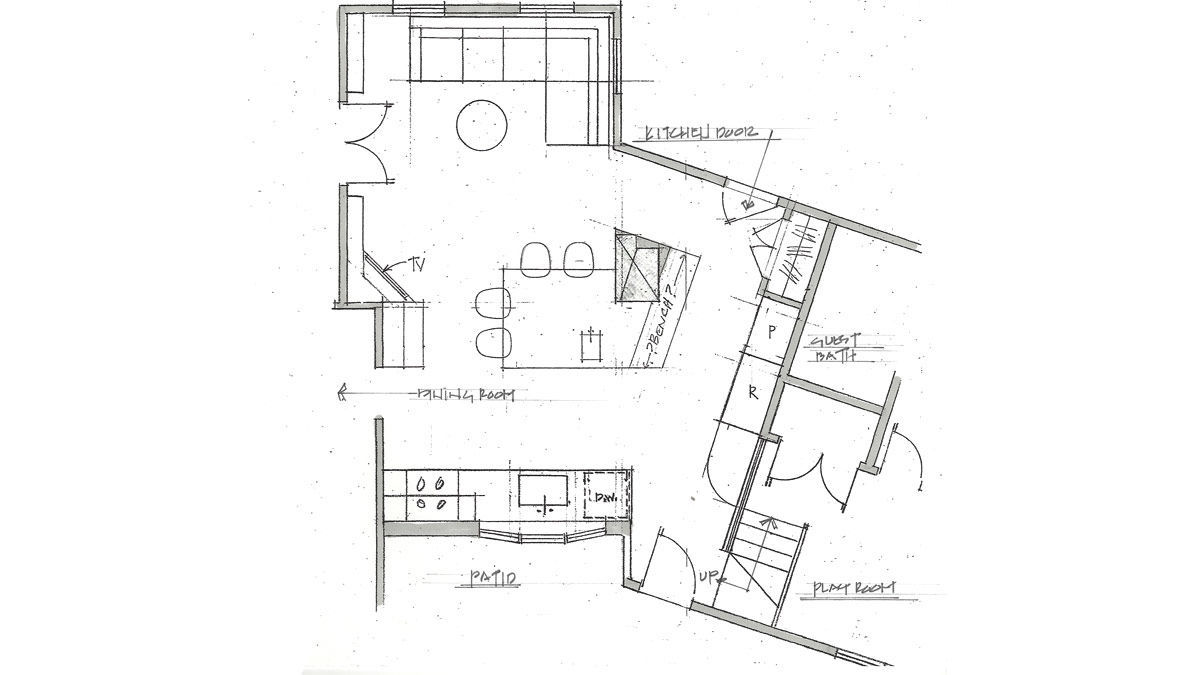 Here you can see how we “cheated” the island a little closer to the rest of the kitchen, and brought the kitchen to the island with a prep sink. By reworking the kitchen door, we were able to move the closet and create circulation around the entire island. It was better, but not good enough. We still had circulation coming through the work triangle in the kitchen, and the island still felt like it was in no man’s land, plus the chimney just looked weird in the middle of all that open space. 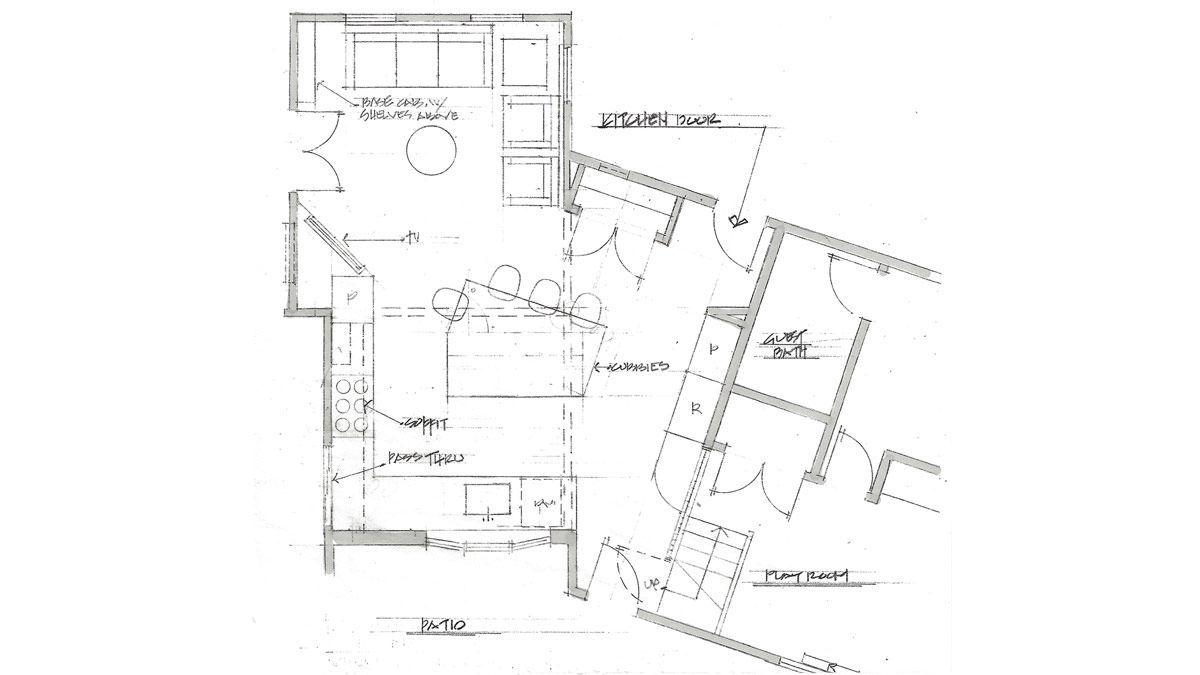 At this point, we knew we had to close the opening between the kitchen and the dining room. We asked the contractor for an estimate to remove the entire chimney—roof to basement. While we were waiting for his quote, the client asked us to do a scheme without the chimney so she could visualize the difference. You can see that the door between the kitchen and dining room has been eliminated. I added a pass-through between the two rooms. (At some point, you have to trust when the client repeatedly insists, “I only serve dinner there four times a year on holidays.”) She took one look at the drawing and said, “I’ll find the money to eliminate the chimney!” With some minor tweaks, this became the final plan. Fortunately, the chimney removal didn’t break the bank. 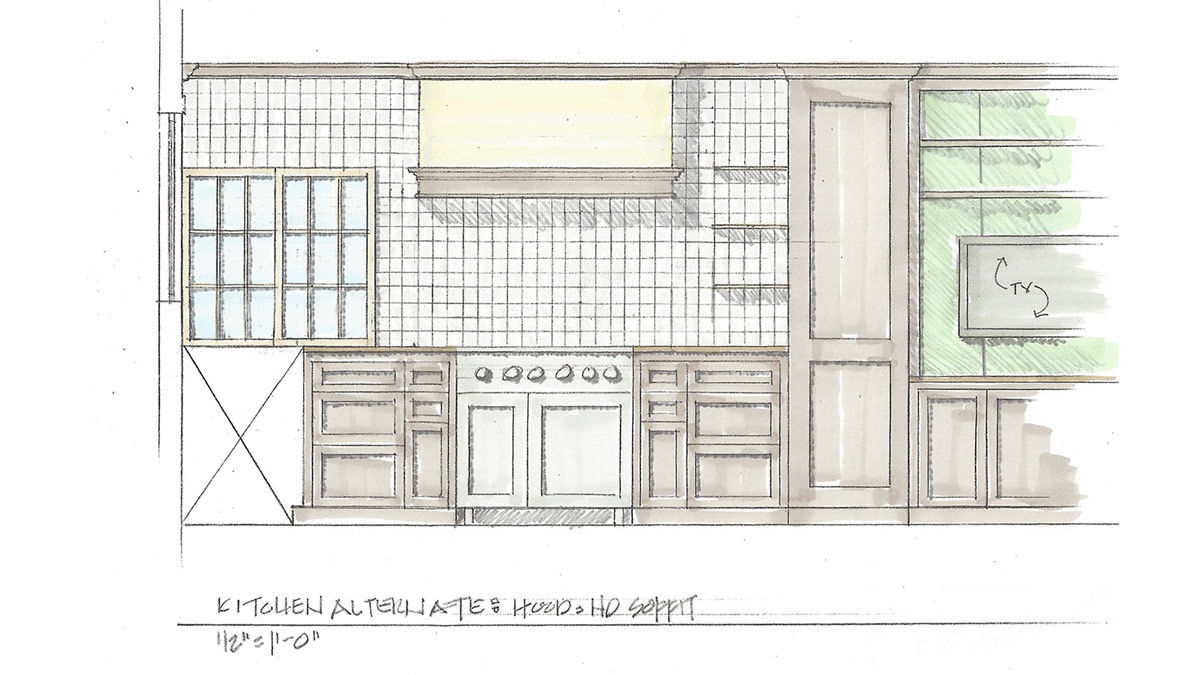 We had two major areas of concern. First, the focal point of the new kitchen—we had to get the oven wall with the pass-through right. The second was the opening between the kitchen and the kids’ new playroom. With the kitchen’s low ceiling, we had to design an opening that was transparent. Having done a major inventory of our client’s plates, glassware, silverware, pots, pans, and pantry supplies, we knew that the two floor-to-ceiling pantries and the base cabinets would accommodate all storage needs. 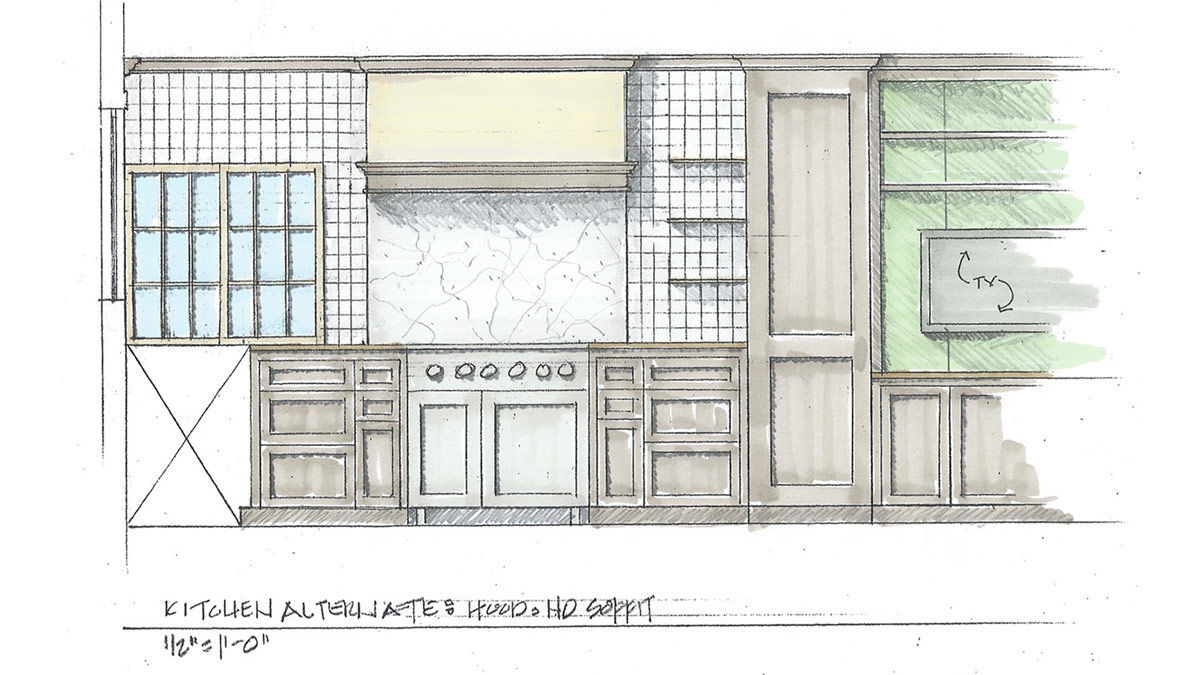 Now it was time for the oven wall. In our first two schemes, we used a conventional exhaust vent over the range. And we played with the idea of tile versus stone backsplashes. Because of the low ceiling height, we kept bumping into issues routing the vent stack through the house to the exterior. It got complicated and expensive. 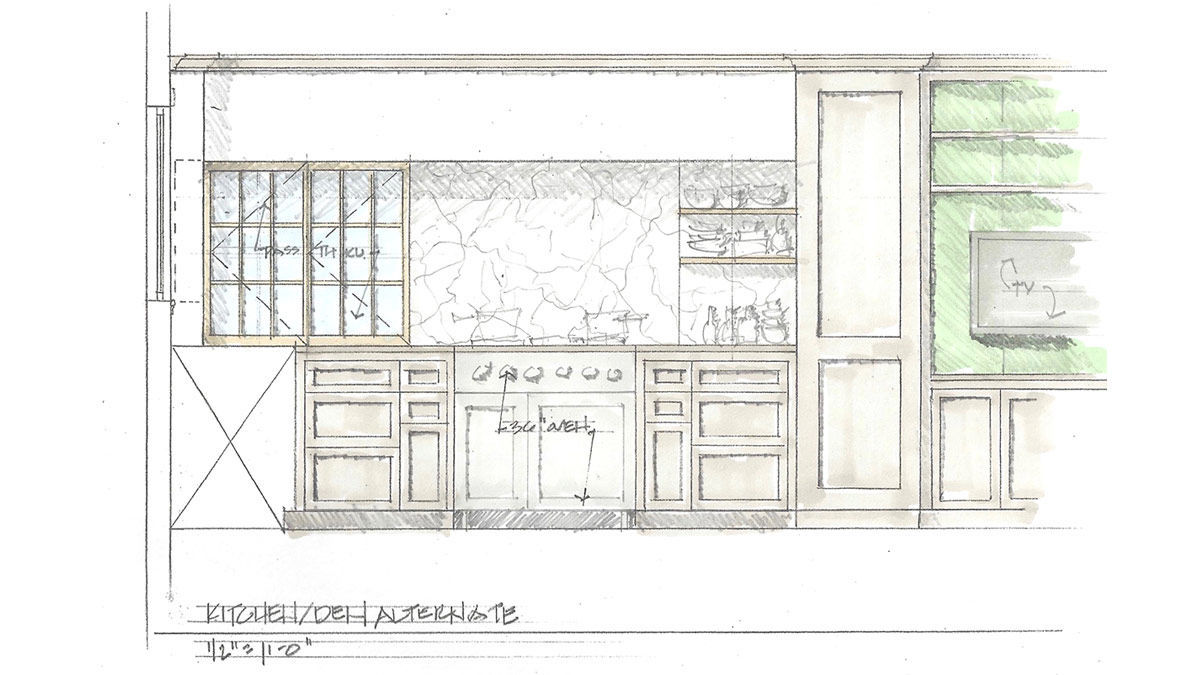 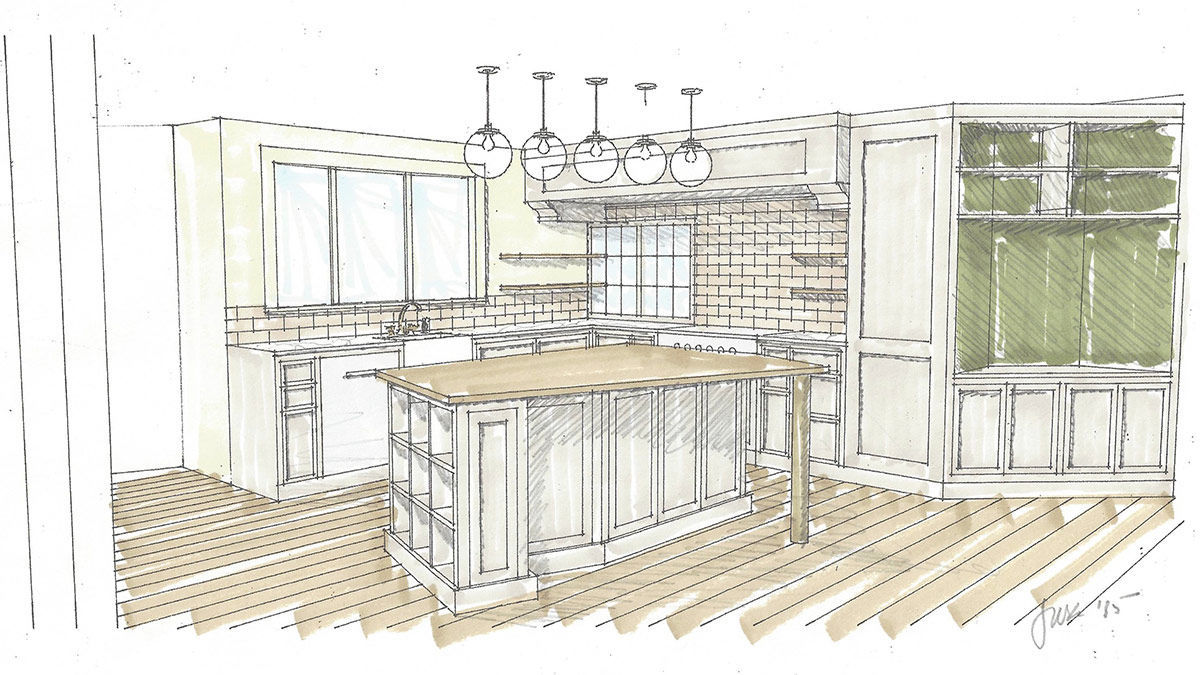 I finally found a ceiling-mounted exhaust that vented out the side. I designed a soffit above the oven and adjacent counters, which solved the routing problem. 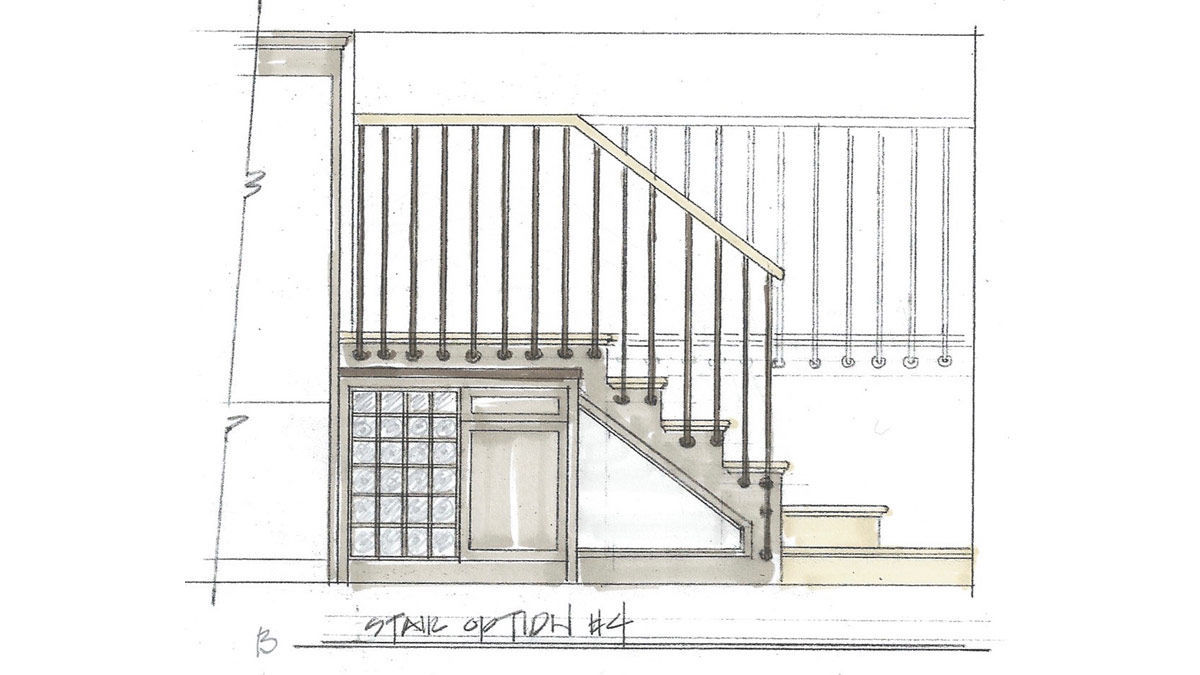 For the opening between the kitchen and the new playroom, we took clues from the wrought-iron railings on the exterior of the house. I really wanted to hang the balusters off the side of the steps, but it was cost-prohibitive. 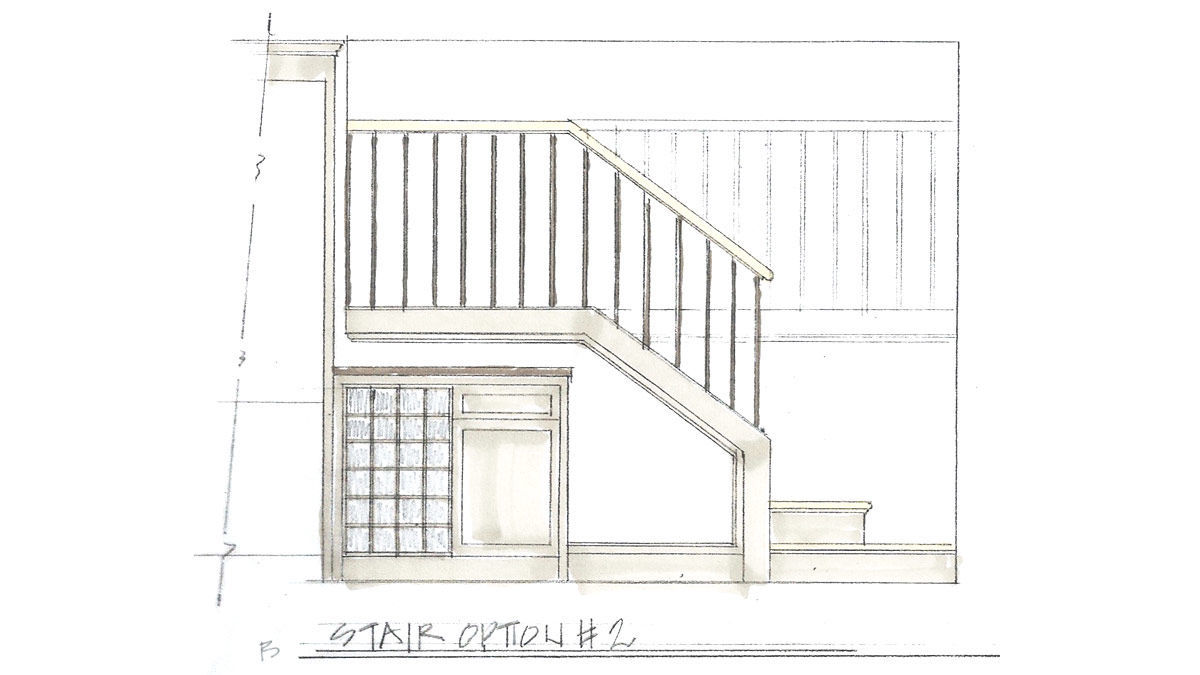 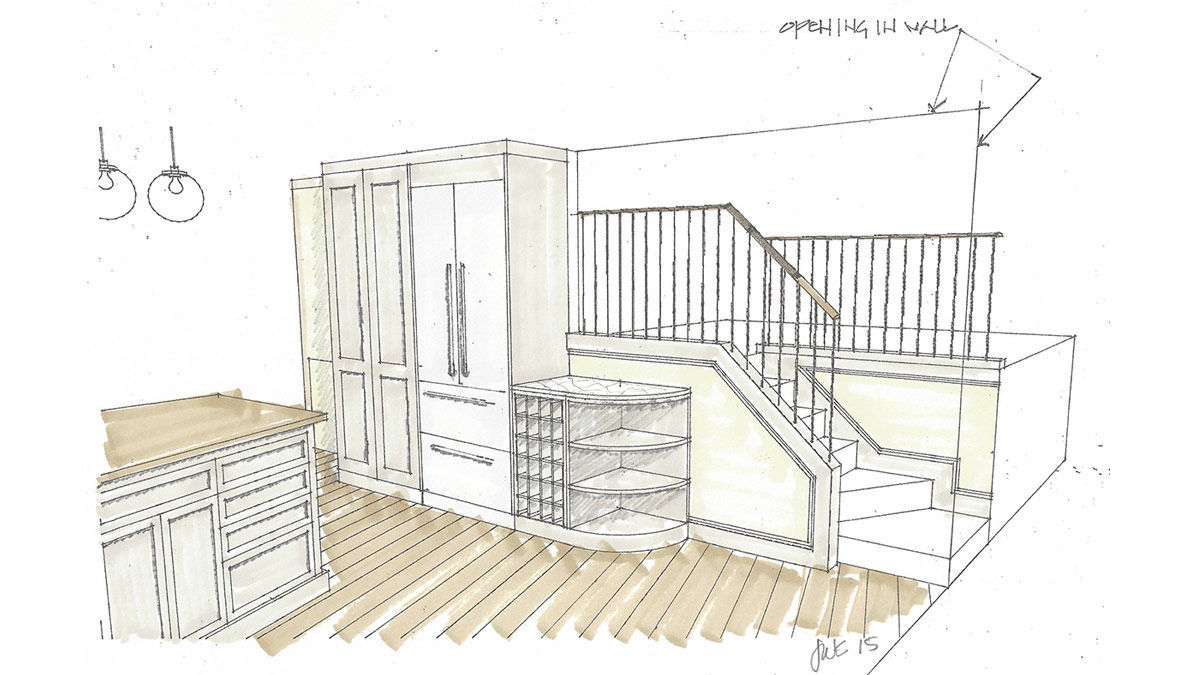 The final solution enabled us to keep the existing steps and risers—we designed a simple curb to which the balusters were attached. 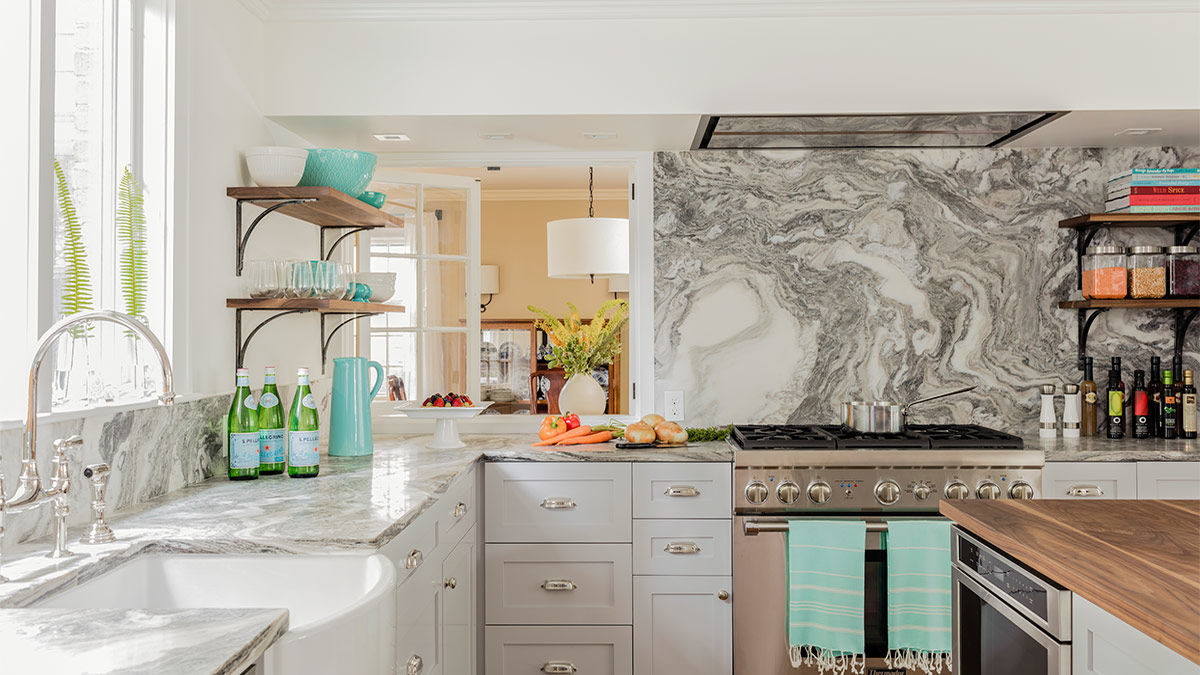 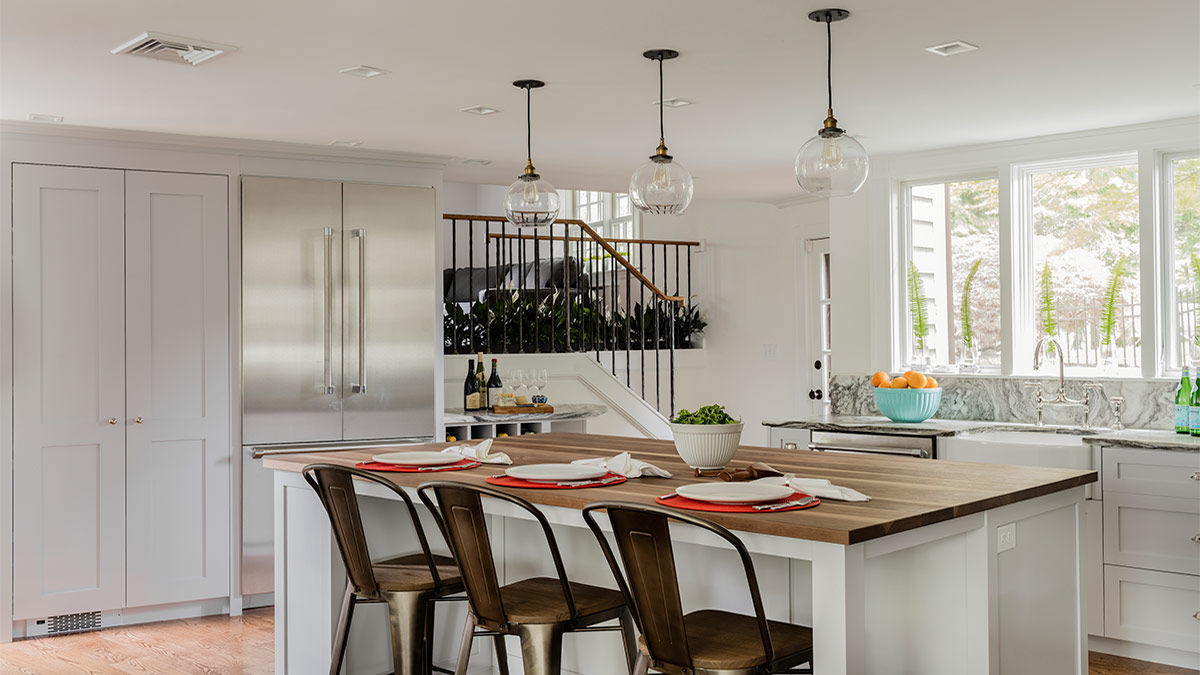 With those two key decisions made, the rest of the design fell into place. Shaker-style cabinet doors, simple pulls, dark-stained oak floors, and cool accent lighting over the walnut-topped island were among the finishing touches.

Watch remodeler Josh Oduin demonstrate how to embed premade corners and banding in thinset to waterproof a new shower before tiling.