Out of the Box

“The kitchen is the only room left where we really talk to each other. And food is the perfect vehicle for showing love and affection.” —Johnny Grey

Waxing poetic on “soft geometry” and “humane ergonomics,” Johnny Grey lulls me into a dreamy state. (His English accent helps.) The seasoned designer has had a long career spent revolutionizing the kitchen. A scroll through his portfolio reveals a litany of projects, each unlike any other. Their character comes from the use of biomorphic shapes, unexpected juxtapositions, unabashed color combinations, and museum-quality craftsmanship. All told, they have soul, which is why I love them. 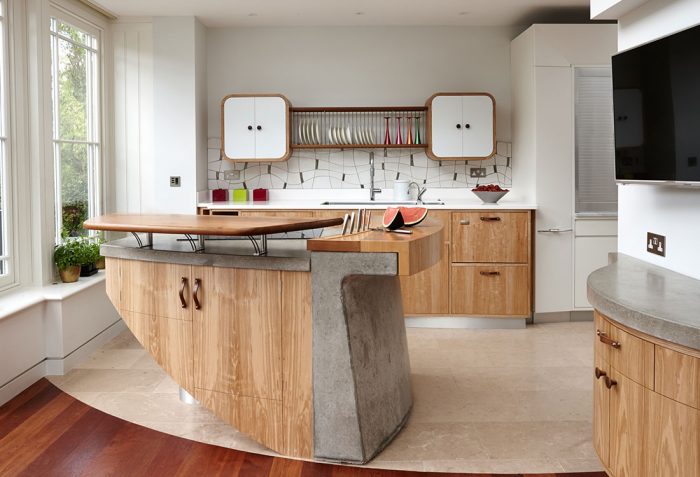 Arguably, it’s his approach to kitchen islands—though he prefers to think of them as a series of working tables—that has earned him the reputation of being a disrupter. “I design kitchens around eye contact, which is why I often make islands long and thin,” he says, noting that the idea came to him while designing a kitchen comprising two rooms that had been tied together, forming something of a corridor. “The island is so thin it’s hilarious,” Grey muses. “I wouldn’t have thought to do that even 10 years ago.” But its shape is conducive to “sequenced activities,” as Grey calls them, and it promotes the intimate human connection he’s always after. 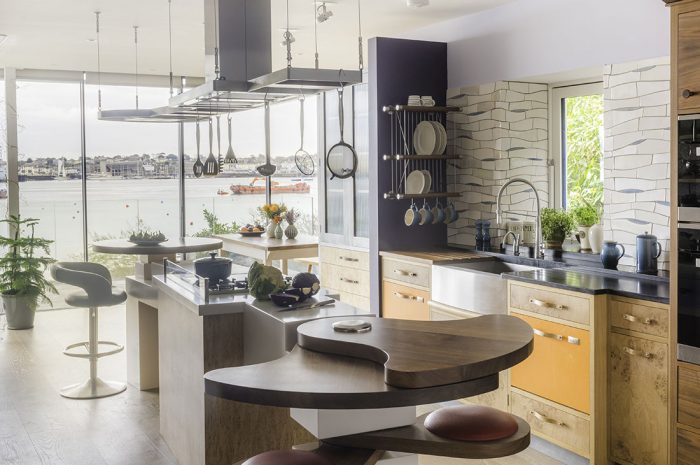 In the kitchen pictured here, the narrow stretch of island is off-centered and a bit contorted—the idea being that the unit is comfortable for many people to be sitting, working, and walking around at one time. Also key to the design is the open space below, which allows for a wheelchair. Grey is not one to load cabinets into the base of an island, nor does he appreciate the traditional island’s deep rectangular shape, which he feels interrupts a space, making it uncomfortable. “Put any blockage in the middle of a room,” he explains, “if it has sharp corners, it slightly triggers the brain’s fight-or-flight mechanism. If you take that corner away and introduce a soft shape, the brain isn’t activated, rather it glides around.” This underlies his notion of soft geometry. 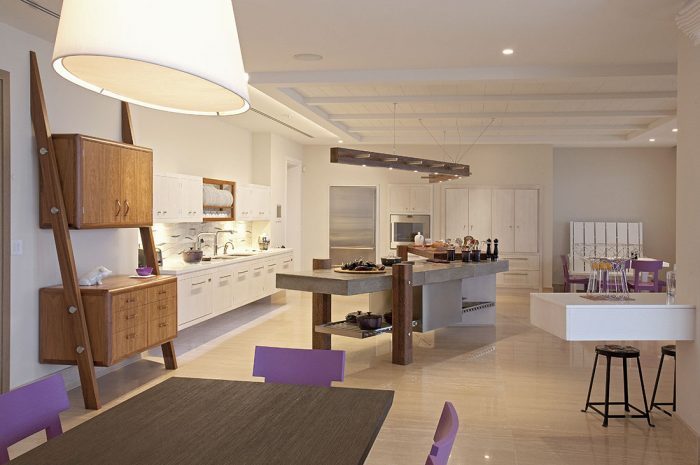 Grey’s islands are representative of what he calls his longest-standing idea: Furniture is a planning device that is in tune with people’s understanding of how to furnish a space, i.e. the art of assembling and arranging things. “I use freestanding furniture wherever possible,” he says. “That, plus humane ergonomics. I’ve gone one step further to turn the room into a series of components. This is how I break down kitchen design into a series of working tables. I like the idea of treading gently and letting light wash through the middle of the room. I want people to move beyond the idea of center islands.”

Recently, Grey has turned his eye toward multigenerational kitchens, a niche interest born of his new position as design ambassador for the National Innovation Center for Aging. His efforts in this realm include de-stigmatizing universal design. “The main thing for me is that it not look like a kitchen for somebody who has a disability,” he says. 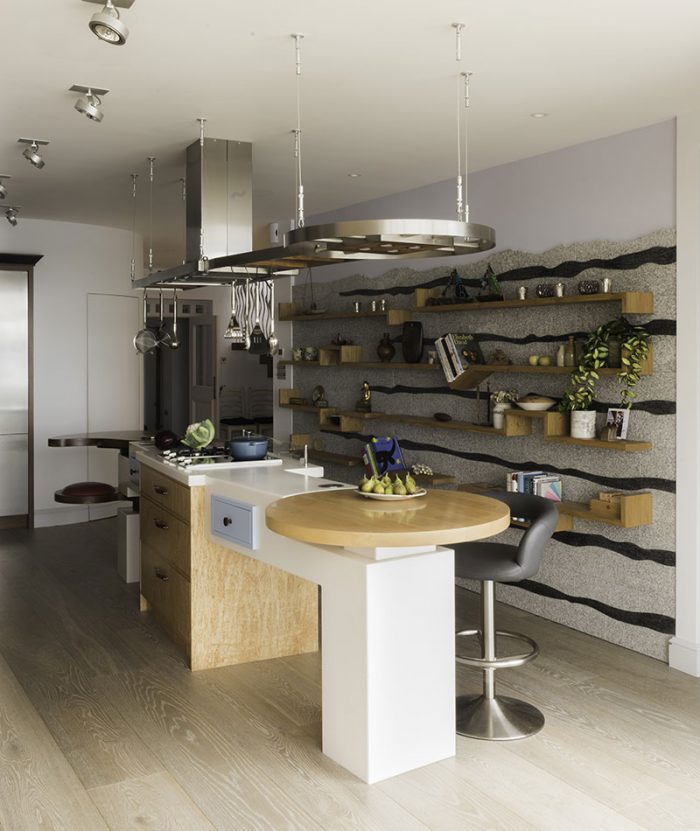 For the project pictured here, Grey was working with a retired couple living near their grandchildren. Their kitchen needed to support aging in place and regularly stretch to accommodate the whole family. In addition to the island setup—which includes built-in point-source lighting—age-related design elements include a raised-height, drawer-style dishwasher; a sink whose height is set in accordance with the height of the clients’ flexed elbows; and a round end table that can rise and fall to different heights. Looking toward the future of multigenerational kitchen design, Grey sees freestanding cordless appliances playing a big role. He also imagines further advances in technology to support safety.

Speaking about his out-of-the box materials and colors, Grey says: “I’m a maximalist rather than a minimalist. The idea of reducing everything to the same material brings not calmness but dullness. The pleasure that people get from different colors, textures, and materials affects their mood. I’m interested in how you can cheer people up when they come into the kitchen after a long day.” 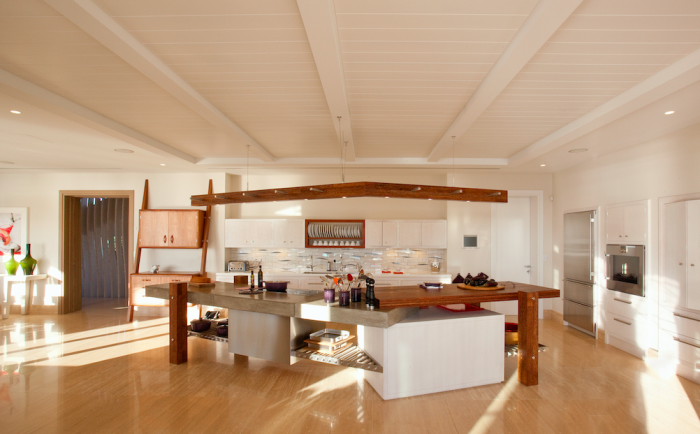 In sum, Grey says his kitchens are a response to “an intelligent inner core” that he believes is innate in people. Tapping into that, he says, “brings rich psychological content, history, and culture to a space. It establishes a story and a bit of soul.” 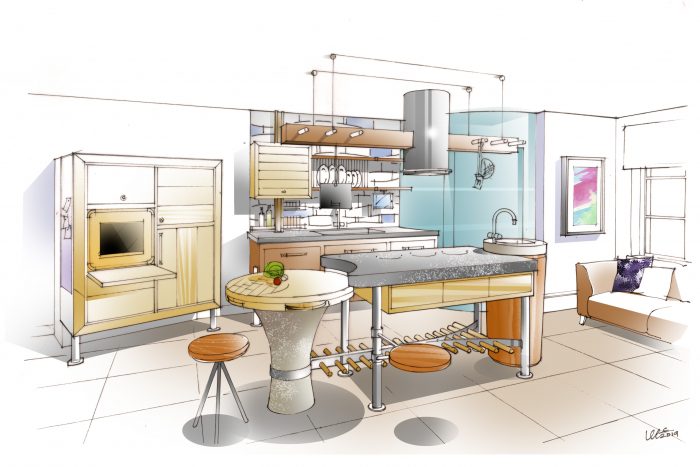 Josh Oduin shows off the durable, zero-maintenance siding materials he used on his personal cabin project in Leavenworth, Wash.