What Are Passive Houses? 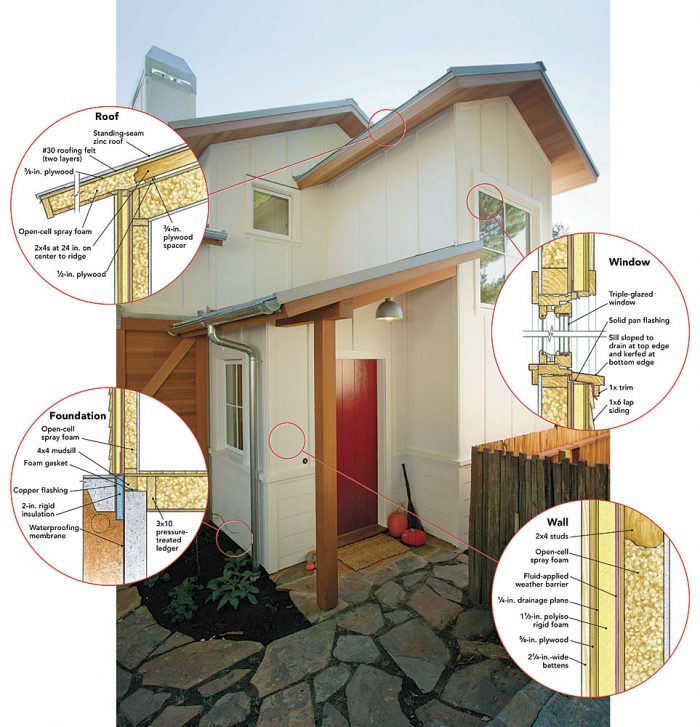 Some passive solar designs didn’t work as well as their builders hoped they would. Gradually, designers found other ways of making houses more comfortable even as they used increasingly smaller amounts of energy for heating and cooling. Building materials as well as technique improved.

In modern usage, passive now means “Passive House” after a set of specific performance characteristics that were first developed in Germany. Passive House is something of a misnomer. These houses are not literally “passive,” because they include a variety of active mechanical systems for heating, cooling, and ventilation. But what, exactly, are they?

Although not quite as rigorous as the Living Building Challenge (a story for another day), Passive House certification is one of the more difficult performance thresholds builders can hope to cross, especially if you live in a cold climate. Certification is energy focused, not lifestyle focused, and it can be rigorous.

The two organizations are completely separate and use different sets of rules. And while the German organization formalized the requirements, the concepts were developed much earlier by pioneers in the U.S. and Canada. The Saskatchewan Conservation House, built in 1977, and a superinsulated house built in Pepperell, Massachusetts, were two early examples of this important evolution in building design.

But it was a German physicist named Dr. Wolfgang Feist who organized these ideas and in 1990 came up with the original “Passivhaus” label to describe them. (Former Green Building Advisor editor Martin Holladay recalls the early days in this article.)

Passivhaus made its way to the U.S. with Katrin Klingenberg, who first learned of this approach to building as an architecture student in Germany. She went on to build a Passive House in Urbana, Illinois, in 2003 and later co-founded the Passive House Institute U.S.

For a number of years, the two organizations worked more or less in tandem to spread the word and train Passive House builders, with PHIUS serving as the U.S. affiliate of the German parent company. But eventually, the marriage went south. It is easy to get lost in the weeds on the causes for this breakup, but unless you are a student of building history it is probably enough to know that today there are two distinct standards, one maintained by PHI and one maintained by PHIUS.

PHI has a single set of requirements that apply to houses no matter where they are built. PHIUS developed climate-specific rules that take into account the many variables of location.

The point is that there’s no architectural template for a house that can be certified. House shapes are often simple because they’re more efficient and easier to detail, but designers aren’t bound to produce any particular shape, layout or style in order to hit the Passive House standard.

PHIUS takes a slightly different approach. It developed a climate-specific approach in its PHIUS+ 2015 North American standard (updated earlier this year to the +2018 version). Like the PHI rulebook, this one sets certain limits on annual heating and cooling demand (in kilowatts per square foot per year). It also limits peak heating and cooling loads. These numbers are different depending on where you live. In the words of PHIUS, the standard “targets the sweet spot where aggressive energy and carbon reduction overlap with cost effectiveness…”

One point of divergence is how the two organizations measure airtightness, a key element of compliance. PHI has chosen a single number: With a blower door producing 50 pascals of air pressure, air changes can be no greater than 0.60 per hour (the shorthand for this is 0.60 ACH50). PHIUS went at this problem in a different way and settled on a requirement that buildings leak no more than 0.05 cubic feet per minute per square foot of gross envelope area at a pressure difference of 50 pascals (0.08 cfm at 75 pascals). Rule writers think this is a better way of scaling airtightness to the size of the building and takes away the inherent advantage that big houses have in meeting the 0.60 ACH50 target.

Which one to choose?

No matter which route you take, a house built to the Passive House standard will use far less energy and be much more comfortable than a basic built-to-code structure. So in one sense, it doesn’t really matter whether you go with PHI or PHIUS.

Chris Briley, an architect in Maine familiar with both paths to certification, describes them as “different means to the same end.”

But there are differences, not only in the metrics the two organizations use but also in the mechanics of how the houses are designed. Both rely on computer modeling to predict energy performance, but Briley finds the WUFI software for PHIUS-certified buildings more intuitive and easier to use than the Passive House Planning Package (PHPP) software that PHI requires. Other architects may prefer PHPP.

“I’m a graphics-driven person,” Briley explains. “I like to build a wall assembly and build a little SketchUp model and then put it into the model and let it spit out information. If you’re going the PHI route, you’re using the PHPP, which is basically a spread sheet, and it’s just so unexciting to convert absolutely everything into cells of information.”

PHPP apparently has added a plug-in that will allow the use of Sketch Up, he added, but WUFI still works better for him.

Briley also thinks PHIUS has been more aggressive about fine-tuning the “financial efficacy” of its standards and making sure that WUFI is up to date. But, he adds, “We like to say we’re Passive-dextrous over here, and we could use either one.”

It’s important to remember that there are architects and designers who much prefer the PHI standard to PHIUS. It just depends on who you ask.

“It’s not like everyone has to freak out about which one to do,” Briley said. “It’s more like which one is easier to work with and certify and what fits better in your workflow in your office.”

(For a much more detailed discussion of the differences in these two approaches to high-performance building, check out this podcast with Briley and fellow architect Phil Kaplan of Kaplan Thompson Architects.)

Podcast 319: Building in a Flood Zone, Who Pays for Warranty Work, and Converting Attics to Living Space