A New Old Way to Vent a Kitchen Island

The combination waste and vent system is a simpler alternative to island fixture vents and air-admittance valves, and a recent code change may make it more popular.

Synopsis: Code expert Glenn Mathewson describes three ways to vent a kitchen island: the island fixture vent, the air-admittance valve, and the combination waste and vent system. The combo vent is not a popular solution for island venting because in the past it was not permitted if a food waste disposer was included in the island, but this rule was not based on research and has been corrected in the 2018 edition of the IRC. Because many states and municipalities operate on older versions of the code, the combo vent may take a while to catch on, but Mathewson explains that it could be a welcome alternative to the other types of island venting.

Most builders and plumbers are familiar with two ways to vent kitchen-island sinks: the time-tested island fixture vent, and the newer air-admittance valve, or AAV. Neither method is exactly foolproof—they’re allowed in specific circumstances, and their acceptance and design are not universal across municipalities, states, or even code-writing entities. There is an arguably better method of venting kitchen-island fixtures, though—we’ll get to that in a minute.

As sophisticated as modern houses are, a simple cup of water is essentially the only thing keeping sewer gases from backing up into our homes. This cup of water sits in what is commonly called a P-trap. contrary to some assumptions, its name has nothing to do with the kind of liquid in it, but rather the shape of the plumbing, which is similar to a letter P that’s fallen on its face. Every time a fixture is used, the water in the trap is cleared and replaced. If the drain isn’t adequately vented, the rush of water from a draining sink or bathtub can suck the last bit of water out of the trap. Venting eliminates this siphoning action, ensuring that the last cup or so of water that enters the trap gets stuck there until the next time the fixture is used. This is tested science. You’d think everything in the code would be determined this way, but that’s not always true.

The “old school” method of venting island sinks is appropriately called an “island fixture vent” in IRC Section P3112. This island loop, which first appeared in the Uniform Plumbing code in 1958, was later recognized in most other model plumbing codes, and has remained largely unmodified throughout the years. With it, some exceptions to standard plumbing rules are loosened for the sake of kitchen design. A vent connects to the trap arm within the standard limitations, but rather than rise through the roof, this vent is allowed to turn horizontal and drop back down below the floor. It can turn before reaching the longstanding minimum height of 6 in. above the flood-level rim of the sink, provided it rises above the drain outlet at the bottom of the sink.

By rising at least above the sink outlet, the sink may drain through the vent, but not completely. If there’s a clog, water will remain in the sink to alert the user of the problem. This sort of “alarm” is integral in plumbing design. An island loop vent is allowed to turn below the top of the sink only because cleanouts are required to remove any blockage in the vent. Access for a drain snake takes the place of perfect plumbing design. clearance to this access is spelled out in IRC Section P3005.2.9 and requires 18 in. measured horizontally in front of the cleanout opening. This generally means orienting the cleanout to face the cabinet doors.

One gripe about the island loop is that it takes up a lot of space in the sink cabinet. It also requires many fittings and a specific geometry, and takes a lot of time and money to install. These shortcomings led to a search for an alternative solution.

That solution—the AAV— was invented in Europe by Sture and Doris Ericson (Stu-Dor), whose “Studor Vent” became common plumbing jargon for the device. AAVs arrived in the U.S. in 1986, but didn’t appear in model plumbing codes until 1995. These oneway valves allow air into the drain to protect the trap from siphoning water, but they don’t let sewer air into your home. Most appealingly, they eliminate the need for a vent to rise vertically through the roof or down below the floor, making them ideal for remodel applications where adding a new vent through the walls and roof of an existing building could be cost prohibitive. And they take up very little space. AAVs can be placed as low as 4 in. above the fixture drain or horizontal branch drain being vented. They have become the go-to for not just island vents or basement sinks far from existing vents, but anywhere else where the cost of pipe and labor would exceed the cost of the valve.

They can’t be installed until after the plumbing system has been tested for gas tightness, and, like island loop vents, they must be accessible. Most importantly, they aren’t a universal alternative, as some local codes don’t allow them. It’s not clear why they aren’t universally approved—the IRC and various plumbing codes allow the use of AAVs in various applications and there is an ASTM test standard that legitimizes their fabrication and performance. In places where they’re not allowed, it may be an all-too-common case of “we’ve always done it that way.”

The reason behind the prohibition on connecting disposers to combination waste and vent systems is spelled out in the commentary in earlier versions of the code, as in this note in the 2015 IRC: “Because of the low-flow velocities and volumes that occur in these systems, any solids introduced would accumulate, causing blockages and reduction of the internal cross-sectional area of the piping. Therefore, sinks equipped with food waste disposers and fixtures that discharge solid wastes are not allowed to be served by a combination drain and vent.”

This rationale, it turns out, isn’t based on science. It was an assumption. And it is wrong.

When the code is updated, the International Code Council publishes a book of “Significant Changes to the International Residential Code.” The 2018 edition comes clean about the prohibition on attaching disposers to combination waste and vent systems, noting, “When this restriction was placed in the code, there was no research and no field problems were identified to support the limitation.” The American Society of Plumbing Engineer Research Foundation did the research, and, “Their technical findings found no technical justification for placing a limitation on the discharge of food waste disposers to combination waste and vent systems.” 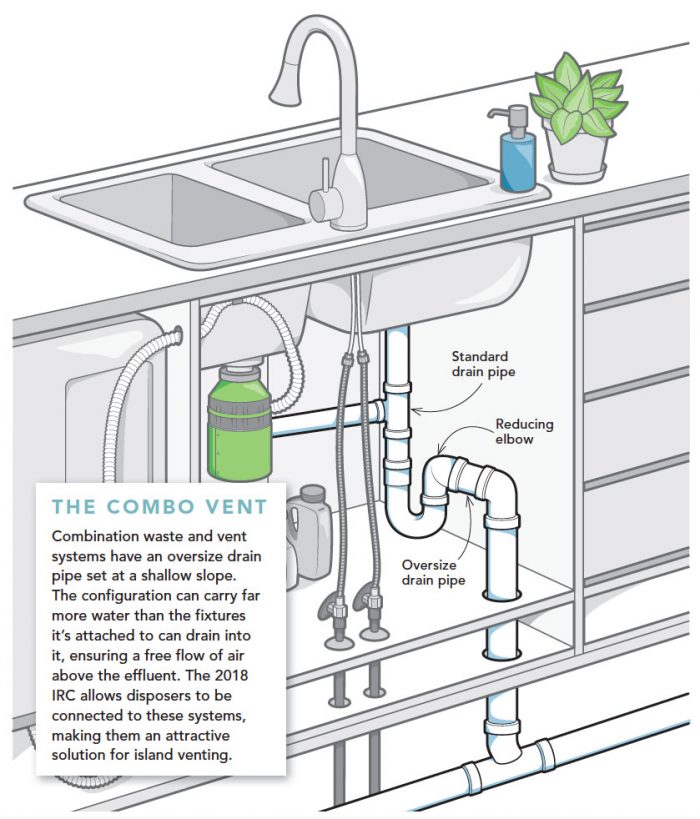 So the IRC was changed. Now, if you’re operating under the newest version, you can connect your food-macerating dishwasher and waste disposer to a combination waste and vent system. But for a clerical snafu, the International Plumbing Code probably would have dropped the prohibition as well—and it will in the 2021 update. This is good news for anyone planning an otherwise tricky-to-vent kitchen island, especially in jurisdictions where AAVs aren’t allowed.

While it’s a relatively minor change, it may have a major impact on the way builders plumb kitchen islands, making the job easier and less costly. Most states and municipalities operate on older versions of the code, though, so it may take a while to catch on. And just as certain parts of the code persist on the premise that “we’ve always done it that way,” some tradespeople and states will probably continue to use other methods on the same grounds.

This isn’t to say that the combination waste and vent system is the answer to every kitchen-island-venting conundrum—but it may be preferable to an island fixture vent, and, in locales where AAVs aren’t permitted, a welcome alternative.

Drain-Waste-Vent Systems – Although hidden behind walls and in floors and ceilings, the pipes that make up a house’s drain-waste vent system are the balance of the plumbing equation.

14 Tips for Bath Plumbing – From the supply lines to the waste line, these simple rules will make your work better.

Framing With The Plumber in Mind – A few tips to help you keep your sticks and nails out of the way of plumbers.

The team at the 2020 FHB House discusses why they saved an old stone chimney, and walks us through the details needed to add masonry veneer to a superinsulated house.