Solutions for a Small Lot

Ocean-front builds nearly always involve considerable restrictions, and this project in Freeport, Maine, was no exception. Builder Stuart Rice of Peter B. Rice & Co. worked with Thomas White from ACTWO Architects to shimmy the right structure into place in a way that would capitalize on the views of Casco Bay and make for an inviting home for a family of five. 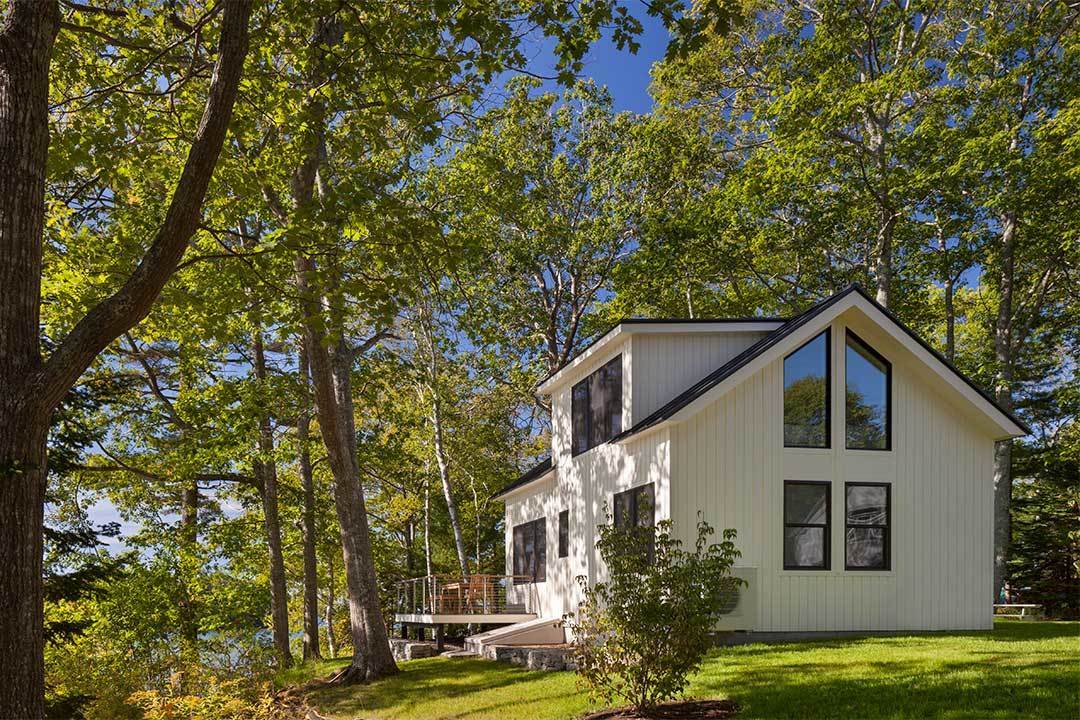 The lot size and close proximity to the water mandated the new structure be small. Measuring just 20 ft. by 28 ft. the simple gable form manages to house a galley kitchen, a common living area, two bedrooms, one-and-a-half baths, and a sleeping loft. All told, it can sleep four adults and three to four kids. “It’s the same idea as a tiny house, says Rice, “you are trying to fit in common requirements for plumbing, heating, and electrical in such a small space.” 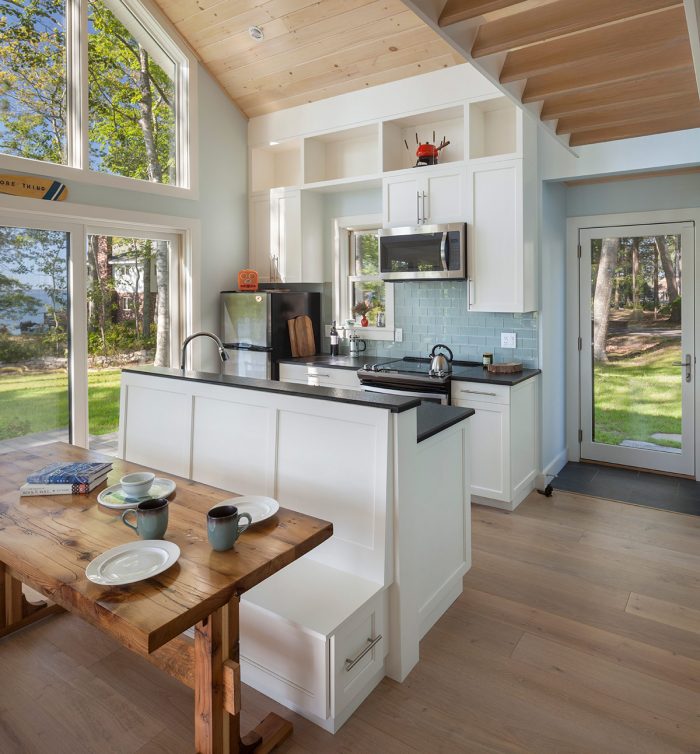 This kind of spatial constraint often leads to creative cabinetry and storage solutions, as was the case here. Though the kitchen/dining/living room space is a mere 19 ft. by 12 ft., the team designed and built the cabinets and an island with bench seating to maximize square footage and storage capacity. “The only way we could do that was to build vertically,” Rice notes. “We had to make the cabinets as tall as possible—basically to the ceiling. It being a cathedral ceiling meant we could go higher than normal, though the slope of the cathedral means you lose some height on the back.” Constructed with paint-grade maple and plywood, the full-overlay frameless cabinets are notable for the way they simultaneously divide the space and leave it feeling open. 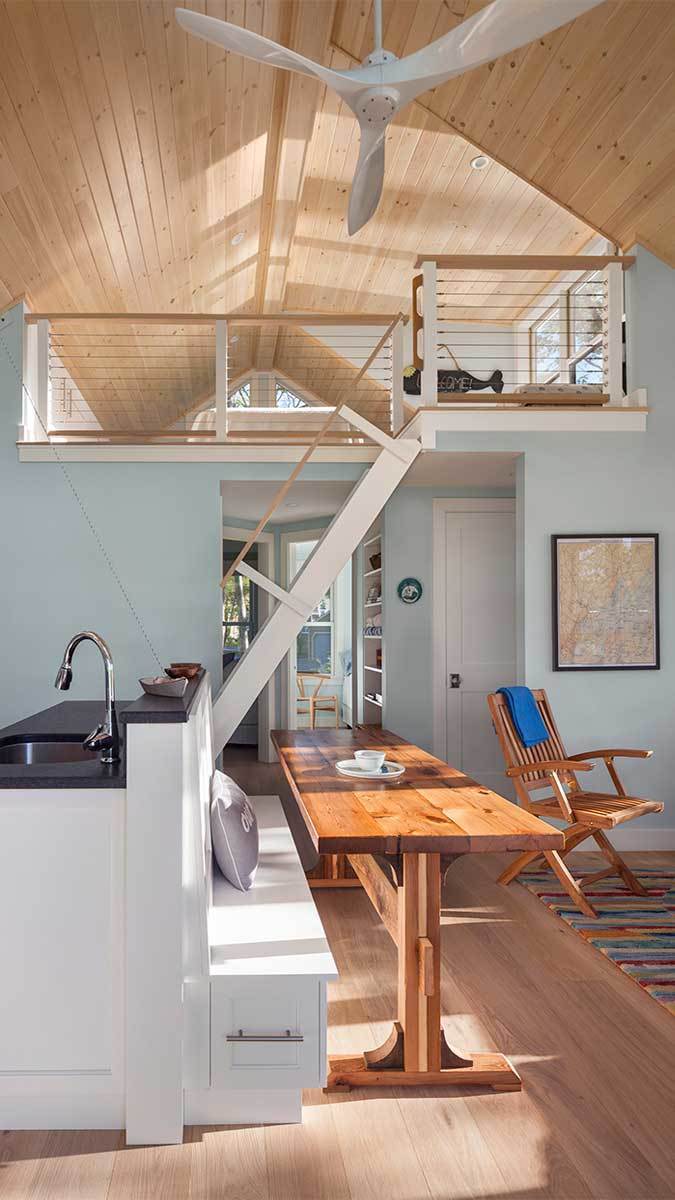 According to Rice, getting the angle right for the bench seat back was a challenge. “It had to be comfortable to sit on but also look nice and incorporate some storage beneath,” he says, noting that the difference between a 90° angle and the 105° they went with made all the difference.

The plumbing was complicated by the sink in the island, which needed to be vented up and out of the attic on the backside of the house. Given the cathedral ceiling, they added a knee wall in the loft to be able to run lines from the basement and into the roof line. The plumber had to tie four pipes together in a 2-ft. by 10-ft. insulated space in the rafters—a trying task, to be sure. 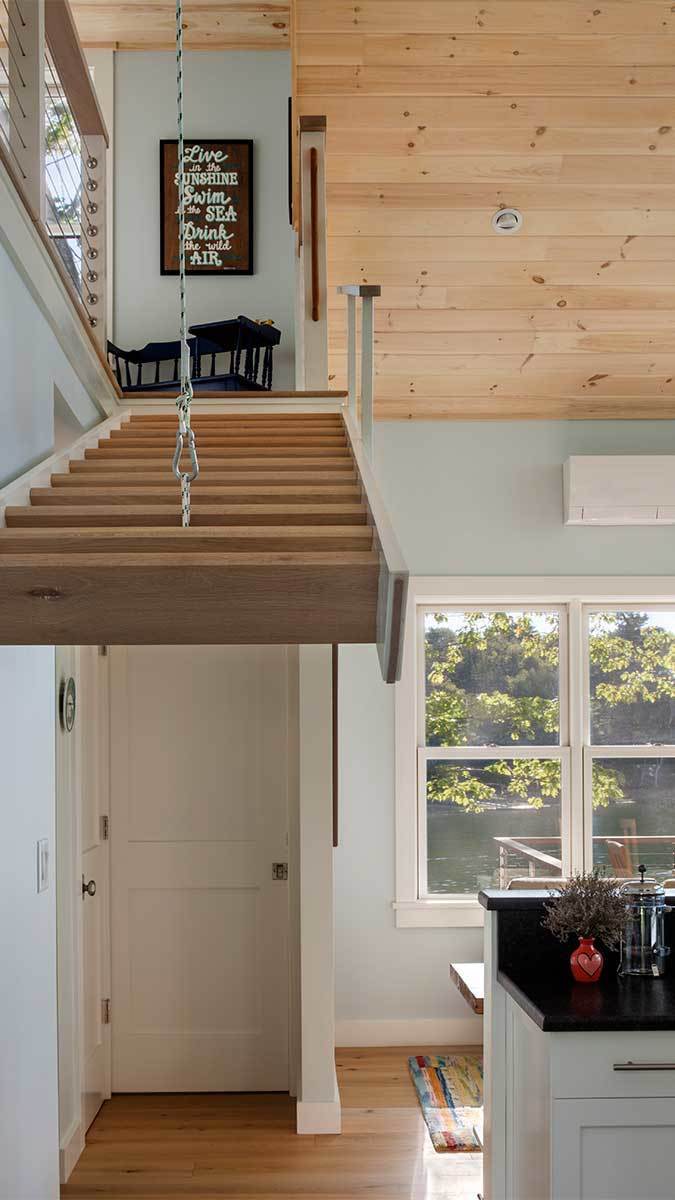 In addition to their custom cabinetry work, Rice’s crew engineered an innovative solution to accessing the loft. Had they fixed a ship’s ladder, it would have been in the way. If they had built it to be raised manually, it would have been clumsy. Instead, they made use of a recycled garage-door opener kit that came from a demo project. The door track and opener were put in the basement, and the chain was run through conduit up to the loft; that line goes back down on a pulley and attaches to the bottom of the ladder, which is operated by remote control. The ladder lifts and locks into a horizontal position held by tension. “It is the showstopper for most people when they first see the house,” Rice says, noting that the ladder itself is made of oak, the treads are the same engineered flooring found throughout the house, and the cable railing keeps the view from the loft to the bay unadulterated. 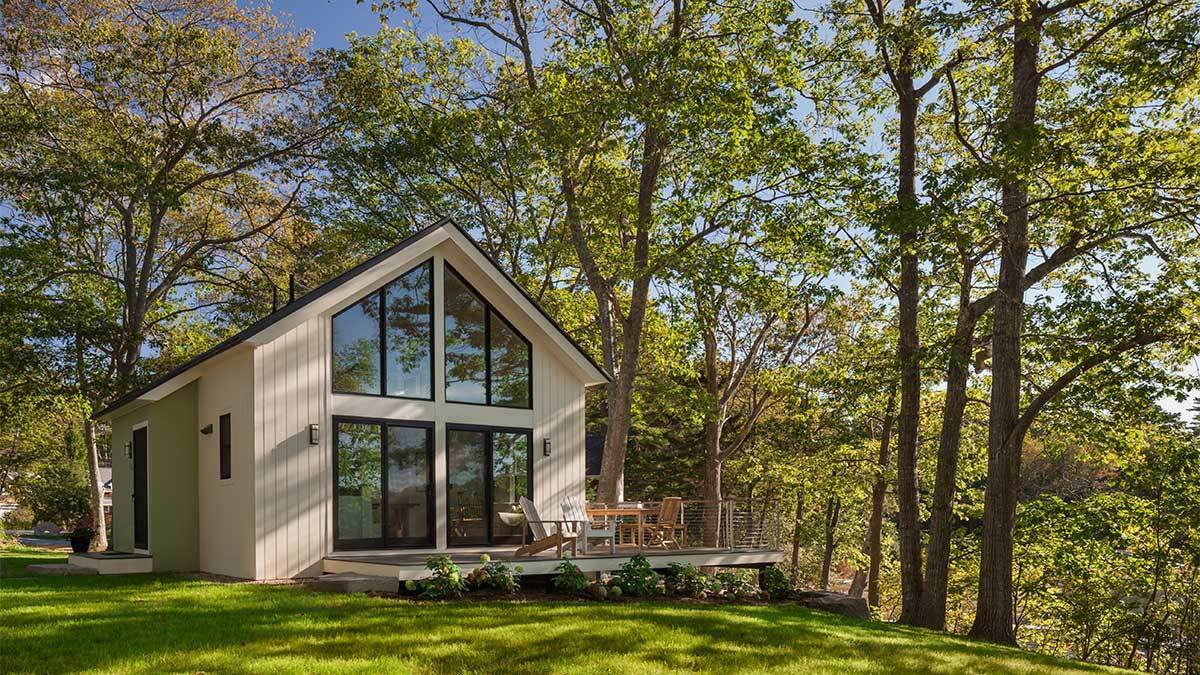 The water-facing gable end is nearly all glass—from Marvin’s Elevate Collection. The wall had to be engineered to withstand a wind load of 150 mph, so the lack of framing was handled with steel beams and engineered wood. With an R-49 closed-cell spray-foam roof assembly, Rockwool R-23 walls, and an R-30 floor, the house can be occupied year-round. A single-source heat pump and three mini-splits keep it comfortably conditioned in the Maine climate.

Overall, the compact home has an efficient, yacht-like feel. It is an excellent case study for making the most of little square footage. 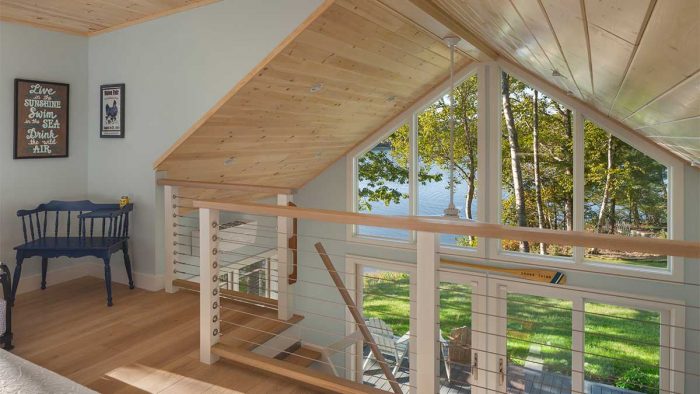