Water-resistive barriers have a tiny air gap, but is it large enough to feed a flame?

Drainable housewraps have gained popularity in our area. The notion that any water would drain away easily seems appealing. But has anyone studied the effects of fire? It appears to us that these wraps would create a chimney effect as well as an opportunity for the fire to spread sideways at an alarming speed. We have an old house (1878) that is due to be re-sided. The new building code requires that we use a drainable housewrap, but we have decided not to when we re-side. We are not comfortable using a product we do not perceive as safe. Can you advise?

—MAIJA and STEPHEN WARNOCK via email

Deputy editor Matthew Millham responds: Drainable housewraps can be very effective at keeping walls dry, and for meeting code requirements that exterior walls be built with a means of draining water to the exterior so it doesn’t accumulate in the wall. Like many materials that go into building a home, most if not all of these higher-end water-resistive barriers (WRBs) are tested to see how fast flames spread on them if they catch fire. Unlike commercial buildings, this testing isn’t usually required by the International Residential code, which establishes minimum requirements for detached one- and two-family dwellings and townhouses. I spoke with Robert E. Solomon, Director of Built Environment codes & Fire Protection Systems for the National Fire Protection Association, about drainable WRBs to get a sense of their safety. All of the drainable WRBs he’s surveyed have a class-A flame-spread rating. That, he said, “is the best rating you can get for a material that’s going to burn.”

But not all WRBs meet the class-A flame-spread rating. In fact, the only WRB specifically mentioned in the IRc is “No. 15 asphalt felt,” and I’ve yet to see a brand of felt that has been rated for flame spread (since it’s paper impregnated with petroleum, I assume it wouldn’t test well). I would argue that a WRB that has been tested and shown to perform well in flame testing is a better bet than one that hasn’t been tested, or at least isn’t rated.

The “chimney effect” you mention has also been studied, though not, to my knowledge, using drainable WRBs specifically. But the conclusions of those studies can be extrapolated to them.

Canadian research into the effect of air gap size on fire propagation has shown that fire has a hard time spreading in small air gaps, even when the material bounding the gap is combustible. In one experiment, researchers built test walls that included various types of rigid-foam insulation—setups that mimicked the vented rainscreen assemblies used widely these days. The researchers varied the size of the air gap between the foam and the exterior facade, and exposed the different assemblies to flame to see what would happen. They found that flames began to spread up the foam when the air gap was 25 mm (about 1 in.), and really took off when the gap got larger than that. When the air space was reduced below 25 mm, flame spread was insignificant, even with the most combustible rigid foam tested. The reason for this, they concluded, is that the oxygen needed to feed the fire can’t be replenished quickly enough due to the small size of the air gap. Almost as soon as flame is introduced, the oxygen content of the air in the cavity drops to such a low level that it’s impossible for anything to burn, even if the material is combustible. These findings have been replicated many times over the years. 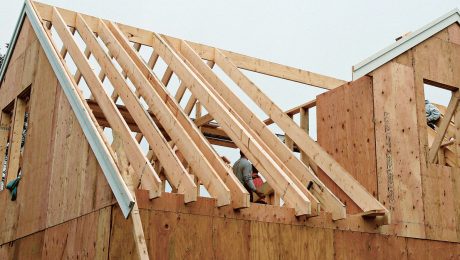 When Will We See the End of Soaring Lumber Prices?