Uncovering and reconfiguring hand-hewn timbers results in a character-rich kitchen.

Synopsis: Built in the early 1860s, this old farmhouse has seen numerous remodels. The latest work involved a gut remodel of the kitchen in the timber-frame section of the house, which became a two-story open volume. Using dry-ice blasting, remodeler Lou Salge revived the old timber beams, which now act as a decorative, non-load-bearing element. The resulting kitchen is a mix of historical details, with more modern appliances and finishes.

I spent the better part of two years working on this house, as well as a few other buildings on the five-acre property. The farm sits on the corner of a couple country roads outside Ashley, Indiana, and has been in the same family for over 100 years—my client is the fourth-generation owner. The goal of our work was to get it ready for another set of generations.

Like most old farmhouses, this one had been remodeled a few times over the last century. Built sometime in the 1860s, the original portion of the house is timber-framed, and now contains the kitchen and the dining room. My crew and I made our way over every square inch of the place, including a half-story added to the timber frame in the 1870s, a rear addition likely done in the 1920s, and some work by the homeowner’s father, who tore off and rebuilt the back section in 1995. In 2018, we gutted everything down to the studs, reconfigured the interior partitions, stripped the exterior, and added a garage. Our vision for the kitchen was to transform the central timber-frame section of the house into a two-story open volume.

Peeling back the layers

We knew there was a timber frame in there because the homeowner had hired a specialist to do some exploring— enough to assure us that the timbers were structurally sound, albeit covered in lath, plaster, paint, and even wallpaper applied directly to the wood. When we opened everything up and removed the attic floor, as well as the interior walls that cut through the space, we discovered a few of the wall posts had been cut. To remedy that, we removed the logs that composed the first-floor framing—they were hewn only on the top and bottom—milled them down, and used them to replace the missing posts.

Back when the half-story was added, the frame was cut to create a doorway into the attic. We went back and forth about whether or not to scarf in new timber where the beam was cut. The homeowner, an engineer, decided on a different approach, and fabricated a steel angle that we bolted on to reinforce the compromised beam. He turned it into a fun design element by having it inscribed with a quote from Abraham Lincoln’s Farewell Address: “To this place, and the kindness of these people, I owe everything.” Lincoln delivered the speech on February 11, 1861; the homeowner figures it was within months, perhaps weeks, of the original home’s completion.

Even after exposing the frame, it was hard to tell what we were working with until we had it blasted with dry ice, which removed 150 years’ worth of layered paint, dirt, and debris. It was our first experience with dry-ice blasting, and we have used it a few times since. The technique is similar to sandblasting, but I prefer the dry-ice method because it’s cleaner, it’s faster—it took just one day to blast this entire frame—and it doesn’t leave any abrasive pocking. Sandblasting is harder to control, and the sand tends to drive into the checks in the timber, only to fall out over time. Sand-blasting also tends to result in a weathered, driftwoodlike texture, which was not the look we wanted.

Next, we applied three coats of sealer to the timbers, and covered up the whole frame with plastic and bubble wrap to protect it through the finish stages. The timber frame does not carry any loads—it’s a freestanding structure inside the new walls, which we built outboard of the timber frame. We added a new ridge beam and set new rafters in an effort to get better insulation properties. All of the drywall was fit between the timbers. 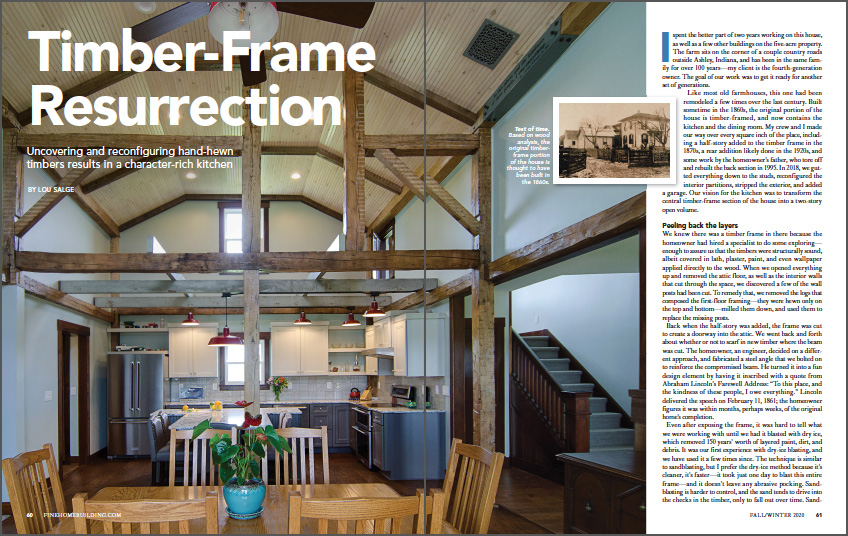 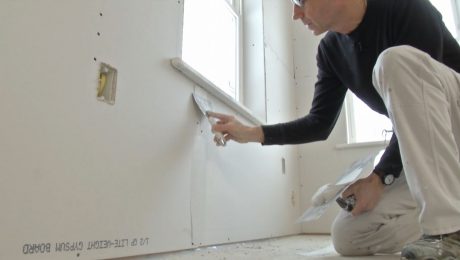 While taping a butt joint intersecting with a window sill, Myron shows how different knife angles produce the right outcomes depending on what you are trying to achieve.