Is There an Easier Approach to Air-Sealing?

Bring a house to code-required airtightness in just hours with AeroBarrier.

Synopsis: Meeting code-required airtightness levels can be a challenge. One solution is the AeroBarrier air-sealing system, which uses an atomized water-based sealant that’s forced into gaps and cracks in the building envelope with air movement created by a blower door. AeroBarrier installer Ross MacPherson describes the process of prepping windows, doors, and other openings for the AeroBarrier sealant; running the machines; and calculating results.

I first learned about AeroBarrier in 2018 from a segment on This Old House. At the time, I was working as a Home Energy Rating System professional, or HERS rater, helping builders create energy-efficient homes and satisfy the airtightness requirements Massachusetts put in place in 2014—less than 3 air changes per hour at 50 Pascals (<3 ACH50). I was impressed with how quickly AeroBarrier sealed a house and how the sealing could be measured in real time. About two weeks later, I signed up to be one of the country’s early AreoBarrier dealers. Since then, I’ve air-sealed more than 85 projects with the system, and I’ve learned a lot along the way. This article follows a typical installation. 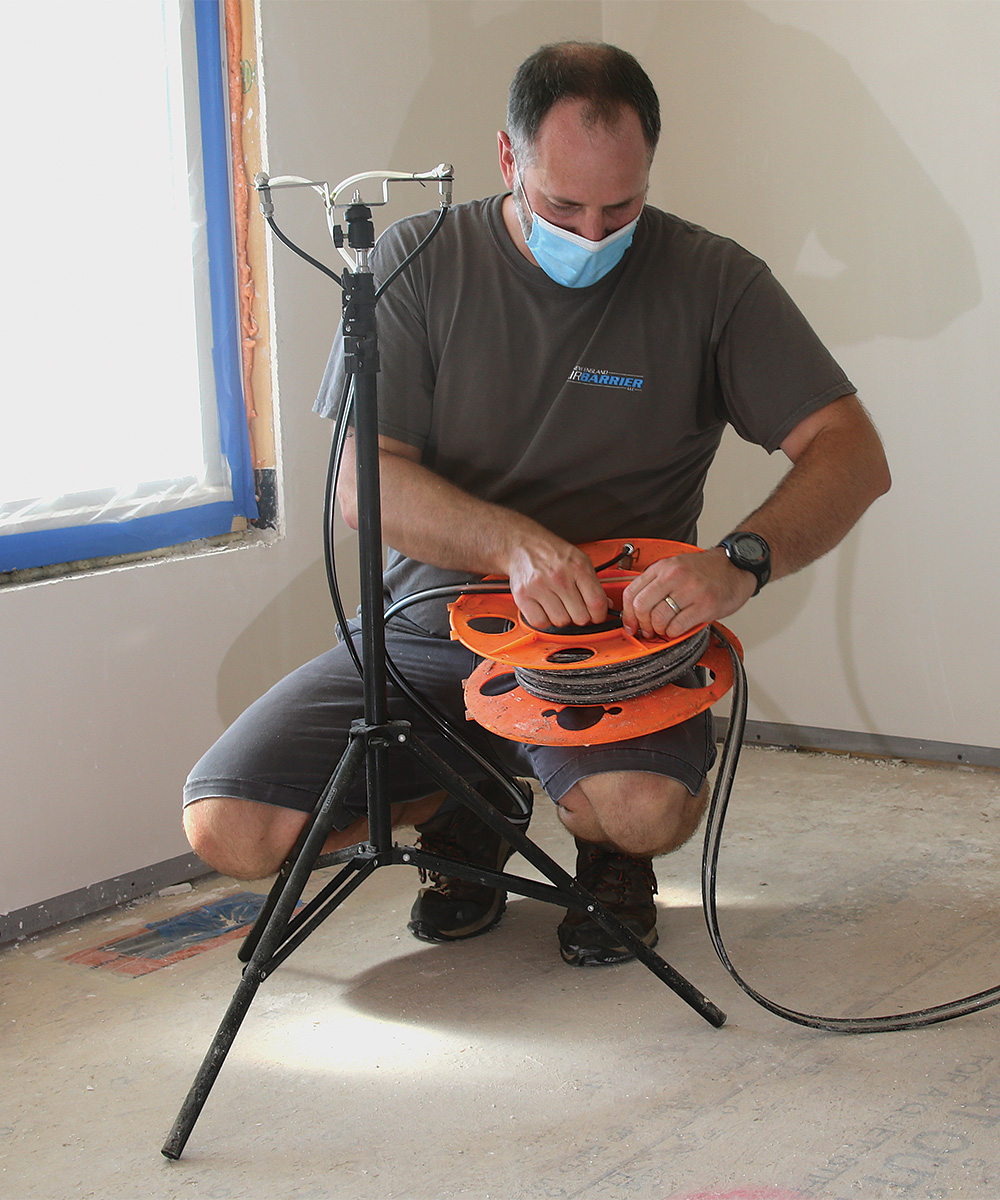 Developed at the University of California, Davis in 2013, AreoBarrier is an air-sealing system that uses an atomized water-based acrylic sealant that’s forced into gaps and cracks in the building envelope with air movement created by a blower door. Collectively, all these tiny gaps contribute a huge amount to a home’s air leakage. The sealant closes off these tiny holes, greatly improving a home’s airtightness.

Currently AeroBarrier is almost exclusively used in single- and multi-family new homes under construction. The most common time to air-seal with AeroBarrier is after the drywall is finished and before trim is installed. Existing houses are a challenge, because it’s labor intensive to protect a finished home from sealant overspray.

The largest gap the process can seal is 1/2 in., so it won’t by itself seal big leaks and it doesn’t work as well in older, occupied multi-family buildings because it’s nearly impossible to keep the sealant contained inside one or two units. But for a builder who is already building reasonably airtight single- or multi-family homes, it’s often faster and less expensive than meeting the airtightness requirements other ways.

As an AeroBarrier dealer, I sometimes feel like I’m a victim of my own success as a HERS rater. My job was helping builders meet their energy targets without AeroBarrier. Now, when I pitch AeroBarrier to builders, they often ask, “Why should I use AeroBarrier when I’ve been meeting 3 ACH50 without it?” The answer is that we can use the HERS rating to value-engineer the project without hurting—and possibly improving—its energy performance. 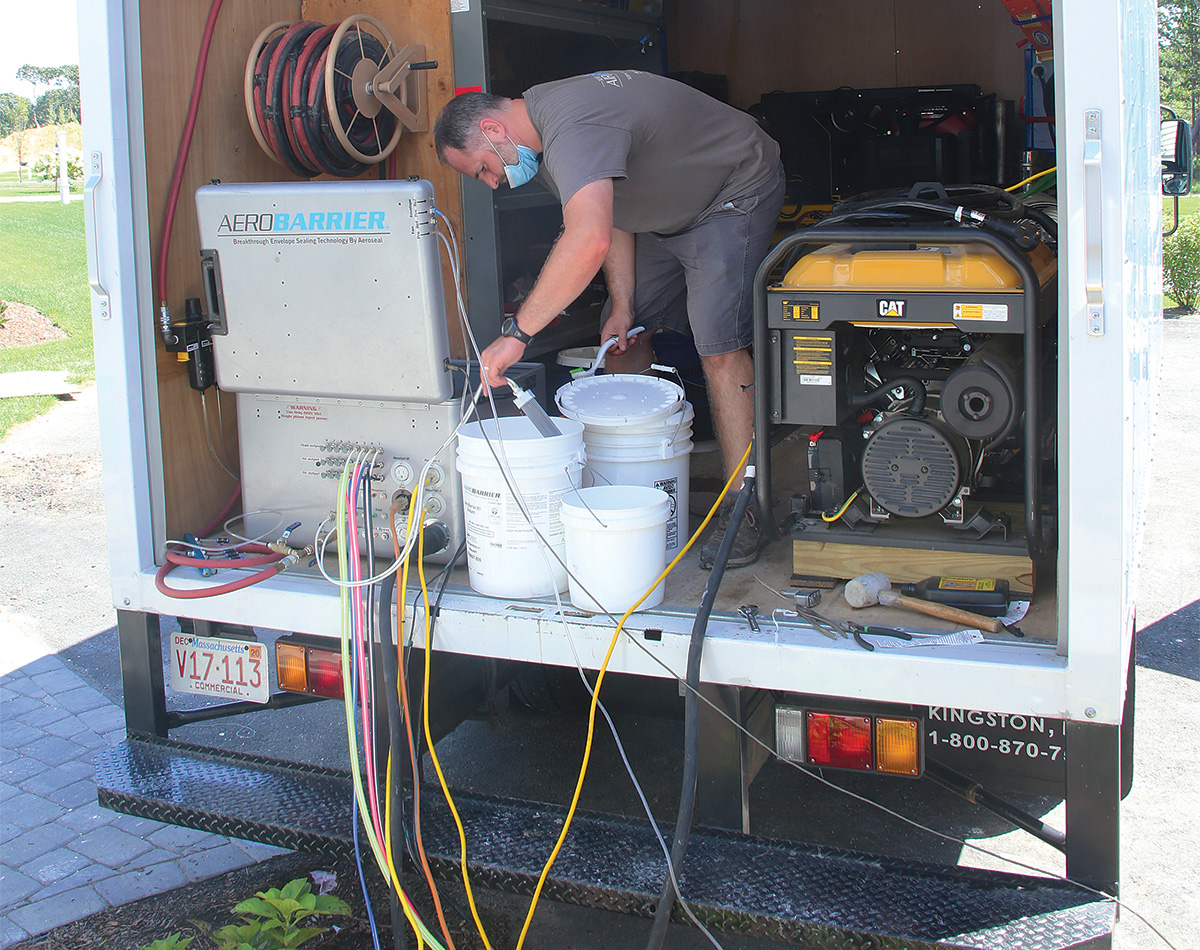 A HERS rating analyzes a home’s energy performance compared to a reference house built to the 2006 energy conservation code, which is assigned a rating of 100. The lower Air-Sealing? Bring a house to code-required airtightness in just hours with AeroBarrier By Ross MacPherson the number, the better the home’s performance, which is represented as a HERS score. HERS Index scores tell you how much better or worse a home performs compared to the reference home—the Massachusetts building code calls for a HERS score of 55, or equivalent home performance calculated through other methods. The number takes into account insulation, windows, HVAC, appliances, solar orientation, and airtightness, among other things. Better-performing components can offset lesser-performing products in a trade-off scenario. For builders who aren’t already hitting the 3-ACH50 airtightness, AeroBarrier provides a guaranteed path to get there. And even for those who are, it provides a more cost-effective, less fussy, and much faster way to hit the target. 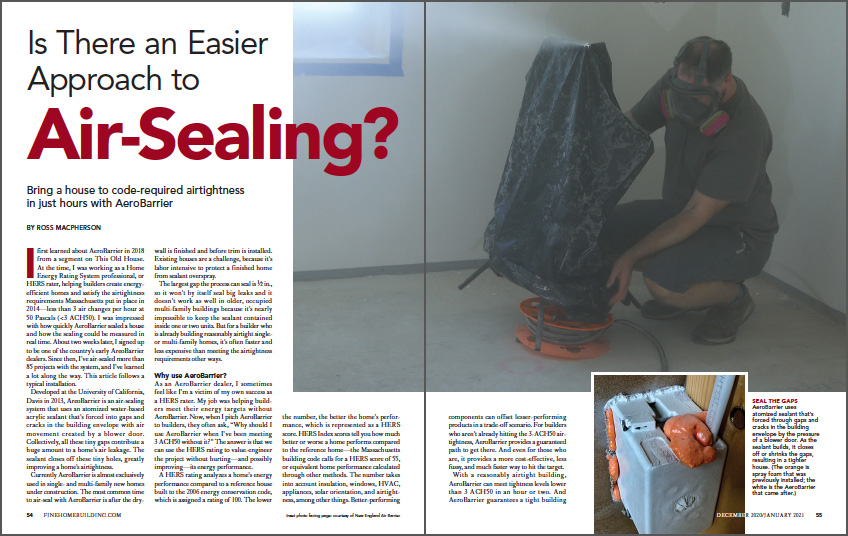 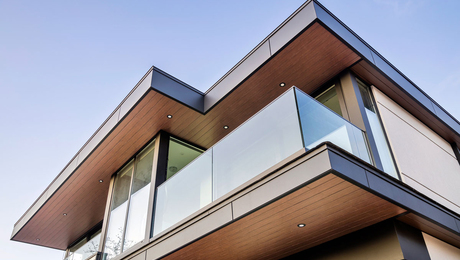 Despite technical issues with the online exhibitors' booths, there were still many new things to discover.