Our house was built back in the late 80s. It is a ranch style with a full-width front porch. The long sides of the house face East and West and the majority of the basement is below grade (perhaps three courses above ground everywhere except the North side, which has the garage). (Middle Tennessee, so it’s occasionally teens or below 0, but more common around freezing in winter.)

The basement is 40% garage and 60% finished/heated living space. The section under the front porch is the same depth as the basement and done with an entry from the garage area and a gravel floor. The porch part of the basement has its own French drain system.

I’m in the process of upgrading the insulation in the garage ceiling (and replacing the garage doors with insulated ones). Once that’s done, I plan to add an interior insulated stud wall in the garage (with foam separating the studs and the concrete block) to the North side. What, if anything, can I do to the basement wall that is shared with the porch area?

Even though the ground provides a lot of mass, it’s cold mass so my goal is to extend the internal stud wall around the entire perimeter but I don’t know if that’s worth it or going to be that big a help. Any ideas or opinions? Thanks! 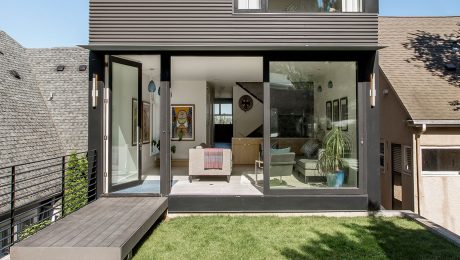 Connecting to the Outdoors and Neighbors

Working within a small footprint, this remodel for an intergenerational family incorporated simple elements to open up the space both inside and outside.