I expect to have to build a deck and possibly a shop when I move in the next year or so and because I have to replace a porch on my current house I thought I’d get a framing nailer now.  I am considering one of the Bostitch framers that has an attachment to allow it to handle metal connector nails in addition to the normal framing nails.  They offer two versions: one that uses 33-degree, paper-collated nails and one that uses 22-degree, plastic-collated nails.  Question one: is there an advantage to one method of collation over the other?  I’ve read that the plastic ones sometimes suffer from flagging, i.e. leaving pieces of plastic stuck under the nail-head.  This would be a problem on visible surfaces, such as railings and decking, wouldn’t it?   How big of a problem?  On the other hand, plastic-collated nails seem to be more readily available in the local big boxes.   Question two: is one angle significantly better than the other?   Thanks. 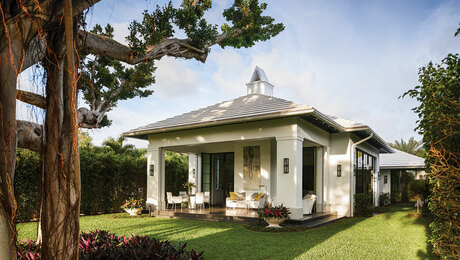 A concealed kitchen appears from behind the common room's cabinets and countertops to outfit this fully functioning golf-course cottage.