How to reinforce joist ends?

This is the same kitchen as in my “top plate” post.  The second floor of this house used to have the roof coming down at about a 12/12 and no living space.  The roof has been lifted to put a shed dormer above the kitchen.  The ceiling joists used to sit on an exterior wall, but that was cut through in a previous remodel and now there is an LVL,  THe jopists are in hangers attached to the LVL.

As you can see in the photo, when the house was built in 1946 they “clipped” the top corners of the joists to accommodate the rafters.  Now we have a 2×6-ish end on a 2×8 joist sitting in a hanger.  The inspector says that we can leave them in the hangers since the joists have been clipped for 70+ years (and we didn’t clip them).  And as you can see in the photo, the ends are hardly high quality anymore.  The other hangers are the exterior wall of the shed dormer which is now hanging on the LVL and not bearing on the floor joists.

We had planned to try to sister the joists but found there is too much in the way once we got the plaster off.  The first 3 joists have a vent pipe pushed through them and there is too much plumbing and floor joists going the other way on the inside bearing wall to get the sisters resting on it.

I was thinking about gluing and nailing (screwing?) 3/4 plywood plates (48″ x 7.5″) to either side of the bad joists and then putting them in double hangers just to give us some peace of mind. 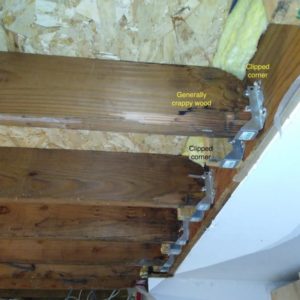 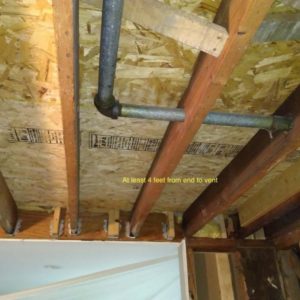 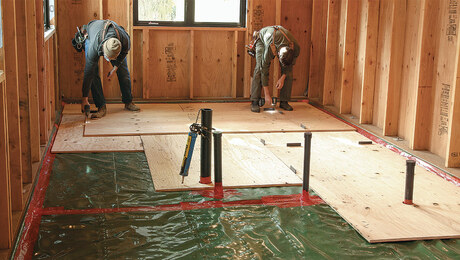