I am planning to replace my current deck and do some upgrades.  The deck’s attachment to the home is not like anything I’ve been able to find in code references, videos, or anything. So I am stumped.

The current raised deck is attached to the home using two ledgers as it’s an inside corder of the exterior of the home.  The present ledgers are improperly attached, only 2×6, and fixed to wall studs on the long side. The whole thing is over a walkout basement.  Basically, it all has to go.

The tricky part is my Illinois home has two finished floor heights and both areas have deck access.  The short edge of the deck will connect to the home where the floor is 1 foot lower than the long edge.  I am thinking this would best be done by building a multilevel deck where the end at the lower floor height attaches via a ledger connected to that wall’s rim joist.  This lower deck would be about 7×12.  The remainder of the deck would be 1′ higher and attached aligned with the higher rim joist for that wall.

I really do not want to use an added post as it would be too close to the foundation.I am attaching a simple 3d render showing the two planned ledgers in green.  Also including a photo (ignore the mess) if it helps. 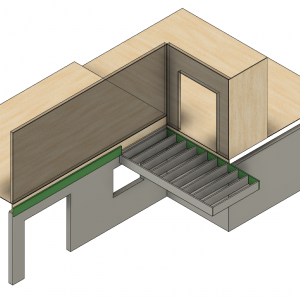 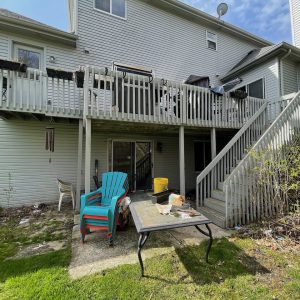