Here are some shots of a project I’ve been working on the past month. It is going to be an interpretive centre owned by the Osoyoos Indian Band in Osoyoos,  BC. The site is on one of the few remaining pieces of desert environment in Canada. The Sonoran desert peters out in the Okanagan valley just inside the Canadian border, and the band has preserved a significant chunk  of it. They have had a temporary visitor centre on site for 3 years and now the permanent structure is being built.  This is an enterprising group;  close by they have a vineyard and winery, an 18-hole golf course, a townhouse development and a 60-unit hotel just being started. Some of the band members we have working on site have had continuous construction work there for more than five years.

The most obvious feature of the interpretive centre is a rammed earth wall. It is formed in a similar manner to a concrete wall, then sieved clean soil mixed with colouring and cement is poured in and then compacted by jackhammer with  a special  ‘foot’ on the bit.  Different layers are added to  give the banded colour effect you can see in the photos.  The wall is 18″ thick and 17′ high. The back wall is a concrete retaining wall as the building is cut into a fairly steep hillside – the idea being that it will blend into the desert surroundings. Roof is suspended concrete slab that gets a rubber membrane then 2 ft of soil and landscaped with sagebrush and other desert vegetation.

Architectural details are stark but tricky. All concrete corners are 90 degree, no chamfer allowed, so every joint in the form is siliconed to prevent bleed through. There will be no baseboards in the finished building, just a small concrete reveal tapering from 1/2″ wide back to 1/4″. These all had to be cast into  the walls at exact height as the floor slab is not placed yet. Lots of odd angles, non-parallel walls, curved walls, a real layout delight. Plus all in metric because there is some federal funding.

I’ve included a shot of some stairs I formed last week. No nail hole permitted in the walls or floor slab,  so all risers are held in place by feather wedges. The inverted stringers are braced back against a wall. Just to make it fun, the wall between the two stairs is not parallel to the walls on either side, so the stairs on the right get wider as you go up, and vice versa. I made sure to put a deep saw kerf in the back  of the riser forms on the left stairs so they can be broken out easily,  as they will be firmly wedged in by the concrete pressure. 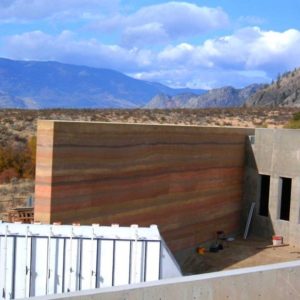 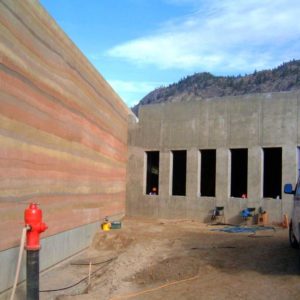 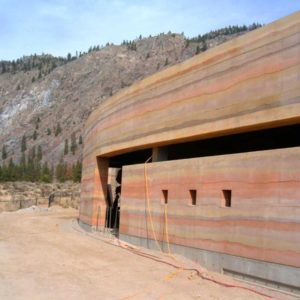 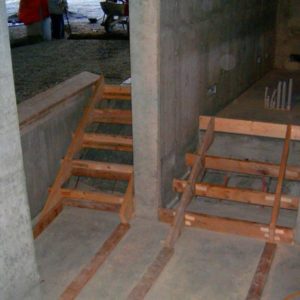