So I am planning a modern house and I want to include electric roller blinds but I want them completely hidden.
One of the other ideas I’m going for is lots of exposed, beefy glulam framing, including plenty of ‘fake’ framing details such as 3/4″ veneer slices of a glulam beam above the windows as an “exposed header” over the drywall. The sides and bottom of the window would have a drywall shadow reveal to make the window appear ‘suspended from the header’

Combining the two:
My best idea (and best is a rich term for me!) is to frame the window with a full-width 4″x4″ cavity above the window head framing for the roller blind then cover it with the Glulam veneer [which would have to be removable incase the blind needed service]. There would be no drywall at the head of the window allowing a 5/8″ opening between the window from and glulam for the shade to descend.

Slick or stupid?
Structural header would be above the cavity or from rimboard above.
issues I can think of:
excessive flex of the window head flat 2×4
Insulation of cavity severely reduced, fill behind the shade but maybe 1-2″ of polyiso board at best.
Possible moisture intrusion, line the cavity with vapor barrier first?
Wall would be fully sheathed with 1/2″ ply, but possibly connect the head jamb 2×4 above the window with metal strapping running up each upper cripple stud 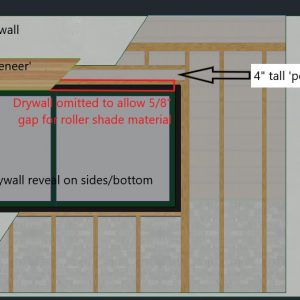