what do you think?

I’ve been a subscriber to FH for quite awhile & finally have a question worth posing to you.

I’m planning to cut the slab in our basement around the perimeter and install a french drain that will empty into the existing sump well.  Most of what currently drains into the sump comes from under the slab flowing around the outside of a cast iron floor drain which drains into the sump.  We had 4 days of rain in late March that saturated the ground causing seepage between the foundation and the footer in the basement – just enough to ruin area rugs and make a huge mess.  BTW, the house was built in 1968, and the basement has only one drain – 10 feet from the sump.

I did the new french drain on the outside of our last house and I do not want to go through that again.  This time, as I stated above, I plan to cut the basement floor around the outside walls, install a 3″ perf drain in new gravel with landscape fabric wrapping between the mud & the gravel and pitch it to drain into the sump.

Here’s my question to you… to hedge against future water damage from the foundation leaking again at the footer, I am considering using a piece of COR-A-VENT to serve as a channel to allow any future seepage to drain into the french drain from the bottom of the foundation wall at the floor level.  Have any of you ever done this?  I can’t see why it wouldn’t work, but would like those of you that do this full-time to mull it over & tell me why it wouldn’t work.

Although I plan to seal the foundation at the floor with some kind of silicon sealer,  I don’t want to do all the french drain work to have the water leak through the foundation again and puddle all over the basement.

Thanks for your time, 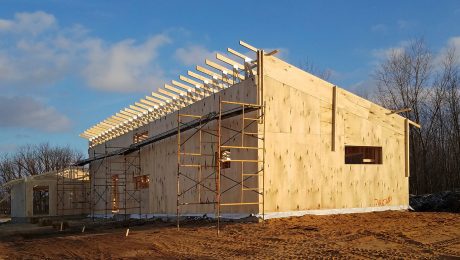