These stackable manufactured concrete piers are one option if you care more about saving time than saving money.

Last fall my local lumberyard began stocking EZ-Tube from EZ-CRETE. The display was intriguing – a simple stack of precast concrete sections tied together with a galvanized rod. I gave the system a try this summer on a small deck to see how easy they install and determine whether they’re cost effective when compared to formed and poured footings. 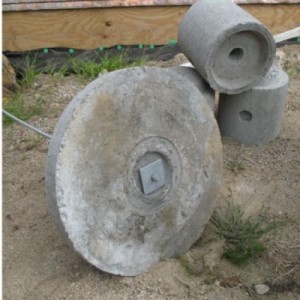 Dig the hole, drop in the sections, backfill – you’re ready to build.

There’s no getting around digging and backfilling the footing holes whether pouring in place or using EZ-Tube; the only difference is that you need to level off the bottom of the hole for the EZ-Tube base so the sections stack up plumb.

Once the hole was prepped I inserted the galvanized rod through the base section and held onto the rod to lower base into the hole. The base weighs a manageable 80 lbs. +/-. 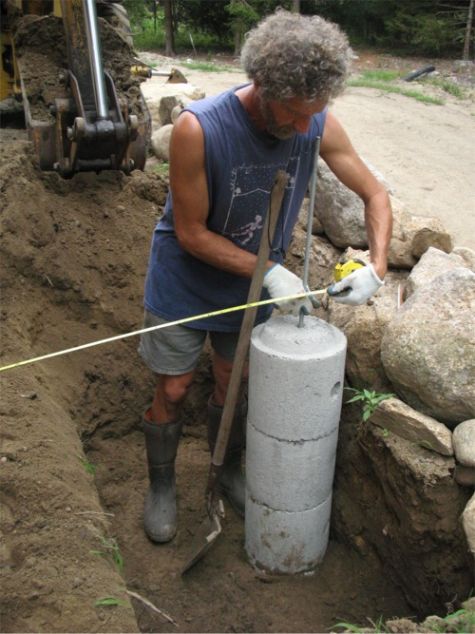 The manufacturer recommends applying a sealant or mortar between the section joints. There’s no structural benefit to the sealant but it helps keep damp soil from collecting in the joints and expanding in freezing weather. This shouldn’t be an issue in well-drained soils.

There is some play in the stack of sections so I periodically checked when backfilling to make sure the tops remained in the right locations. Had a base been a little off, this play would have enabled me to shift stack an inch or two in any direction to dial it in. And since the connecting rod doubles as the anchor for the post base, it is important to orient the top right where you want it.

It takes just a little longer to place the EZ-Tubes as it would to set footing forms for cast-in-place footings.

Other Considerations – Why you may want to use EZ-Tube:

Right now EZ-Tubes are only stocked at some building material dealers in NJ, NY and New England states. The makers hope to expand distribution.

The footings themselves can handle anything you throw at them. The limiting factor will be the soil beneath. Here are quick calcs. for the 22 in. diameter base and the 12 in. section using the load bearing listed in the 2015 IRC.

EZ-Tube precast footings.  22 in. base section with four 12 in. diameter sections stacked on top.  A galvanized rod ties the stack together and anchors the post base.

Close up of the 22 in. base bottom with galvanized rod and 12 in. diameter section.  Note the recess that mates with the crown on the base and other sections.

The base with the center rod is jockyed into place in the bottom of the footing hole.

Sections are stacked atop the base up to grade level.  A plank along the side of the hole makes it easier to get the sections over the center rod.

Top of footing is adjusted to precise distance from the house during the backfill stage.  There's enough play between sections to shift a 4 ft stack an inch or two in any direction as needed.