Synopsis: Fine Homebuilding contributing editor Mike Guertin loves building decks. Here, he shares his expertise and some lessons he’s learned over the years in a series of challenges and strategies for building the best deck possible. Among the lessons Guertin shares are the use of brackets to separate the ledger from the house; the proper installation of flashing to isolate galvanized joist hangers; the need to set up a straight rim beam on temporary supports; the time-saving importance of using a joist-hanger jig; the need to install deck posts in the right place; and finally, the proper way to work safely if you’re building a deck that’s not at ground level. This article includes a sidebar on using footing forms.

I love building decks. If I had to pick one part of the house that I enjoy building the most, it’s the deck. There’s no rush to dry it in so that other subs can work, it’s a straightforward outdoor project, and we’re heroes when the job is finished. Lately, my decks have been getting better as I find better ways to use new products and techniques that extend the life of the deck and its host structure.

There are numerous ways to design and frame a deck structure, which typically consists of the footings, the posts, the beams, the ledger, and the joists. I like to use framing layouts that suit the deck design and simplify the framing as much as possible. This project consisted of a 900-sq.-ft. wraparound deck that began 8 ft. above the walkout portion of a finished basement and patio, and ended at grade level at the back door.

Instead of building a deck frame cantilevered over a carrying beam, I incorporated the load-bearing characteristics into a rim beam made of a doubled 2×12 to maximize the headroom and to reduce the need for a forest of support posts. The wider rim also would later help to conceal a deck drainage system that I would install before the decking went down.

Beefy brackets separate the ledger from the wall

The first challenge in any deck project is mounting and flashing the ledger to the building. Ledgers conventionally bolted to the wall framing usually demand a flashed break in the siding, a time-consuming method that’s often not weathertight or rot-resistant.

On this deck, I used heavy-duty aluminum brackets from Maine Deck Brackets; I find them ideal for shingle siding. The beam-shaped sections are bolted directly to the house’s rim joist. In turn, the deck ledger is bolted to the bracket’s outer flange. To make the bracket’s point of attachment as solid and as waterproof as possible, I first strip back five courses of shingles to create a space about a foot wide. I then lift up a flap of water-resistive barrier (WRB) and cut a rectangle in the sheathing. I line the back of the sheathing cutout with a self-sealing flashing tape like Vycor Deck Protector. After the flange is mounted, I surround and lap onto the sides of the web with flashing tape for an effective seal. The tape directs water to the top lap of the shingle course beneath. Once the head flap of WRB is back in place, the seal is water-resistant. An additional bead of caulk can be applied between the siding and the bracket’s web.

My associate, Mac, and I spaced the deck brackets on approximate 40-in. centers so that we could use a single 2×8 to span between them. To keep the bolt holes away from the ledger butt joints, we positioned joints between brackets and used LedgerLok screws (fastenmaster.com) to connect a 3-ft.-long splice board on the back side of the primary ledger. 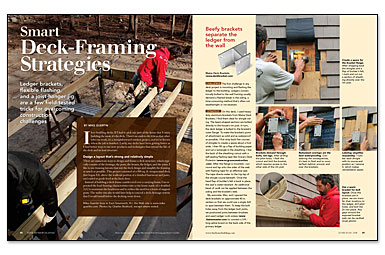