After the ceiling, walls are usually plain sailing—whether hung horizontally or vertically.

Once you’ve attached all the ceilings, it’s time to start working on the walls. It is usually a lot easier to hang walls than ceilings. You’ll probably have to make more cuts for electrical boxes and other openings, but at least you’re not working over your head. Before hanging walls, it’s a good idea to mark the location of the wall studs on the ceiling and floor to make them easier to locate once they are covered. Also, mark the location of electrical boxes and other openings that will be cut out after the drywall is attached.

As with ceilings, you can hang wall panels in one of two ways—horizontally or vertically. In commercial work, walls are often higher than 9 ft., so it sometimes makes sense to hang drywall vertically to reduce seams. On walls that are longer than 16 ft., hanging drywall vertically helps eliminate butted seams. However, for walls that are 8 ft. high or less (or 9 ft. high if I’m using 54-in. panels), I usually prefer to hang drywall horizontally. Here’s why:

To hang drywall horizontally, hang the top panel first, fitting it tightly against the ceiling. If the wall has a window, cut the panel to length, carry it over, and then use a utility knife to score the back side of the drywall at the top of the window opening. To save time, stand the panel on the floor exactly below where it will be attached, leaning it against the studs. Start nails about 1 in. down, lining them up with each stud. Lift the panel up against the ceiling and drive the nails home.

After the top of the panel is tacked in place, cut out any openings, including door and window openings. Then fasten the rest of the panel to the framing. Next, cut the bottom panel to fit against the top panel. This panel should be about 1/2 in. shorter in height so that it doesn’t fit tightly against the floor and break apart when it is fastened into place. Cutting the panel a little short also leaves room for you to slide a panel lifter or a prybar underneath to help lift the drywall into place. 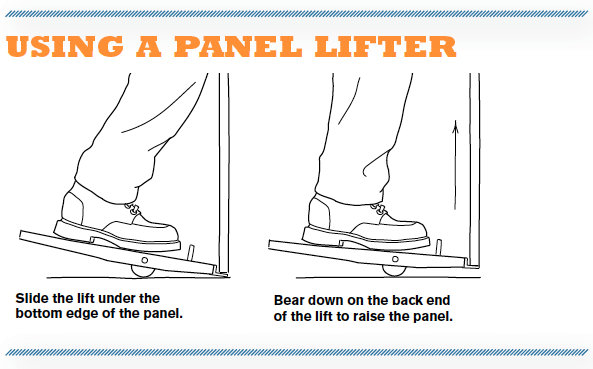 Most electrical outlets are located near the floor, so tack only the top of the panel in place, and then cut out the electrical boxes. Remember not to put too much pressure on the panel, which could cause the face to break apart around the box.

As with ceilings, butted seams should be staggered and placed away from the center of a wall. Butted seams can also be located above doors and above or below windows to create a shorter seam. Try to keep the seam at least 8 in. in from the edge of an opening, because the wall is more stable there. Also, the slight crown that forms during taping could affect the trim miter joint if the seam is located at the corner.

When hanging panels on an outside corner, run the panels long and trim them after they’re attached (you can use the same technique on a bottom panel that adjoins a door opening). Running the panel long means taking one less measurement, and it also allows for a little more flexibility. If the framing isn’t square or plumb at the outside corner, the panel can be cut to fit the exact angle so that there won’t be wide gaps under the corner bead.

For the gable ends of a room with a cathedral or sloped ceiling, I usually hang the bottom panel first (see the drawing below). The floor is a good flat surface from which to measure, and the bottom panel usually has a square end for at least part of the height. For longer runs it is a good idea to snap a line on the wall and install the drywall to the line, so that an uneven floor doesn’t create unnecessary gaps in the drywall seams. And remember to shim panels off the floor to allow for settling and to prevent potential moisture from wicking up into the drywall.

Setting the panels on top of each other makes it easier to hold them in place, especially when the ceiling is high. Note that you should not locate or fasten a butted seam on the center support of the gable end. The building may move or settle at that point, causing stress to the drywall. Don’t forget to think about where the seams will fall as you stack the panels up; you may need to start out with a panel ripped in height to avoid having a seam fall on a transition point or a header on the wall. 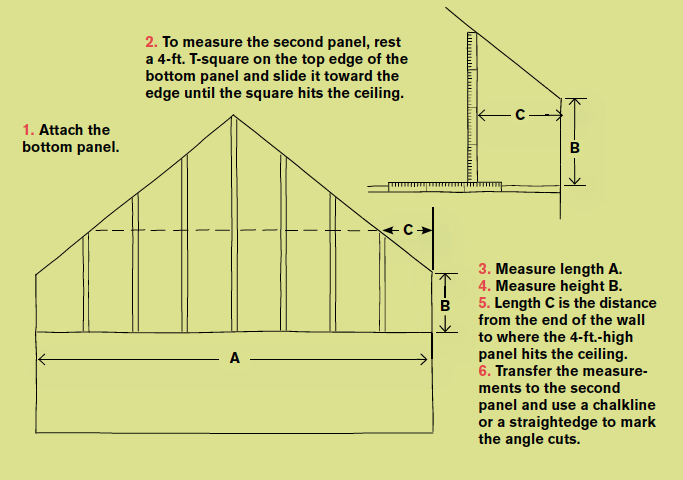