How to Hang Airtight Drywall

Drywall can stop air leaks when it's installed with caulk, foam, and adhesive.

Synopsis: If you want to make your house more energy efficient, the first thing to do is stop air leaks. Because drywall is great at stopping air, it can be part of a house’s air barrier when installed using the airtight-drywall approach. This approach, described in this article by contributor Myron R. Ferguson, makes use of caulks, sealants, canned foam, and gaskets to seal the seams between sheets and to stop airflow through holes cut in the drywall. Ferguson begins an airtight-drywall job by applying flexible caulk to all gaps in the framing and by sealing electrical boxes. He then hangs the ceiling, making sure to seal the holes he cuts out for junction boxes and light fixtures with caulk, and to seal the perimeter between the framing and the drywall with canned foam. Finally, he hangs the walls. Window openings are sealed with caulk and polyurethane construction adhesive, large gaps with canned foam, and small gaps with caulk. Ferguson demonstrated his technique at FHB‘s Project House, and this article includes a drawing that shows the exact locations where he applied caulk, foam, and construction adhesive.

Stopping air leaks is the single most important part of making a house more energy efficient. You can stop air on the outside with plywood, housewrap, and tape, but the best air barrier is a system that incorporates the whole wall or roof assembly.

As it turns out, drywall is excellent at stopping air. If you doubt that, try to blow through it. The weak spots are the seams between sheets and the holes that you have to cut for windows, doors, electrical boxes, and can lights. The process for installing drywall as an air barrier is called the airtight-drywall approach and it relies on caulks, sealants, canned foam, and gaskets to seal the weak spots.

The first step to airtight drywall is to identify what building scientists call the thermal boundary—insulation to us regular folks. The air barrier needs to be continuous along the thermal boundary. This is especially important where interior walls join exterior walls at rim joists or in places where chases are run for plumbing or electrical work.

We decided to hang drywall in the garage shop in FHB’s Project House using the airtight approach, partly to show you how to do it and partly so that the editors could make me do their dirty work. The outside of the house eventually will be covered with housewrap and rigid-foam sheathing. The drywall, therefore, is not the primary air barrier but is the interior part of an air-barrier system. 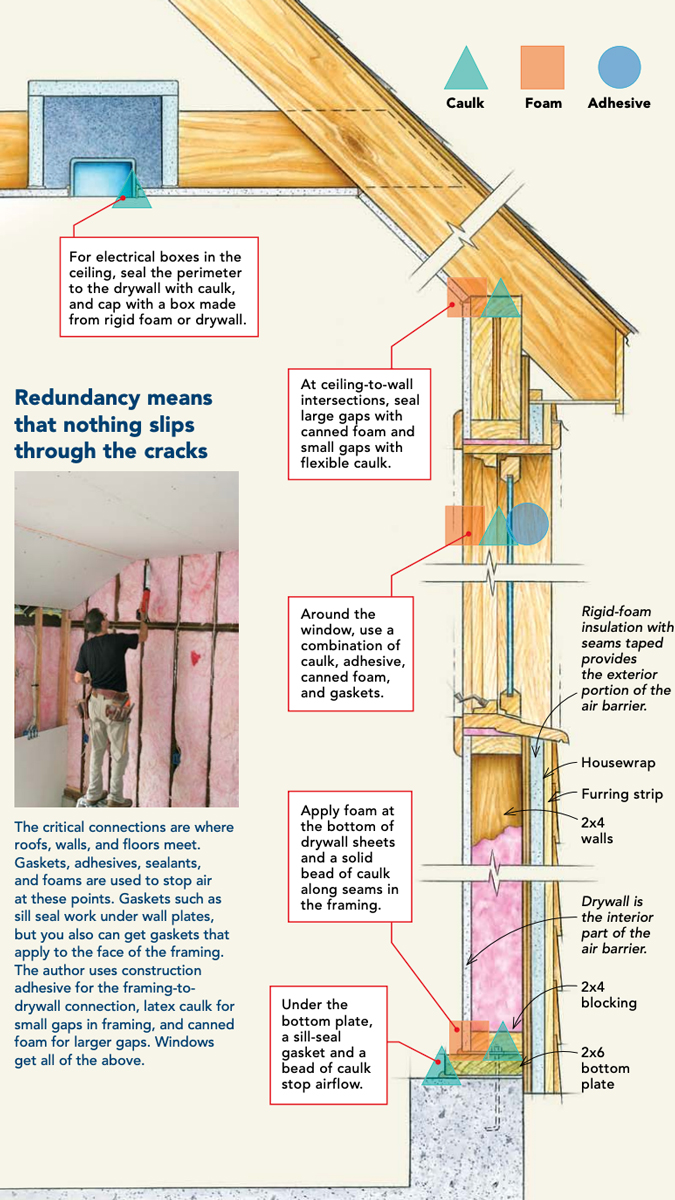 To seal up this garage shop, I used flexible caulk, construction adhesive, and cans of expanding foam. Various types of gaskets are also often used in airtight-drywall jobs. The most basic material, of course, is drywall. To minimize the number of seams I need to fill, I buy the longest sheets I can get my hands on—12-ft. sheets in this case. When hanging big sheets overhead, it’s worth considering the new ultralight drywall available from most drywall manufacturers. I wish that the editors had thought to order some of that for this job.

Flexible caulk is used around the perimeter of the walls and ceilings, around window and door openings, and around electrical boxes. It has to be flexible caulk; caulks that dry out over time can leave gaps. Likewise, if structural settling occurs, a caulk that stretches and flexes will help to prevent gaps from forming.

Construction adhesive runs along framing members. Bonding the drywall to the rafters, ceiling joists, and studs isolates each framing cavity, making a single leak much less of a problem down the road. One thing I really like about using a latex drywall adhesive is the amount of open time. You can apply the adhesive to the studs and have up to 30 minutes of open time to fasten sheets of drywall.

Expanding foam is useful for filling larger gaps such as where ceilings meet walls, where sloped ceilings meet flat ceilings, or where walls meet floors.

Another product that I use for airtight-drywall jobs is factoryshaped foam insulation that fits around electrical boxes in walls. I use Energy Blocks (www.energyblock.com), but other brands are available. For can lights and other ceiling-mounted fixtures, I make my own box with rigid foam or drywall.

Plan a strategy for tricky spots

This particular garage has 2×4 studs sitting on a 2×6 bottom plate atop a concrete-block stemwall about 10 in. tall. Before I came in, the editors placed 2×4 blocks in the bottom of each stud cavity. These blocks gave me a surface to glue the bottom of the drywall sheets to; without them, a considerable amount of air could flow through the gap. Another challenge on this job was that one of the walls had a big conduit running from the electrical service panel outside to the breaker panel inside. We removed the conduit’s fastening brackets so that we could slide a sheet of drywall behind it. After the drywall was sealed, the conduit itself could be boxed out. It’s unwise to box out a chase before drywall because this introduces long cracks to seal.

The garage ceiling is a broken cathedral ceiling, meaning that it slopes up to a flat expanse. The slope is about 51 in.; the drywall sheets are 48 in. Rather than hang a 3-in. strip, I cut a foot off the full sheets so that I could put up two larger pieces, which made taping the ceiling easier.

At the transition between the sloped ceiling and the flat ceiling, there was no solid backing for adhesive. There are a couple of ways to deal with this problem: Apply solid blocking, as we did at the bottom of the wall, or use canned foam to seal the gap after the ceiling has been hung. The best approach is to add backing, but because we added blocking at the bottom of the wall, we used canned foam on the ceiling to illustrate both approaches.

Some tricky spots may not become apparent until you are actually hanging the drywall. In old houses, framing may not be perfectly square, so you can end up with oddly shaped gaps at the butt joints. Fix such a gap by cutting a drywall scrap to fit, screwing it into position, and filling it with drywall compound.

Installation is not all that different

As with typical drywall jobs, I hang the ceilings first, then the walls. When applying caulk and adhesive to the framing, do not skimp— goop it on. This is not the place to save money on a job. Run the bead beyond where the end of the sheet will land. This will keep the seal continuous from one panel to the next.

When placing the sheets, be careful not to smear the caulk and adhesive too much. The framing is only 1-1/2 in. wide, so smearing the sealant can compromise the integrity of the air barrier significantly. On ceilings, align the edge of the sheet you are hanging against the one you are butting it to. Snug the sheet into place, pushing it tight against the framing without sliding it back and forth. Cutting the sheets 1/4 in. short is a good way to ensure that they will fit. On walls, prevent smearing the sealant by tilting the panels into place top first, holding the bottom away from the framing. When the top is in place, push the sheet against the framing, bedding it into the adhesive. Seal the perimeter between ceiling and walls with caulk or canned foam after the hanging is complete.

Properly fastening the drywall holds it tight against the framing and sealant, making a tight air seal. The best way to fasten drywall is to begin along one edge, then move toward the center, fastening the other edge last. This ensures that the center of the panel is tight against the framing. For panels that cover electrical boxes, tack the sheet in place, cut out the box with a router, and finish fastening the panel. For large sheets, I screw off the top edge of the sheet before cutting out the boxes. For smaller pieces, I may fasten a top corner and the opposite bottom corner first.

When using a router to cut around electrical boxes, be patient and careful with your cutting. This may take an extra minute, but it will save a lot of repair work later. When cutting out boxes overhead, I turn off the router before removing the bit from the drywall so that the router will not blow drywall dust in my face. Brush out the dust left behind from the router before sealing the box opening with caulk.

Corners, intersecting walls, and other obstructions

The best corners are floated so that the drywall is not attached to wood that could form a drywall crack. To pull off an airtight-drywall job in this situation, install the first sheet into the corner without fastening the edge to a stud. Only caulk it. Next, apply a bead of caulk to the edge of the first sheet and bed the second sheet into it, fastening the edge into a corner stud. Use drywall clips if there is not a stud within 10 in. of the corner. For plumbing or conduit runs, such as the large electrical conduit in this shop, slide the drywall behind the pipe, and box it out later. Intersecting walls pose a similar problem: A poorly detailed intersection amounts to a huge hole in the air barrier. It is important to make sure that the drywall air barrier is continuous in these places.

After hanging the room, fill the gaps

One of the great things about drywall is that the seams don’t have to be perfect. Gaps can be filled with foam and mud. After the ceiling and walls are hung, go along the perimeter and fill gaps with foam or caulk. For gaps larger than 1/4 in., use expanding foam; for smaller gaps, use caulk. Big globs of caulk will make the taping job a nightmare, so smooth the bead with your finger before it sets up. Likewise, cut off foam after it cures. To complete the air seal, tape the seams and the inside corners as you would for any other drywall job.

Hanging the ceilings next 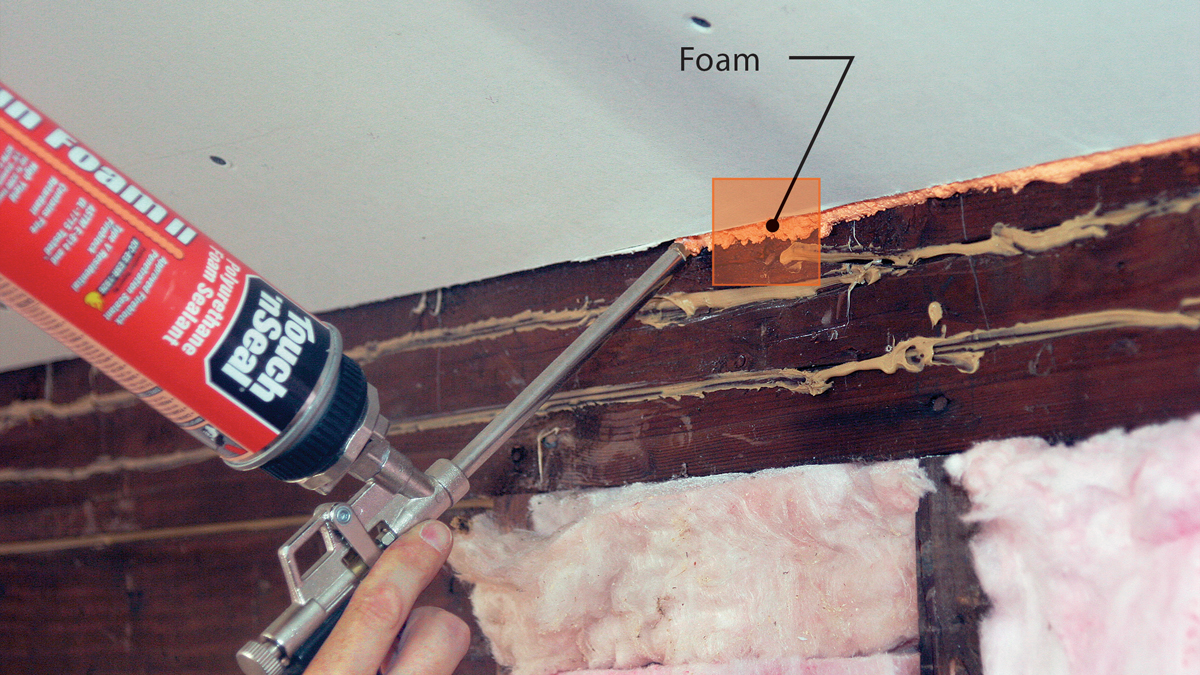 Seal the perimeter. After completing the ceiling, apply canned foam along the  perimeter gap between the framing and  the drywall. Let it expand, and cut it off  before hanging the walls. Notice here that gaps between framing members were sealed with caulk before hanging any sheets. 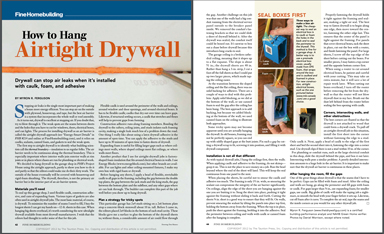