How Much Insulation Is Too Much?

Martin Holladay shares insights from industry experts about when envelope improvements are a waste of money and how to determine when enough insulation is enough.

Adding insulation in a house saves energy, but with each extra inch, the savings per inch diminishes. At some point, the cost of adding more insulation becomes hard to justify. At this year’s BuildingEnergy conference in Boston, three energy experts explored two questions regarding high-performance houses: At what point are envelope improvements a waste of money? And what metrics should we use to determine when enough insulation is enough? One point to these questions was to determine whether the thick levels of insulation required by the Passive House standard, an approach to superinsulation developed in Germany that is gaining traction in the United States, were justified. Because of the declining cost of PV, all three reached the same conclusion: They are not.

The three presenters were David White, an energy consultant from Brooklyn; Marc Rosenbaum, director of engineering at South Mountain Company in Massachusetts; and Rachel Wagner, a designer at Wagner Zaun Architecture in ­Duluth, Minn.

In this case study, the criteria were  somewhat flexible. “We were aim­ing for a marginal payback of about 25 years,” White noted, “and we chose some measures that had a payback of 25 years even if the measures cost more than PV.” While White didn’t explain his ration­ale for choosing the more costly ­options, typical reasons for such ­upgrades include providing insurance against future energy-cost increases, provid­ing greater comfort or resilience, acknowl­edgment that insulation has a longer life than PV modules, and insurance against future changes in net-metering agreements.

White performed the calculations two different ways, using the unsubsidized PV cost of $4.35 per watt and then with the actual PV cost of $1.26 per watt, which reflects available rebates and tax credits. “Subsidized PV was much cheaper than every [energy] measure we looked at,” said White.

After performing these calculations, White’s team made a few commonsense adjust­ments to favor envelope improvements that cost a bit more than PV, settling on the following specifications: 6 in. of EPS under the slab on grade; 8-1⁄2 in. of mineral-wool batts in the walls; and 16 in. of cellulose above the ceiling.

It’s not about space heating

The next speaker was Marc Rosenbaum, who noted this about most of the high-performance residential projects that he has been involved with: “The heating load is a small percentage of the home’s total energy use. The point is, you think that heating is what you have to deal with. But really, if you are paying attention to heating, you also need to be paying attention to other things — hot water and plug loads.”

Although designers of high-performance houses often factor in the heat generated by electric devices, Rosenbaum warned that they shouldn’t assume that all of the electricity used by lighting, appliances, and other plug loads reduces the home’s heating load. “Clothes-dryer electricity doesn’t go to offset heat,” he said. “Well pumps don’t go to offset heat.”

As a case study, Rosenbaum looked at a hypothetical house in Concord, N.H. (climate zone 6), measuring 24 ft. by 36 ft., with 2-1⁄2 stories and a full basement. He assumed the use of a heat-pump water heater with a coefficient of performance (COP) of 2.5 — meaning that the heat pump produces 2.5 times as much energy as it consumes — and the use of minisplit units with a COP of 2.5 to provide space heat. He also assumed that the occupants would use 400kwh per month for plug loads, lights, and appliances, with 50% of the electricity use offsetting the space-heating load. Rosenbaum explained that 400kwh is low but not unreasonably so for a homeowner who wants to get to net zero and so is paying attention to electricity use.

The most remarkable thing about the annual energy use of these very different houses is how little difference there is ­between the worst house and the best house. “Energy used for hot water is constant, and energy used for plug loads, lights, and appli­ances is constant,” Rosenbaum noted. If a homeowner wanted to add enough PV to achieve net zero, the worst house would require a PV system rated at 7.0kw, while the best house would require a PV system rated at 5.9kw. The smaller PV system required for the super-duper house would save only $3850 compared to the cost of installing the larger PV system needed for the code-minimum house. Needless to say, the cost to install R-60 wall insulation, R-90 roof insulation, and low-U-factor windows would be far more than $3850.

Same results in the coldest climate

The last expert to speak was Rachel Wagner. Wagner designs houses for climate zone 7 (the coldest climate in the lower 48 states). She has designed more than 40 low-energy houses over the last 15 years. Most of her homes have R-5 to R-6.25 windows, R-27 to R-35 underslab insulation, cavity insulation in the walls ranging from R-21 to R-34 plus continuous exterior-wall insulation ranging from R-11 to R-28, roofs with R-70 to R-80 insulation, and air-leakage rates of 0.23 ACH50 to 0.80 ACH50.

Wagner adds between 40% and 60% more insulation than required by code, which ­reduces future energy bills, of course, but also increases construction costs. In climate zone 7, these very high (and expensive) insu­lation levels make sense, but they still fall short of Passive House requirements.

Wagner noted that these houses have a peak heating load of 7.5 Btu/hr to 8 Btu/hr per sq. ft., which is roughly half that of a code-minimum house, but a far cry from a Passive House. The Passive House standard requires a peak heating load of no more than 3.17 Btu/hr per sq. ft. The ­energy savings that would flow from hitting this target are too low to justify the extremely high cost of the insulation needed to achieve it.

Wagner advised, “Recognize that the cost of building the enclosure is going up, but the cost of PV is going down.” She also noted that efficient technologies like heat-pump water heaters and air-source heat pumps are getting better. Because of these trends, she advised not to overinvest in initial systems: “Design so that equipment and systems can be upgraded.” 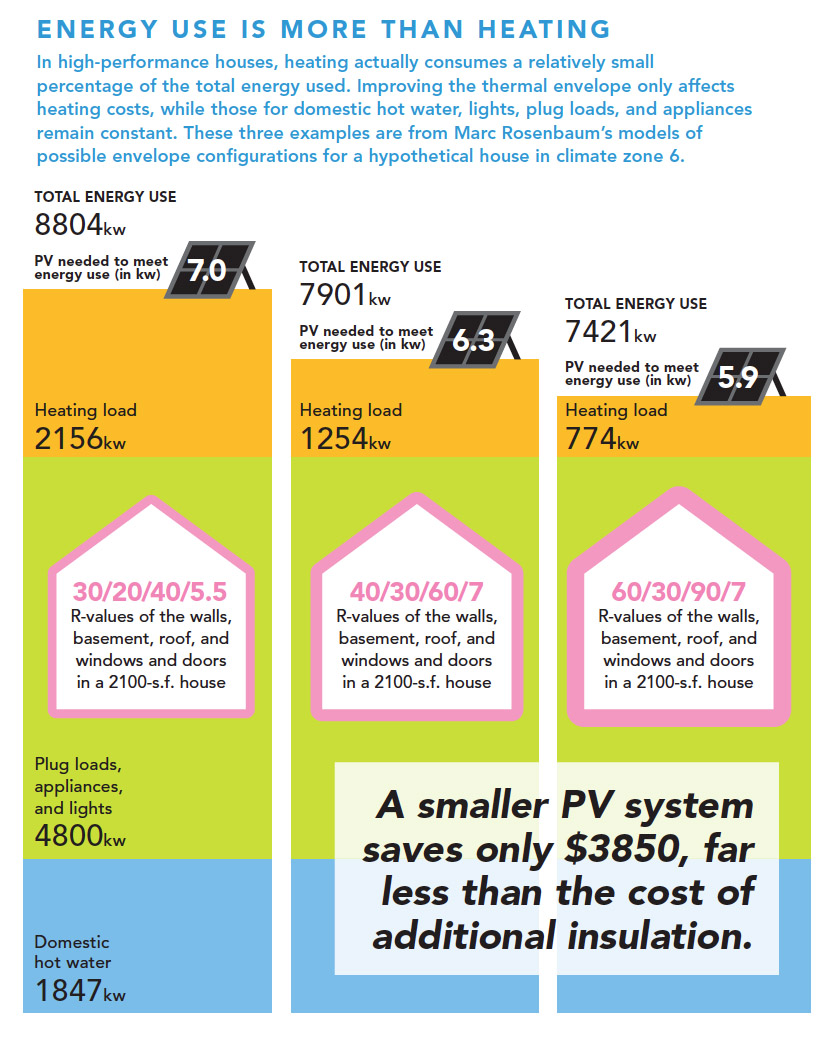 View PDF
Previous: Insulating Beyond the Code Next: Understanding R-Value