This project did much more than improve a kitchen: It improved an entire house in function, flow, and style.

In contrast to more traditional homes, which tend to shut out the site, this midcentury modern house attracted Amy and Matt Collins because of its many views of the wooded property. The living areas are wrapped mostly in glass, so the open interior living spaces are brightly lit. And because it was affordably priced, they knew they’d be able to make improvements in the future. Their first project was to add a master suite and a studio for Matt, who is an illustrator and works at home. They knew they’d need to address the outdated and clunky kitchen soon after. When a tree fell on the house and damaged the roof above, they took the opportunity to remodel all of the living areas.

It was easy to see what was wrong with Amy and Matt’s kitchen, and it was more than just the kitchen itself that wasn’t working. There were big problems to solve that included the surrounding dining and living rooms, and the entry too. The existing kitchen—built circa 1980—had a narrow Pullman-style layout, which dead-ended against a bathroom wall. The cabinetry was ubiquitous (and pretty ugly) ’80s white laminate. With the kitchen located right next to the main entry door, it was the first thing visitors saw when they came in the house.

While it was open to the dining area, the kitchen’s narrow width made it difficult for more than one person to use. And there was no place for family or guests to hang out with the cook. Because the existing kitchen was located on an exterior wall with big windows, there were few upper cabinets. The open shelves­, exposed to the adjoining hallway, meant dishes attracted dust and required vigilant arrangement. Finally, the living areas adjacent to the kitchen were a bit too open to the home’s private areas, with one bedroom door practically in the living room. A redesign of the kitchen layout and surrounding areas would go a long way toward fixing
this problem.

Amy and Matt needed an expanded kitchen, improved storage, and a more elegant and defined entry space. They wanted room for helpers in the kitchen and a place to visit with the cook without interrupting the work triangle. On their wish list was a 36-in. commercial-style cooktop and double oven. Preserving the house’s open plan and maintaining large windows with broad site views was a must.

To meet these goals, we added 312 sq. ft. to the house, moved the kitchen away from the exterior walls, and relocated the entry. Not only does this arrangement give the kitchen the space it needs, but it also helps define the other spaces within the house, including the dining and living rooms, while still keeping them connected to one another.

To draw a more distinct line between the living areas and the more private spaces, we relocated two bedroom doors. We also renovated the existing bathroom, shrinking it from a full bath to a powder room for guests to use, and added a new full bathroom deep within the home’s bedroom wing.

A budget with style

The house is a timber frame, and Amy and Matt were interested in maintaining, if not emphasizing, that aspect of the design. Though we built new partition walls for the kitchen, we kept them short of the ceiling. In this way, the roof rafters remain continuously exposed through the living space. We did not modify the structure; we worked around it, even leaving a post at the corner of the kitchen island. The only place we added to the timber frame was where we needed to extend the roofline, which we did using welded steel hangers to match the originals.

Stained cherry, black granite, and stainless steel dominate the material palette. The cabinet hardware is oil-rubbed bronze by Colonial Bronze, a local Connecticut company. These materials provide a neutral and timeless design, are easy to maintain, and will age gracefully.

Amy and Matt realized their dream with a Thermador six-burner gas cooktop and double oven. The granite counters and Lightyears pendants over the island are certainly a luxury, but, given their prominent placement and the fact that we weren’t spending much more on lighting, we all decided they were worth the money. We also spent a good portion of the budget on custom fir windows from Quantum Windows & Doors. The new, insulated windows minimize the energy penalty of all the glass, particularly compared to the original single-pane units.

We took a few important steps to save money. The walk-in pantry is a simple stick-framed closet with site-built shelving, as opposed to more pricey cabinetry. It also serves as a room divider. The semicustom cabinets are all common modular sizes, and we avoided unnecessary trim. The fridge is a standard-counter-­depth unit. The stainless-steel panel and 4-in. granite backsplashes are more economical than tile.

This project did much more than improve Amy and Matt’s kitchen—it improved their entire house in function, flow, and style. And the house is more midcentury now than it was when it was built in the midcentury.

Rob A. Sanders, Jr., AIA, is principal at Rob Sanders Architects in Wilton, Conn. Photos by David Sloan, except where noted. 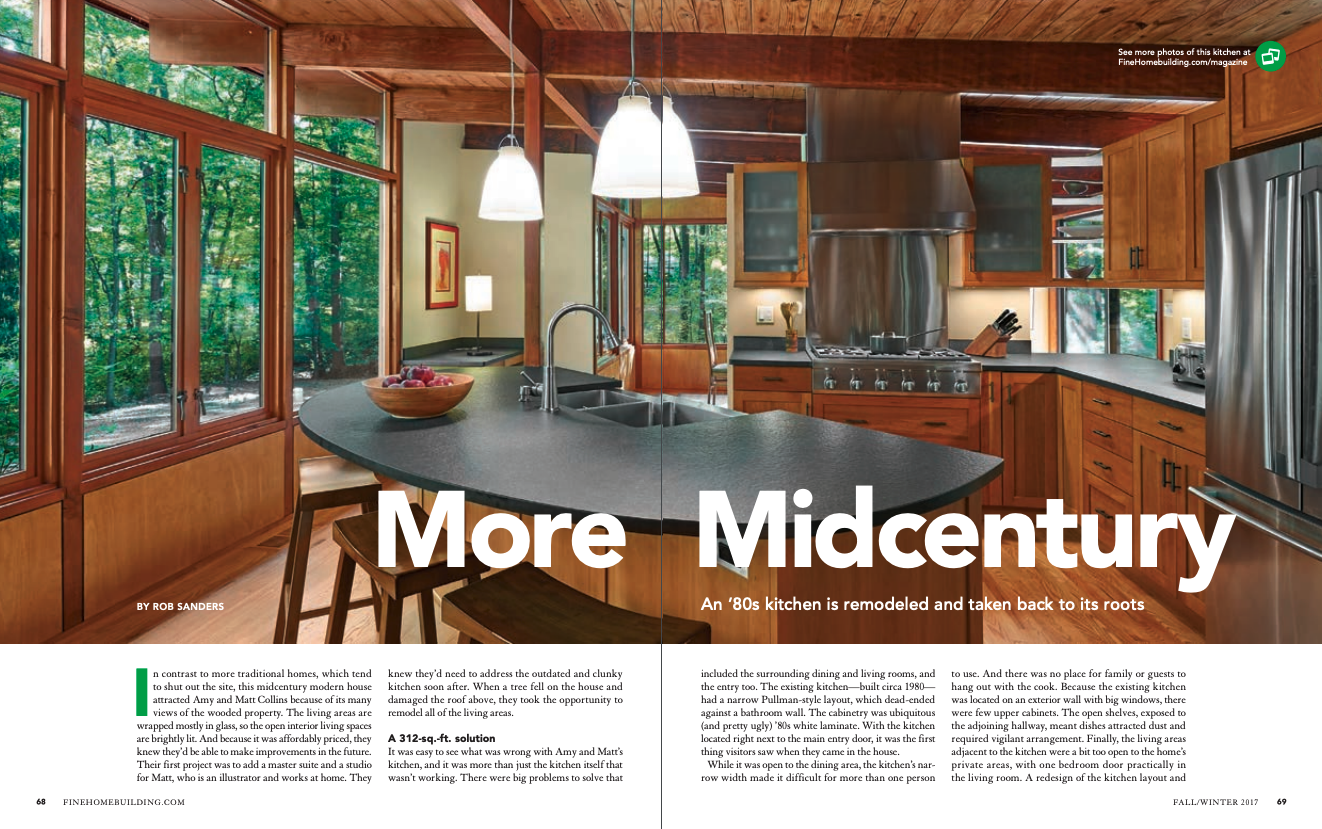