When thinking about a house’s curb appeal, designers and architects often pay close attention to the front elevation and look carefully at wall composition. The roof, however, typically doesn’t receive a second thought. Why not organize the elements on the roof as carefully as you would the windows, the doors, and the siding?

Larger elements such as a chimney or a skylight appear in the architect’s drawing, but we rarely draw the other elements. Where are the plumbing vents, the appliance flues, the range-hood exhaust, the whole-house-fan and bathroom-exhaust-fan outlets, the electrical-service weatherhead, and the tubular skylights? It’s easy to ignore these items because they tend to clutter the drawing. And it’s hard to pin down their exact position before rough framing is complete. The locations are limited by the building structure, the roof framing, the locations of fixtures and equipment, and the limits on flue offsets and lengths of piping runs. To avoid a cluttered and haphazard-looking roof, however, you need to plan for and organize these elements.

I like to show the locations clearly and to note all known penetrations on the construction drawings. By putting a good eye on the composition of the roof beforehand, the intentions for locations are conveyed, and the trades aren’t left to determine the best placement based on a “convenient location.” I like to have all the trades check in with me before they begin work. Typically, I put a bold reminder on the drawings and in the specifications that says, “Confirm all roof penetrations, locations, and sizes (with the architect) prior to rough in.”

Then I work with the contractor and his subs to determine the best locations for these items. I often am reminded of code limitations, but by working as a team, the contractor, the subs, and I usually come up with creative solutions that work well and look good.

I like to think of it as arranging furniture. By orchestrating the hierarchy of elements and by using alignment and balance, you can compose the roof. The drawings show the guidelines I use to place roof penetrations.

A cluttered roof is distracting

Roof penetrations should receive the same organization and attention as the rest of the house. If all the plumbing, heating, and appliance penetrations are roughed in via the easiest, most-direct path through the framing, the final roofscape will appear cluttered and distracting. 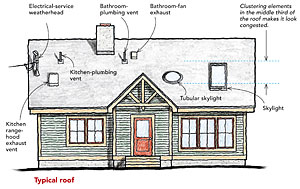 Devising a simple organizing system for roof penetrations improves the entire front elevation. Start by considering the locations of the largest features, such as chimneys, large appliance flues, and skylights. I like to divide the roof horizontally into thirds and prefer to keep the middle third clear. (Large skylights often intrude into this space.) Then I look for ways to move other items, such as plumbing vents and exhaust hoods, off the front roof. 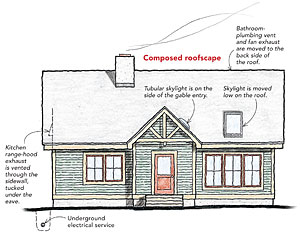 When roof elements are aligned with windows below, they are where the eye expects them to be, and the placement looks appropriate. Aligning roof penetrations with each other both horizontally and vertically helps to establish a sense of order and reduces the sense of congestion.

The degree to which penetrations become a point of focus can depend on the house’s site and the roof pitch. If the approach to the house is at a higher elevation than the front entry, the roof takes on great visual prominence. The same goes for steeply pitched roofs, even if the site is level. A shallow roof pitch, as on the modern colonial shown here, minimizes the roof’s impact. 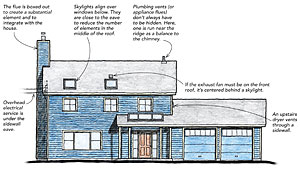 Reducing the number of flues, vents, and exhaust hoods poking through the roof not only improves the roof’s appearance but also reduces the potential for leaks. One way to minimize the number of penetrations is to gang plumbing vents before they exit the roof. After you check local codes, a little planning will determine which vents can be ganged and routed to the rear of the house. In some circumstances, an air-admittance valve can eliminate a kitchen vent stack [for more on this, read Vent an Island Sink …and Other Tricky Spots  from Fine Homebuilding issue #174 (Oct/Nov 2005), pp.56-57]. To limit the visual distraction of vents or other roof elements further, choose a color (or paint them) to blend in with the roof. 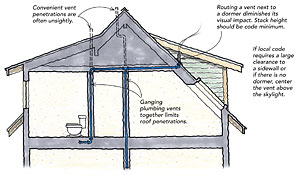 Push skylights toward eave and ridge

Keeping the middle third of the roof clear by moving skylights toward the roof edges can improve the view from the outside, but the skylight needs to serve a specific lighting strategy on the inside. Using a splayed lightwell lets you manipulate the roof location of the skylight and still get the light where you want it. The angled walls of the well bring light deeper into the room. 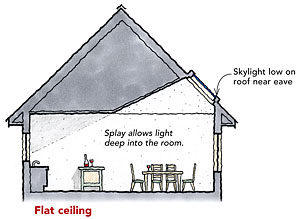 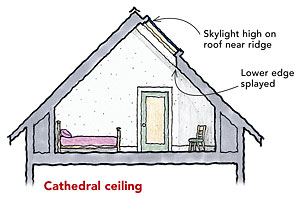 Previous: To Create a Clean Roofline, Design from the Roof Down Next: Roof-Framing Design